No idea what year it was. I do remember being a little scared. Maybe more than a little. It was off-season. It was quiet. We were at Jones Beach on Long Island. My little brother was swimming and had disappeared. I needed help from my girlfriend (now wife of many decades) spotting his tiny head. What to do? Cell phones were yet to exist. No lifeguard. I had to go get him. I certainly wasn't going back to my parents without him.

By the time I reached my brother, he admitted that he was in some trouble. We were so far out that the shore was only visible when we rose on the highest ocean swells. I did know that if the sun was on my left, then I was headed north. We stayed together, hoping we were not drifting the wrong way. It took all afternoon, but we finally did make it back to shore a little off course. Once on the beach, it took a very long time for either of us to gather the strength to stand. No fun. No fun at all. Know what? I still have a little brother.

The Pit or The Pendulum?

At one point on Tuesday afternoon, US ten year paper gave up more than 3.09%. Had the ten year simply gone too far out, too quickly? The culprit was not just the April Retail Sales report, that really printed in line with expectation, or actually missed if autos are omitted from the data. It was more the strength in the revisions, as well as the pricing numbers seen within the Empire State Manufacturing Survey. That robust pricing has now been seen across all of the regional manufacturing surveys for many months now. Weak month over month numbers for both the April PPI, and the April CPI that makes inflation seem benign? Bah! That was so "last week". The real deal was the Atlanta Fed upping their snapshot of Q2 GDP from 4.0% to 4.1% annualized. This has pushed market expectations for a fourth rate hike in December on to the front burner.

This morning, that same ten year yields more than 3.06%, while the two year note yields 2.581%. The 2/10 curve has "steepened" to slightly more than 48 basis points. Two questions arise.

2) Do the financials finally get the boost that investors in that space have been waiting on?

Taking a quick look at ETFs covering the space, performance appears to increasingly improve the more one compartmentalizes. The Financial Select SPDR ETF (XLF) actually closed lower on Tuesday despite the action in treasury markets. However, the SPDR S&P Bank ETF (KBE) did rise 0.5%, while the SPDR S&P Regional Banking ETF gained 0.66%. Hmm, traditional banking did benefit. Yet, banking big shots such as JP Morgan (JPM) , and Goldman Sachs (GS) surrendered some territory. This despite the fact that they will likely benefit from any easing of the Volcker Rule as much as a broadening of the 2 year/10 year spread does increase net interest margins.

.... Oh, the Atlanta Fed will step to the plate again today after the numbers on Housing Starts and Industrial Production hit the tape.

How I Am Tackling This

Citigroup (C) , Wells Fargo (WFC) , and Bank of America (BAC) all closed in the green on Tuesday, but none in significantly grand fashion. I am not touching WFC at this time. They can prove themselves first. I remain long Citigroup, JP Morgan, and Goldman Sachs. Citi based on valuation, and on the firm's stated intent to repurchase $20B worth of shares over a couple of years, and JPM basically because of their solid balance sheet, and broad global exposure. Both of these firms should benefit not only from deregulation, but from the Fed's stress test results next month.

(JP Morgan, Goldman Sachs, Citigroup are part of Action Alerts PLUS, which Jim Cramer co-manages as a charitable trust.)

Goldman is a more curious case. I recently reloaded this long close enough to the May lows after dumping 40% of my stake on the earnings pop of 17 April, and am now running at nearly 120% of my intended size. The name has clearly been tradable, but appears to be in a downward trend. Why am I overweight a stock in a down trend? Easy. For one, I believe that the headline driven volatility that we have seen will be something of a constant going forward. Goldman will, in my opinion best profit from trading this environment. Deregulation will also aid this firm as far as that goes. 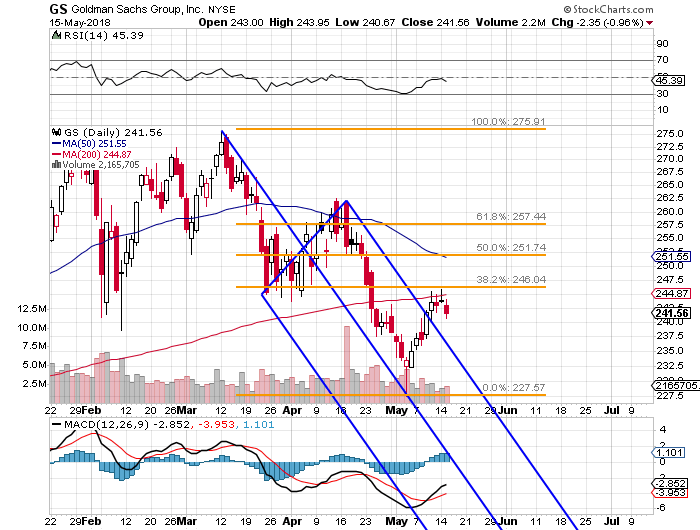 Quick observation allows the trader to notice this stock's breakout of the Pitchfork model that had been in place. That's positive. What's negative is that GS hit a stone wall at a 38.2% retracement of the March through May descent just as stiff as was Jackson's brigade at First Manassas. What to do now? Almost nothing. Should the name make a second attempt at that 245 level, I'll look to take the profit on the portion that I am overweight the stock and return to a full position. Then I wait at least until next month for my thesis on this stock to work.

Sarge, I'm Coming in Flat and Volatility Scares Me

How about this thought. Of these three giants, Citigroup trades at the cheapest Price to Book. JP Morgan trades at the highest forward looking PE ratio, sports the best three year sales growth rate, and pays the highest dividend yield of the three. Know what? If we add Bank of America to my short list, and make this a four horse race, they do not finish last in any single category, and with such a large domestic retail level of exposure, those expanding net margins just might end up being bountiful. Let's consider BAC. 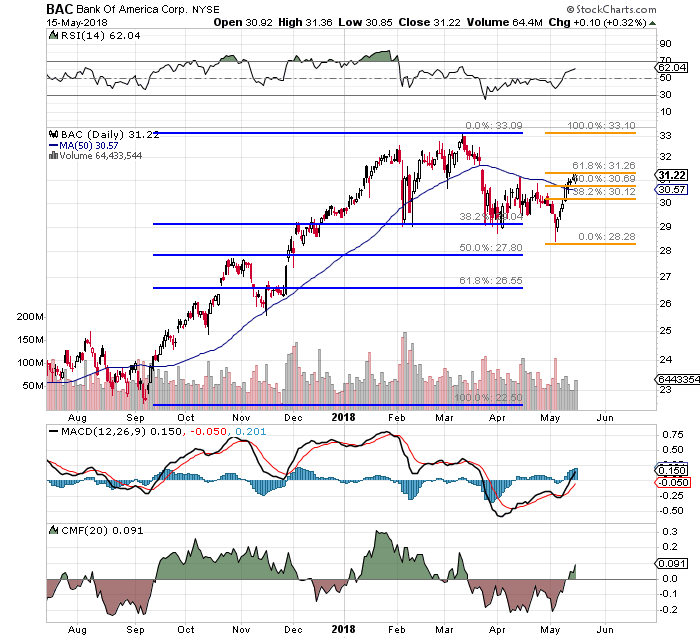 Whoa. How interesting is this? How sharply has this name obeyed Fibonacci levels that supplied $29 support coming off of the March highs, as well as 31.25 resistance coming off of the may lows? Daily MACD, Money Flow, and Relative Strength all appear supportive.

What seems plain to me is that we either see a double top around 33.10, or a triple bottom close to 29. I would rather wait to see support instead of resistance at 31.25 in order to take an equity stake. This might have the trader forfeiting some P/L, but could just as much end up saving that same trader from having to average down once than worm turns against. This is what a more cautious trader could do relatively inexpensively.

Keep in mind that the results of the Fed's stress tests are due after the closing bell on June 22, and on June 28. On top of that, BAC reports Q2 earnings prior to the open on Monday, July 16.

In plain words, under this scenario, you need to see at 31.97 in the wake of those stress tests in order to profit. You will also be exposed to having equity put to you at 29, which looks good (right now) on the charts. Is this perfect? No, but the trader has avoided taking on equity risk at the last sale, while exposing him or herself to the upside should the stock find support here and break out. The target price would be that same 33.10 level.

Get an email alert each time I write an article for Real Money. Click the "+Follow" next to my byline to this article.
TAGS: Investing | U.S. Equity | Financial Services | ETFs | Funds | Economic Data | Markets | Stocks

The Charts Say, Give Mastercard Some Credit