There is a lot of speculation surrounding the homebuilding, remodeling, and flipping businesses, such that many investors are feeling the urge to join in on the fun. The problem is that these trends are not new, so the opportunities for easy gains are getting fewer and farther between.

We can actually see this objectively, using the DSE (decision support engine) that members of our live-market Trading Room and DSE Alerts benefit from daily, and we share with readers of these pages from time to time. Let's take a look at the warning signal to exit long exposure in PulteGroup (PHM) that was issued last week, around $23.

First, notice the glaring cross down that the monthly stochastics study just created as its red line fell down through the green line. That hasn't happened from above the 90% overbought extreme since 2013, which led to a 39% decline in the next three months. 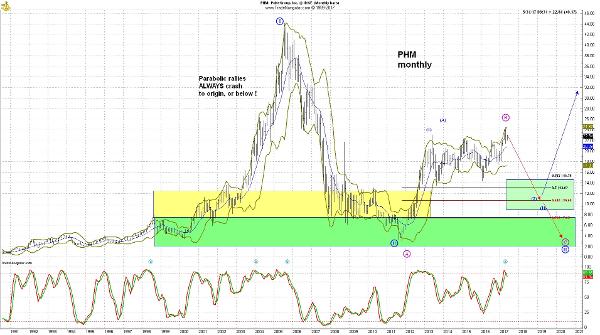 Next, see the price bars trying, and failing, to get above the upper two-standard deviation band (olive/gold line near $24), which controls 95% of normality. In 2013, price actually got above this statistical extreme, but couldn't hold there. The current overbought extreme is tremendous, but not quite at that level, as no move above this measure has occurred.

Higher highs in price, now vs. then, with lesser momentum suggests a bearish divergence that typically ends in prices declining for many months. Even more so, the shorter-term daily degree of trend (not shown here) shows price reaching the upper three-standard deviation band, which controls 99.7% of normality.

The price pattern off the 2013 low is very overlapping and choppy, which is the telltale footprint of a corrective move. So, even though the price is higher than 2013, the rise off the 2011 low is not even close to the all-time peak in 2005 -- the Golden Age of real estate speculation.

Therefore, the price behavior mandates that the entire rise off the 2011 low be labeled as the final leg of the rising corrective pattern that has served to relieve the oversold condition of the crash from 2005 to 2009. Once complete, the path of least resistance will be for a new decline to take prices toward the $12 zone, with more bearish potential toward the $5 zone.

Combining these few indications of overbought price extreme, the only actions that are objectively optimal here are selling actions. Hence, using a close below $22 should be considered as your risk level if you are long this name, exiting all shares below there. If flat, that level can be used to establish short exposure, with $24.50 as your protective buy stop limit.

From the current price, near $23, this gives a risk of 1.5 points and a reward of at least 11. That kind of opportunity doesn't present itself very often. So, when it does, it should be seriously considered.