Might stocks now fall down? The action across equity markets did get a little sloppy on Monday. The three major indices all finished in the green, though well off of their highs. The small-caps did not fare as well, as the Russell 2000 closed down 0.4% on the session. Breadth was negative. The question becomes this morning, will investors be shaken out if we see what might end up being a normal round of profit-taking?

There are some clear positives to be sure. Inflation appears less scary than it did only recently. The Trump Administration looks to be making progress on trade negotiations with both China and Japan. The use of ZTE (ZTCOY) as a bargaining chip may have just been one of the best classic chess moves of modern times.

Still, the U.S. 10-year Treasury Note wrestles with the 3% yield level. More than once now, we have seen this area display support. This morning, there is some market pressure here as that spot has been pierced yet again. Market participants may not understand it, but I don't think we really want to see support come in at this spot yet again. Should markets allow the 10-year to move to the 3.2% or 3.25% area, then the curve would be permitted to steepen a bit, which would end up being better for financials, and better for the economy as such credit conditions might just end up providing more of an actual market on the local level. The strength seen in last week's $25 billion auction of 10-year paper felt good, but such strength could actually be counter-productive in the medium to longer term.

Today's April data for Retail Sales could tell us something significant, as could Wednesday's numbers on Industrial Production and Housing Starts. All of these data points will impose a more serious impact on second-quarter GDP expectations than any domestic economic number that we have seen since early May. The Atlanta Fed's snapshot of secon-quarter GDP projects at 4% right now, which is likely unsustainable. Futures trading in Chicago are now pricing in a greater than 50% chance of that fourth rate hike in December. This effect is what you want to watch as our morning evolves over the next half day or so.

The Home Depot (HD) reported quarterly data this morning, This forces me to think of industries, or corporations that sort of wear a bullet-proof vest when it comes to disruption via e-commerce giant -- and "Death Star" -- Amazon (AMZN) .

I wrote on the oil industry as well as the energy sector Monday. This is probably, given the infrastructure required, the capital expenditure, and then the transport, one industry that Amazon would not even have the least interest in, at least not for a very long time. I don't think one has to worry about Amazon entering the exploration, production, or oil services fields any time soon.

Now transportation is a little different. Parcel delivery via roads, or aircraft is something that Amazon has made some noise on, but not the rails. As most of you know, my railroad pick has been CSX Corp. (CSX) , but all of the large, publicly traded rails are valued in the ballpark of 16 times next year's earnings estimates, and in a growing economy (that includes pricey market conditions for crude), the rails could outperform (Just my opinion).

How about smartphones? We hear all the time about Apple (AAPL)  and iPhone shipments. Every time these numbers roll around, the entire market changes direction. Amazon did try to enter this business line. Remember the Fire Phone? Yeah, me neither. That was Amazon's entry. Four years ago. I doubt you know anyone still using that product, or ever did.

Back to Home Depot. The online business has been a significantly growing slice of Home Depot's business. Of course, Amazon can sell you plenty of what Home Depot can. How can a retailer make a stand against this giant? There are several reasons.

The truth is that when you need lumber (I used to sell lumber, you like to look at it, even feel it). Water in your basement? Run to a store to purchase the necessary equipment. Log on? No.

When re-decorating, you choose doors, windows and appliances by looking at them, and touching them. Not by looking at a picture on a mobile device.... unless you're an idiot.

Realize that your home has been invaded by carpenter ants? You take care of that immediately. Even two-hour delivery is far too slow when the spouse is freaked out by hordes of carpenter ants.

The numbers are out. Expectations for earnings growth of 23% were beaten. Revenue growth printed up 4.4%, which missed expectations of 6%. Home Depot maintained guidance for the full year. That surprised me a little.

I am long this name and was worried about guidance. This spring has been awful across much of the nation. Temperatures have been below normal for something like eight straight months now. It's mid-May, and nobody on my block has had to start taking care of their lawns yet. I take care of my own lawn care needs, like everyone else, at Home Depot. I simply have not had to take care of the weeds or the insects in 2018. I can't be the only one.

This persistently inclement weather that has gripped much of the U.S. has to push out seasonal product sales at a firm like this. This is likely a prime reason for the tapering of comparable same-store sales that we just saw. The shares are selling off on the knee-jerk. I will remain long. 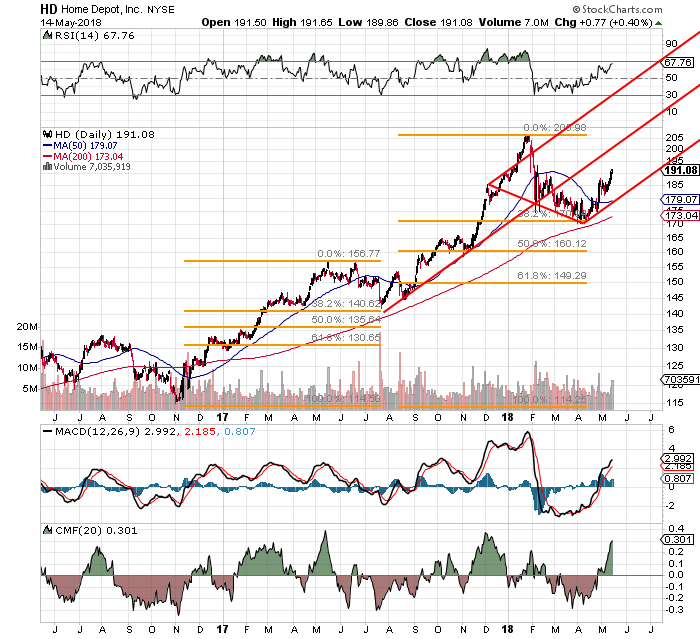 One quickly sees in the chart, above, that HD has twice found significant support at a 38.2% re-tracement of the move off of the election day 2016 low. The winter swoon of early 2018 destroyed a nice Pitchfork model that I will not show here due to the fact that I did not want to congest the screen. What I did want to show you was the possible formation of a new Pitchfork given the early April support.

My thought is this. I will not be selling these shares on this morning's weakness. Below $185, I will certainly look to add to my stake. The test comes at $178, which is where the 50-day simple moving average, and the lower bound of this Pitchfork collide.

The Home Depot is one of my oldest long positions. Though not constant is size, I have had a long position in the name on a constant basis since 2014. This is not the result of getting "Amazoned," and I will not scare that easy.

I mentioned Diamondback Energy (FANG) in Monday's Recon note. Now, let's stick with the Amazon theme and discuss the other, more well-known FANG.

I have not been big on the FANG names of late. I used to play them all the time, particularly around earnings season. Amazon is the only name of the four that I have stayed in straight through. Obviously that name has been good to me. I have not played Netflix (NFLX) nearly as well, recently covering my short position when the stock hit my panic point. That's what panic points are for -- and are identified simply as a way to enforce personal discipline.

I am not a fan of Facebook (FB) or its CEO, and have never more than rented that name on either side around news events.

That leaves Alphabet (GOOGL) . I am flat this name, but have been long more often than not over the past few years. I got rid of this one when I lost faith back in March. If I was going to buy it back, however, it sure looks like I probably have missed anything close to the bottom.

Last week, Alphabet hosted it's I/O developers' conference. It's artificial intelligence technology was obviously showcased, but it was Waymo that stole the show. Particularly, it was UBS that touted Google's progress on its autonomous vehicle.

UBS estimates that Waymo could provide $114 billion in revenue to Alphabet by 2030. UBS also places an optimal long-term valuation of Waymo within Alphabet at $135 billion. This is considerably higher than valuations placed on Waymo previously by Morgan Stanley (MS) , and Jefferies.

UBS also gave positive nods in the autonomous vehicle space to Nvidia (NVDA) and Intel (INTC) on the semi-conductor side of this growing business.

Do I Get Long GOOGL Now?

I think I do, but as always, carefully. News broke last week that Amazon had halted the purchase of high revenue advertising space on Google search results. Alphabet's stock did not even skip a beat. I would have liked to have seen some scattered weakness on this news, and I spent almost the entire day Monday bidding for these shares below the market, without ever really coming that close to buying any.

I would love to get a second swing at a fat pitch below the $1,060 level. That's not likely to happen. I would surely get a little aggressive around $1,080. I will probably wet the beak just below $1,100 just to make sure that I get involved.

Get an email alert each time I write an article for Real Money. Click the "+Follow" next to my byline to this article.
TAGS: Investing | U.S. Equity | Consumer Discretionary | Industrials | Basic Materials | Markets | How-to | Newsletter | E-Commerce | Stocks