Concho Resources  (CXO) has been in a sideways trading range since August, finding buying support around $125 and selling resistance up around $145. The price action looks more like accumulation in my opinion, and it should lead eventually to new highs above $145. Some market observers might consider the $140-$145 area on CXO as resistance and they would be correct, but that is slight in comparison with the support found in the $130-$125 area. Like water, prices typically take the path of least resistance.

Chart "reading" is just part of the process, so let's not forget the information we can glean from volume and the various indicators. Let's check the daily and weekly charts.

In addition to our observations about support and resistance, above, we also see CXO is above the flat 50-day moving average line and above the rising 200-day moving average line. The pattern of volume is not clear, but the On-Balance-Volume (OBV) line has been steady this year and actually rising since late March. The Moving Average Convergence Divergence (MACD) oscillator is crossing above the zero line for an outright go-long signal.

In this weekly bar chart of CXO, above, we can see prices are right on the rising 40-week moving average line. It won't take much of a rally to close above this line. The weekly OBV line been neutral since August and has inched up a little in the past two months. The weekly MACD oscillator is crossing to a cover-shorts buy signal and is not far below the zero line for an outright go-long signal. 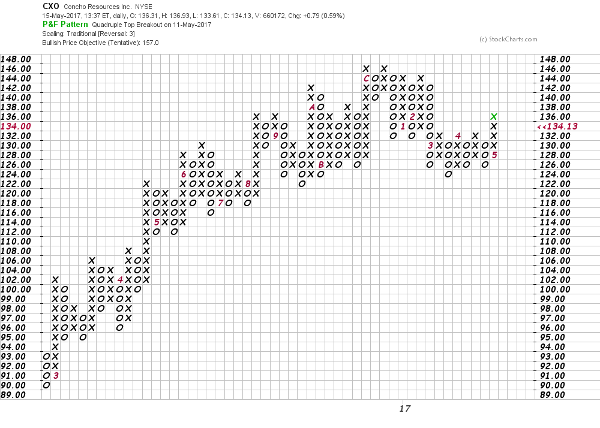 In this Point and Figure chart of CXO, above, we can see a breakout at $134. The chart also suggests that $157 is a potential price target based on the size of the recent consolidation.

Bottom line: Aggressive traders should approach CXO from the long side, risking a close below $125 for now. Add on strength above $140 and $145.