Oil is off of last week's high as I write this, but West Texas Intermediate is still trading above $70 a barrel, which is close to a three-year record.

Now, working in the financial-services industry for most of my adult life, I've always been stunned by the public's lack of awareness regarding economic conditions and trends. While out with friends from other walks of life, it can be quite disconcerting to see how those folks seem not to notice, anticipate or even care about what appears to be so obviously threatening at times.

But one thing almost everyone does notice is when retail gasoline or heating-oil prices pop. The knee-jerk reaction from the public will probably be to blame President Donald Trump's withdrawal last week from the Iran nuclear deal, but the forces that have conspired to raise crude prices are much more complex. The truth is that the the Iran announcement is merely icing on the cake, and the cake has been baking in the oven for quite a spell.

There's no doubt that geopolitical factors are what's moved crude up from the $60s to today's levels. These factors also have some analysts talking about the re-emergence of $100-a-barrel oil.

Yes, America will likely reimpose sanctions on Iran, but that will in actuality only remove something like 200,000 barrels per day from the market. What's going on in economically suffering oil giant Venezuela is perhaps a bigger story, as are the ongoing production cuts and freezes by Russia and the Organization of Petroleum Exporting Countries.

These cuts went into place in 2016, a time when global economic growth was lifting its ugly head off of the canvas and demand for crude was accelerating. The cuts seemed ineffective at first, but global oil supplies did fall by an estimated 2% over the past two years.

As for Venezuela, not only has that nation's ability to pump oil declined as the country has fallen into chaos, but two other factors have also come into play. First, ConocoPhillips (COP) has won a $2 billion legal decision tied to the Venezuelan government's seizure of its PdVSA facilities in the Caribbean in 2007. This could in theory remove more than a third of Venezuela's potential capacity to export.

Second, Caracas faces the possibility of U.S. sanctions in response to a recent election that some might not call legitimate.

Tackling the energy sector going forward will require both understanding the game that's being played and correctly anticipating the next likely steps.

Now, I've been writing for some time on what I believe to be the merits of the oil-services sector, adding Halliburton (HAL) in March in addition to my existing long of Schlumberger (SLB) . Those two longs have worked out as planned.

After all, oil demand isn't going away any time soon, particularly from China and India. Pressure to produce more oil will likely expand in areas that have the excess capacity to do so.

Saudi Arabia has implied that it will help "mitigate" any Iran-related shortages. That's nice, but the Saudis have likely targeted much higher oil prices to boost the valuation on their upcoming initial public offering on oil giant Saudi Aramco. That would clearly be in the Saudi government's best interest.

Russia could also jump in here, but that would imply that OPEC is starting to fall apart.

This leaves U.S. shale oil -- which currently fulfills two-thirds of U.S. oil demand -- as a possible short- to medium-term winner.

Now, I haven't dabbled in U.S. shale oil or in the Permian Basin since I extracted myself from Apache (APA) several months ago after an epic fight in the name of capital preservation. However, The Wall Street Journal ran a piece last week explaining that due to already-mentioned distribution bottlenecks, Permian-basin oil prices had fallen below $60 a barrel despite the fact that WTI futures were trading above $70.

Diamondback Energy (FANG) , which had rallied last Wednesday in response to a strong earnings report, sold off hard on Thursday and Friday in response to the WSJ story. As a result, Diamondback has now traded largely sideways for 2018 and currently trades at just 12 times forward earnings.

But as you can see in this chart, FANG is approaching what should be support at $120: 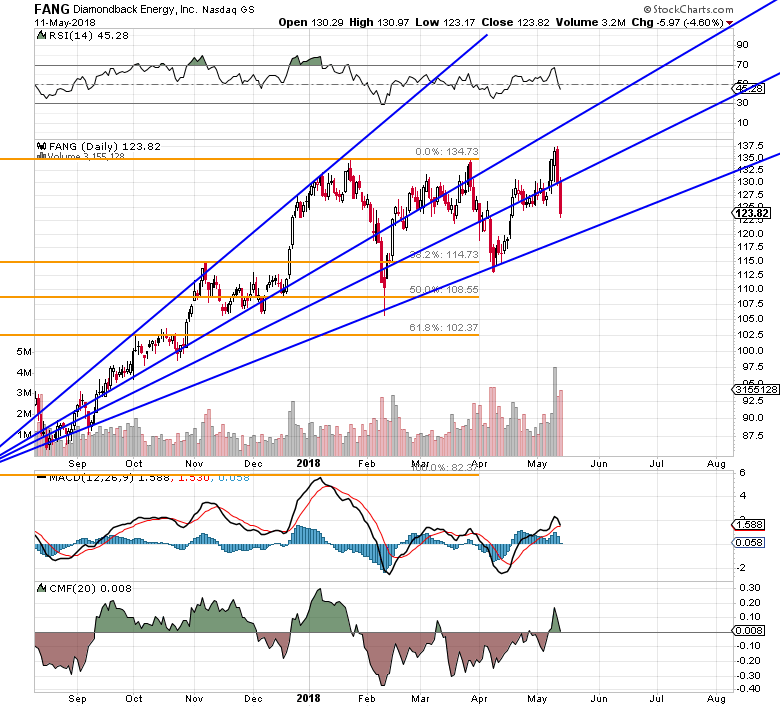 Now, it looks like you might be trying to catch a falling knife here. But I say FANG is still worth a shot if you have the money and a strong stomach.

Or how about Diamondback's subsidiary, Viper Energy (VNOM) ? Diamondback created Viper to acquire, own and exploit properties primarily in the Permian Basin and the Eagle Ford Shale formation.

Wall Street has afforded VNOM a higher valuation than its parent at 19x the stock's forward price-to-earnings ratio. But these shares came in late last week and currently trade a little above $30, making the name possibly more palatable to retail traders inclined to speculate.

Is Viper perfect? Of course not. For example, the company's levered free-cash flow is negative despite positive operating-cash flow.

However, two positives stand out to me:

Of course, the immediate question when looking at Viper's chart is: "Are we too late?" Clearly, the name suffered earlier this winter with the rest of the market, but VNOM never actually lost its uptrend: 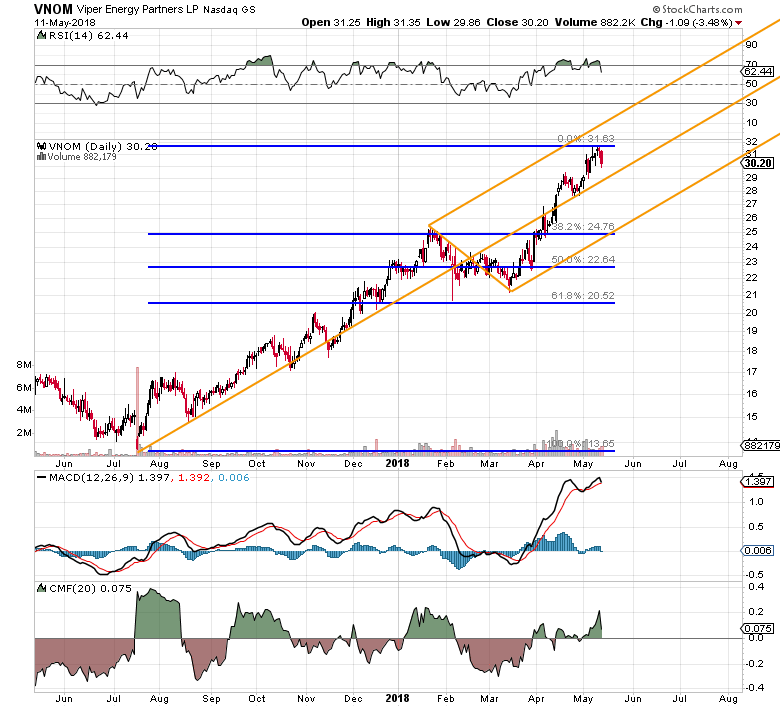 And even amid last week's market weakness, Viper outperformed its own parent. The stock's Relative Strength Index (RSI) is also solid, as is its Chaikin Money Flow (CMF). However, the daily Moving Average Convergence Divergence Oscillator (MACD) looks like it might be in a tough spot.

So, here's my preferred way of playing VNOM here:

The idea is build a position at a discount should there be weakness ahead for a name that's run higher but remains on trend. If forced to pay $29 for Viper, your net cost basis would be $28.45 for a stock that closed Friday at $30.20.

And if disaster strikes and you have to buy all of the shares committed to in both contracts, your the average equity price would come to $27. With your average revenue derived from put sales coming in at $0.425, your net basis would be $26.575 a share.

Does this sound like a worthy risk/reward scenario? You have to answer that for yourself. For me, I think this looks tempting enough to check on these premiums after the opening bell.

We know that delivery of at least some of what U.S. energy firms produce is slowing down due to a shortage in transportation capacity, which is part of the reason railroads have seen recent strength.

That's why I suggested last Wednesday morning that you buy a small stake in oil-pipeline firm Magellan Midstream Partners (MMP) at or around $68.33, with a complimentary put sale.

MMP took off later that morning, so I held my fire. But the stock closed Friday at $68.25, back in my targeted price range.

So, Monday looks like a good day to pull the trigger on this trade. But to bring in the revenue I expected on the sale of $65 puts, you might have to push out your expiration date to July. (I originally recommended June.)