(This commentary originally appeared on May 11 on Real Money Pro. Click here to learn about this dynamic market information service for active traders.)

It's been just over a month since a horrific scene played out on a United Continental (UAL) flight. Dr. David Dao was injured when he was ripped from his seat, unceremoniously dragged down the aisle and removed from his flight. United somehow found a way to make the situation even worse when CEO Oscar Munoz, in his initial statement on the incident, seemingly blamed Dao for the horrendous episode.

How is it possible that just over a month later, United is trading at a 10-year high?

Just after the incident, I pointed out that United had the best chart in its sector. United was on the verge of a breakout when the public relations nightmare occurred, which caused the stock to pull back.

The incident occurred on Apr. 9, and the controversy gathered momentum on Apr. 10. The stock dropped sharply soon after the open on Apr. 11, falling to an intraday low of $68.36 (point A on the chart, below).

After the incident, United's chart morphed into a symmetrical triangle (black lines), from which a major breakout finally occurred on May 2 (point B). 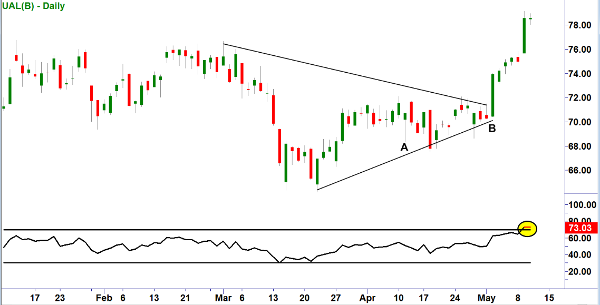 Measuring from the Apr. 11 low, the stock has now gained 15% in one month. The twists and turns in the United saga highlight the importance for investors to remain objective during emotionally charged situations.

Thanks to that rally, United is now overbought, according to its RSI (relative strength index) indicator (shaded yellow). Short-term traders, who bought United after the incident seeking a quick trade, now have a reason to sell, so don't be surprised if the stock hits some turbulence.

In the wake of last month's incident, some were calling for a boycott of United, but that is easier said than done. Many corporate business travelers don't book their own flights. Often, those flights are booked through third-party agencies, which are instructed to book the least expensive flights.

Often, there is only one airline that offers a low price or a direct flight to a particular destination. In some cases, that airline will be United. I can't imagine that many travelers will choose to overpay, or volunteer to suffer through a five-hour layover, rather than fly United.