When a firm's top brass regularly receives employee stock options they aren't prone to buy shares on the open market. It had been almost eight years since the last insider buys in the shares of CVS Health (CVS) .

That changed last week when Chairman David Dorman and Director C. David Brown II ponied up about $2.1 million to pick up CVS shares. At around $62, the stock was simply too cheap to pass up. 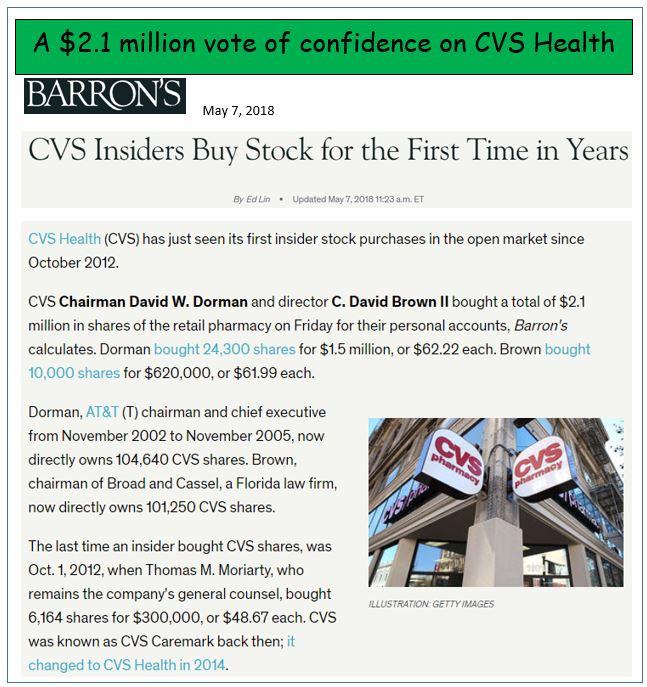 Both CVS and industry rival Walgreens Boots Alliance (WBA) had been pummeled in recent months despite posting fine results. They were initially weighed down by Amazon's (AMZN) now abandoned desire to enter the drug distribution space.

Now, CVS appears to be suffering about the uncertainty related to its pending merger with Aetna (AET) . If that deal closes, profits at CVS will be diluted over the coming two or three years. Management has also indicated that dividends would likely be frozen at the current level until merger-related debt is paid down.

Based on CVS' very low P/E and well above normal yield those concerns appear to be more than reflected in the present price.

The most recent decade saw across the board improvement in pretty much every measurable category. Today's very depressed quote fails to account for anywhere close to the past ten years' value creation.

Situations like that are almost always resolved when the stock "catches up" to the improvement in fundamentals.

From 2010 through 2017 CVS typically fetched just shy of 15x current EPS. A normal yield was around 1.57%. Based on its current, stand alone, status CVS is now available for just 9.1x the consensus earnings estimate for 2018, accompanied by a 3.19% yield.

This stock hasn't been that cheap since the dark days of 2009. Assume CVS takes a valuation haircut from the AET deal. Even a partial rebound to just 12x this year's profit projection supports a 12-month target price north of $82.

That goal is not farfetched. Note that CVS traded above $83 during each of the past five calendar years, including 2018 YTD.

No wonder the CEO and director became enthusiastic buyers. 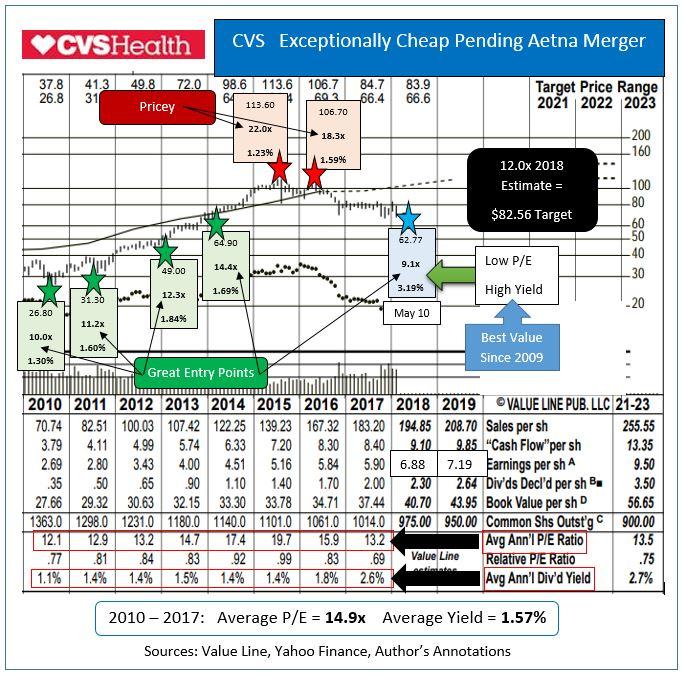 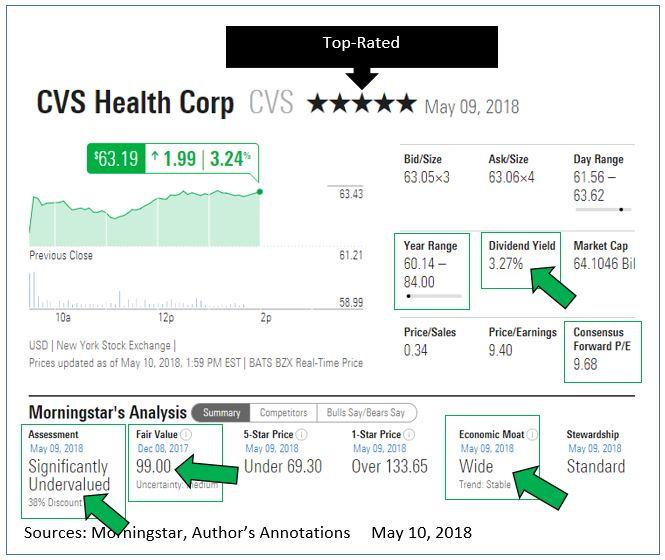 The break-even point on either of these put sales would be cheaper than what enticed the company's CEO or director to add to their stakes.

Buy some CVS shares, sell some LEAP puts out to Jan. 17, 2020, or consider doing both. Those actions should be just what the doctor ordered in making your portfolios healthier.

(This commentary originally appeared on Real Money Pro on May 11. Click here to learn about this dynamic market information service for active traders and to receive daily columns like this from Paul Price, Bret Jensen and others.)

Get an email alert each time I write an article for Real Money. Click the "+Follow" next to my byline to this article.
TAGS: Investing | U.S. Equity | Healthcare | Consumer Discretionary | Stocks | How-to | Options