One news story that hit the tape on Thursday left me thinking about how it would eventually play out all day. In fact, I woke up this morning (you would probably call it last night) at zero dark thirty still thinking about it. I am sure that you noticed the plans of two members of the Dow Jones Industrial Average, Apple (AAPL) and Goldman Sachs (GS) teaming up to launch a new credit card. Does this work? I trade both of these names. I am keenly interested.

On Monday, the Federal Reserve released their March data for Consumer Credit. The headline print showed broad credit growth of $11.6B, which was well below expectations, largely due to a reduction in the use of revolving credit. In February, revolving credit (credit card usage) also declined. Two months does not make a trend. How about 10 or 11 years though? That's how long the US consumer was in a bad place, and might be climbing out of. Notice the slowdown in consumer spending over the first quarter? Even with the domestic economy visibly outperforming anything we had seen as a nation is a very, very long time?

Most economists look upon the expansion of revolving credit as a measure of consumer confidence. I do not see it quite that way. For so long, our pals... Mr. and Ms. America suffered, and they spent. They spent on their credit cards, and overextended themselves just to keep their families at a certain standard of living. If they truly are feeling better about their economic condition, they maybe, just maybe they have to take care of personal and household balance sheets as they come out of that cold desolate place of suffering.

If the economy, and labor markets remain healthy, the consumer will get hot again, but never like before. Too much water under the bridge. An entire generation has now grown up adverse to spending. They saw what their parents went through. This younger generation is often referred to collectively as a bunch of snowflakes, because they grew up less exposed to the consequences of personal failure. The truth is that they also grew up far less exposed to the benefits of opportunity than we did, and therefore are less likely to take on risk. Their behaviors will not be altered all that easily.

So it is that Apple swaps out Barclays (BCS) for Goldman. Goldman pushes into consumer banking as trading revenues disappointed even with a volatile start to 2018. Is Goldman a consumer banker? Was Willie Mays ever really a Met? Hank Aaron a Brewer, or Michael Jordan a Wizard? Of course, Goldman is a lot closer to the firm's glorious prime than were any of those three when they changed their stripes. Still, they tread where they as a firm are not expert. They now try to invade territory dominated by JP Morgan Chase (JPM) , and Citigroup (C) , both names that consumer know well, and can physically locate in their neighborhoods easily. Will the average American be comfortable with Goldman Sachs? Will they care? I have learned throughout my career to never underestimate Goldman Sachs. Carlton Fisk turned out to be a pretty good White Sox, but Goldman will have to show me.

For Apple, this could make sense if it does enhance Apple Pay revenue streams. The Apple thesis going forward is one based on the success of expanding such revolving credit. Apple services, as provided for by the entire Apple ecosystem will be very reliant upon subscription. As this becomes the focus, one might expect Apple to extract higher fees from Goldman than they were receiving from Barclay's. This will be paramount as the firm redefines itself in this way. 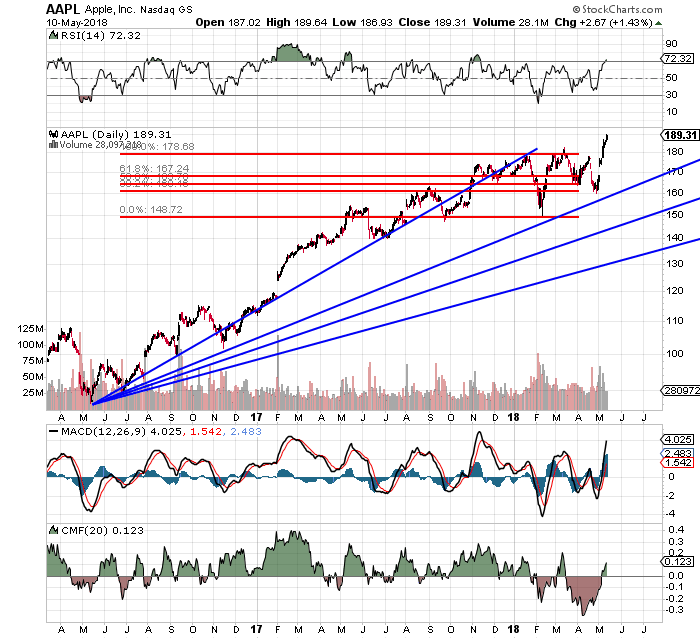 Apple has obviously broken out.

It's clear as a bell that the name broke out at 178, My price target was 176 and that is where I took my profits on the equity side. I did make some money on a bull call spread, but the shares have moved well beyond what that trade offered, and I stand before you flat the name. What now?

Apple is just as clearly overbought, technically. The new level to the downside would be 178. The price target to the upside becomes 197 as that is where market cap will hit $1T. Like a moth to the flame, I believe there will be a gravitational pull toward that level. Yet, the daily MACD, and Relative Strength both appear to be severely overextended. My thought is to re-initiate on any short to medium term weakness that should arise, but I do not want to get too cute. This name is hot, and fundamentally undervalued. I want to buy AAPL at a discount, and if I get one, I want to make money on the shake out first.

Max Loss: Should the shares zoom right to 197 without taking a rest, both puts will expire worthless. The net debit would be the maximum loss on the trade.

If all of this worked, I would then look to add equity in the 176/178 area, but a lot has to go right for that to happen. As for GS, I reloaded in early May taking the position close to what I consider full, and already have a nice profit there. I will likely take off a good 40% of the position today if the financials remains strong. No emotions gang. Execution.

Nvidia (NVDA) reported Q1 2019 results last night. Whoa. These guys are playing for keeps. The firm obliterated expectations for both Earnings per Share and Revenue. In fact, revenue printed up 65.5% year over year. The firm's CEO Jensen Huang said, "We had a strong quarter with growth across every platform." Huang is not just blowing smoke. Take a look at some of these metrics, gang.

Gaming roared to a 68% increase. Professional Visualization (think AI, and VR) grew 22%. The Data-center? Oh just a 71% pop there. Even crypto-currency demand which had been downplayed was strong, in fact it was very strong. OEM and IP revenue grew by an astounding 148%. Crypto is not yet the reason why one would invest in this name, but is certainly part of the story, and can no longer be ignored.

Even the automotive segment showed some growth in revenue (+4%) despite the firm's intentional slowing down of it's own progress in that space. Did you see gross margins? Non-GAAP gross margins improved both on a yearly and sequential basis to an eye-popping 64.7%. On top of all of these goodies, Nvidia expects to return $1.25B to shareholders for the full 2019 fiscal year through dividends and share repurchases. There is literally nothing to dislike about these results except for the fact that the market may have largely priced them in ahead of the numbers.

I took a profit on 27% of my long position ahead of the close this past Wednesday at 256 and change. Given the way that the stock had behaved, I really felt that I needed to protect myself. Besides, my price target was 255, and you do have to respect your own homework. Yes, I told you that I was going to take off 30%. Such is the nature of doing math in your head. What now though? These guys are clobbering it, and I feel they are still clobbering the competition as well with the possible exception of Intel (INTC) . 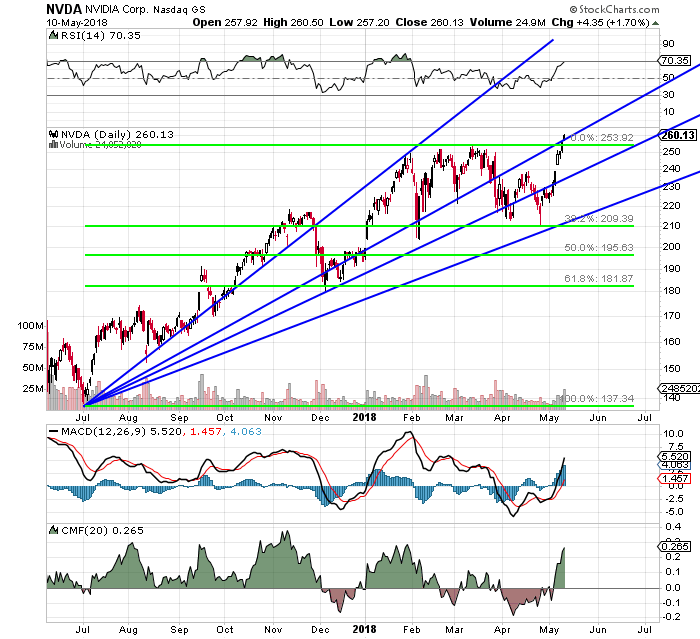 As you can see, even though the name spiked on Thursday, that the 254 level (which is key) is still in play. Should the shares recover from what has really been a mild overnight bout of profit taking, an honest breakout may have occurred. That said, should the shares open below 254, that spot will have to be retaken, and that will likely be a fight.

How I see it is this. In the event of a more significant risk-off move, the shares should see significant support at 240 today that rises to 245 by the end of the month. Anywhere close to that fan line, I am likely to buy back the shares that I sold on Wednesday.

(AAPL, GS, JPM, C, NVDA are part of Action Alerts PLUS, which Jim Cramer co-manages as a charitable trust.)

Get an email alert each time I write an article for Real Money. Click the "+Follow" next to my byline to this article.
TAGS: Investing | U.S. Equity | Financial Services | Technology | Stocks