Wendy's (WEN) soared to new highs with its move up yesterday. The rally still looks "fresh" and can power to higher highs in the weeks ahead -- after all WEN made a five-year base pattern from 2009 to 2014.

Typically, large base patterns can support large rallies. WEN based out around $5 and stocks often rally multiples of a level where there is strong accumulation. WEN is likely to rally to the $20 area in the weeks ahead.

In this daily bar chart going back 12 months, below, we can see that WEN had a lengthy consolidation around $10 or a double from the $5 base we noted above. The stock started a new leg to the upside in September when it strengthened to $10.50 and stayed above the rising 50-day moving average line and the flat 200-day moving average line.

The volume pattern shows a number of days in June and August where trading was heavier than normal. This pattern is constructive but it failed to translate into a rising On-Balance-Volume (OBV) line until November. The OBV line made a move to new highs starting in April, which has helped to confirm the price advance that is a triple from the base. The Moving Average Convergence Divergence (MACD) oscillator is firmly above the zero line in a strong go long signal.

In the weekly chart of WEN, below, we can see that prices are strongly above the rising 40-week moving average line. Notice the large consolidation pattern from 2015 between $8.50 and $11.50? When WEN reached $14.50 it achieved its upside price target from this pattern ($3 is the height of the pattern added to the breakout at $11.50 gives you $14.50).

The weekly OBV line has been positive since early 2016 and should soon make a new high for the move up. A rising OBV line tells us that buyers of WEN have been more aggressive. The weekly MACD oscillator just turned upward to a fresh outright go long signal.

In this Point and Figure chart of WEN, below, we can see the base pattern from 2009 to 2014 and the more recent consolidation. There is an important breakout at $11.50 and a price target of $20.25. This price target would be a 4x move from the original base. 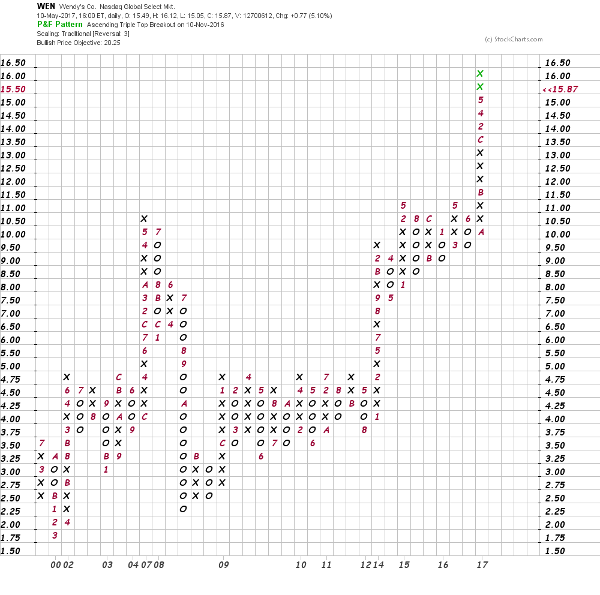 Bottom line: WEN has rallied quickly from $13.50 to $16 so some sideways price action would not be a surprise. Aggressive traders looking to buy more WEN or start a long position should use this period of sideways price action to go long and risk a close below $14.50. The $20-$21 area is our price target.

Get an email alert each time I write an article for Real Money. Click the "+Follow" next to my byline to this article.
TAGS: Investing | U.S. Equity | Consumer Discretionary | Consumer Staples | Consumer