Momentum is building as the bulls with idle cash on the sidelines are panicking that they may have missed an opportunity to put it to work at lower prices. The breakout over the trend line yesterday that you can see in this chart, below, was a major technical development. 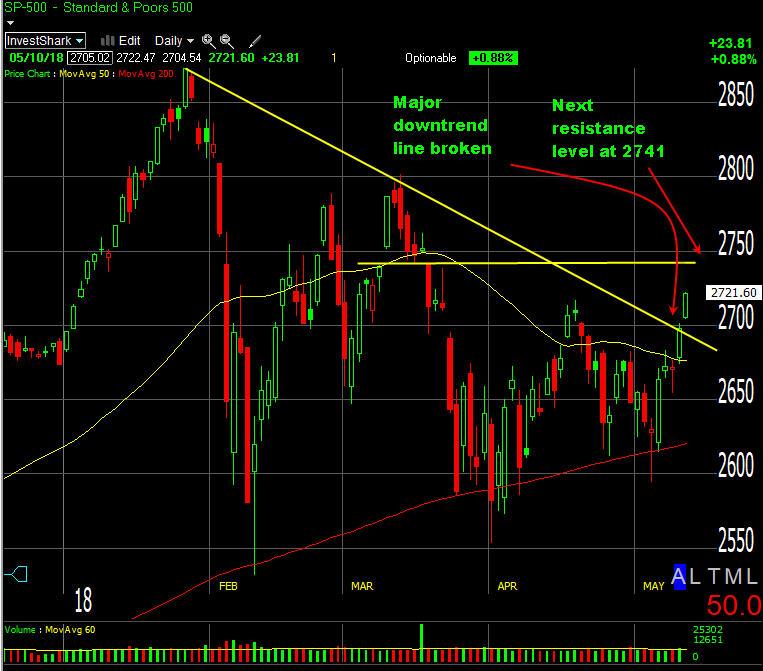 The bears were hoping to fade this move but when the tame CPI report gave the bulls additional ammunition, now they are on a rampage and squeezing shorts. This is the sort of action that is aided by buy programs that accelerate the squeeze and cause anxiety among bulls that are not fully invested.

Now that the S&P 500 has taken out the April highs there isn't much overhead resistance on the chart until the gap at the 2741 level and then the March highs.

This is looking like one of those V-shaped moves right now which is a mixed blessing. They are great for positions you are already holding but make it quite difficult to find entry points. The buy-and-hold crowd loves this action but for position traders it is a challenge to find a way to put money to work without chasing things that are now extended.

Many market players felt that the character of the market has shifted recently and that this sort of action was unlikely but this is exactly the sort of action that often happens in technically poor markets because it catches so many people by surprise and they have to scramble to reposition.

The bears are going to be quick to point out that there isn't any major positive catalyst that is supporting this straight up move but price action is what matters and it is relentless to the upside now.

Get an email alert each time I write an article for Real Money. Click the "+Follow" next to my byline to this article.
TAGS: Investing | U.S. Equity | Markets | Economy | Stocks