It was the best of times, it was the worst of times. The season of light, the season of darkness. The spring of hope. The winter of despair. The catalyst? The surging price of crude. The result has been a Dow Jones Transportation Index that really tells investors nothing useful at all without first being dissected into different business lines.

The Dow Transports scored a 0.6% gain on Wednesday. That information merely provided a mid-point for the broader group. With WTI Crude blasting off to levels well above $71.50 a barrel in the darkness of early Thursday morn, one can only wonder how much harm this does to the airlines that now see business expenses rising above expectations going forward, or how good conditions might get for railroads that get paid to move expensive cargo, especially now with supplies seemingly balanced, sanctions being placed on Iran apparently imminent, and mentions of pipeline bottlenecks making headlines.

With delivery services packed tightly into the middle of yesterday's pack, the transports that easily led the index higher were almost exclusively limited to the rails. Norfolk Southern (NSC) , ran 3.3% on Wednesday alone, while CSX Corp. (CSX) , Union Pacific (UNP) , and Kansas City Southern (KSU) also scored gains somewhere between 1.5% and 2.8% themselves. In fact, the only non-rail to squeeze its way into a leadership position was Kirby Corp. (KEX) , a firm that operates barges working the Mississippi River and the Gulf Intra-coastal Waterway. Kirby benefits from the same demands that benefit the already mentioned railroads.

The following chart just fascinates the heck out of me. Hopefully, you are as nerdy as I am, and can get as much perverse joy as I can out of studying such diversion. For this chart, we'll use the S&P 500 as the base, meaning that this broad measure of equity market performance remains constant at zero. That also means that performance for the other indices measured here are not in nominal terms, but in "real terms" versus the S&P 500 itself. 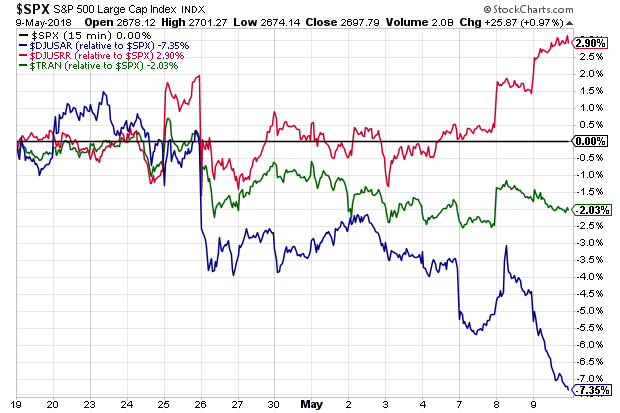 This chart captures only the last 15 trading days. The market price for one barrel of WTI Crude has climbed about 3.3% over this time period, depending on what time of day you decided to take oil's temperature. As you can see, The Dow Jones Transportation Index (green line) has underperformed the S&P 500 by 2% over the last 15 sessions, telling us nothing at all. That's because the Dow Jones US Airline Index (blue line) has run 7.35% below the S&P 500, while the Dow Jones US Railroad Index (red line) has outperformed the broad market index by nearly 3%. Yowza.

Thinking Out Loud on Transports

What young lad doesn't love fire trucks, bulldozers, military hardware, and yes, trains? We all do. We can't help it. Who minds getting stuck at a railroad crossing? Not this guy. For that reason, I have almost always had some exposure to the rails. I still do, and have been carrying CSX on my book since the summer 2017 melt-down. The restructuring plans that had begun under the leadership of the late CEO Hunter Harrison have stayed on course, as has the buyback program. As for the rest of the group, I foolishly covered the area with the SPDR Transportation ETF (XTN) . That has been a drag on performance, but still far better than direct ownership in the airline space.

It might be a little late to chase the rails. Though there are reasons for crude prices to remain elevated for a bit, it would not seem ridiculous if this recent pop gave some back in the short-term.

If one feels compelled to be in the airlines, I have no position, but I am watching SkyWest, Inc. (SKYW) . That regional airline operator is outperforming its peers of late. The company appears to be able to pay its bills. SkyWest's income is rising faster than its overall revenue thanks to improved margins. This is one for your mental bullpen.

Is anyone out there still wondering just what the heck, or who the heck is Roku? Oh, I know them, they compete with Netflix (NFLX) , right? Well, yes and no. What Roku does is connect the user to streaming content through the internet. The platform allows the customers to personalize their content, while enabling publishers to build and monetize their audiences.

In fact, Netflix (BTW, I covered that short at a loss Wednesday. Discipline: rule number three) and Hulu are both available via Roku, as are CBS News, ABC News, Crackle, the CW network, and Vice. Oh, you can also gain access to Amazon (AMZN) video, Google Play, and Vudu. This is starting to get interesting, isn't it?

Why, Yes It Is

ROKU shares are up a whopping 4.2% here in the overnight session after releasing first-quarter numbers that showed a loss of $0.07 per share (an $0.08 beat) on revenue that increased to $136.6 million, a 36.5% year-over-year rise. The fact is that there is something to get excited about here.

Now, can you Roku? Oh, did I mention that you can get Walt Disney Co.'s (DIS) ESPN+ app on Roku? I didn't? Well, you can, and that's probably good for the both of them.

Pay TV has been in decline for years now. The numbers have seemed to get worse every year since roughly 2011. That said, according to Nielsen COO Steve Hasker, some 89.5% of subscription video-on-demand viewers still primarily prefer to do their viewing on traditional television screens, and not on mobile devices. If that's true, then over-the-top (OTT) hardware providers would be the obvious evolution of what was once the cable bundle. The competition for Roku is plain as day. Apple (AAPL) TV comes to mind immediately, as does Amazon Fire.

The question becomes, can Roku compete against the big guys? The kind of growth we are now seeing means that the firm will not be ignored. At some point, I would not be surprised to see a takeover premium start to build into the stock. I am flat ROKU, and have not heard that anywhere. Just a man thinking out loud again. Margins might not be there yet, but growth certainly is, and cash flows are positive.

Get an email alert each time I write an article for Real Money. Click the "+Follow" next to my byline to this article.
TAGS: Investing | U.S. Equity | Transportation | Technology | Earnings | Markets | Newsletter | Stocks