We last posted here in February on the topic of euphoria, or at the very least excessive complacency. The S&P 500 was about 2330 and the Dow about 20,500 at the time. Both indices are about 2.5% higher today, and the headlines du jour concern the record-low readings we are seeing in the VIX -- the "fear index," which measures market expectations for volatility on a forward-looking 30-day basis. The VIX is something that gets mentioned a lot at extremes, both low and high.

It is common for the VIX to rise above 20 when the market is in the midst of a typical correction. A reading of 30 or higher implies a great deal of uncertainty, and therefore rising option premiums on the S&P 500. Once you get into the 40+ range, it's safe to assume we are closing in on the bottom of a massive correction. For some context, we got into the 80s in October 2008 and the VIX remained above 40 until April 2009. We all remember what was happening then....

Below is a chart of the VIX going back three years: 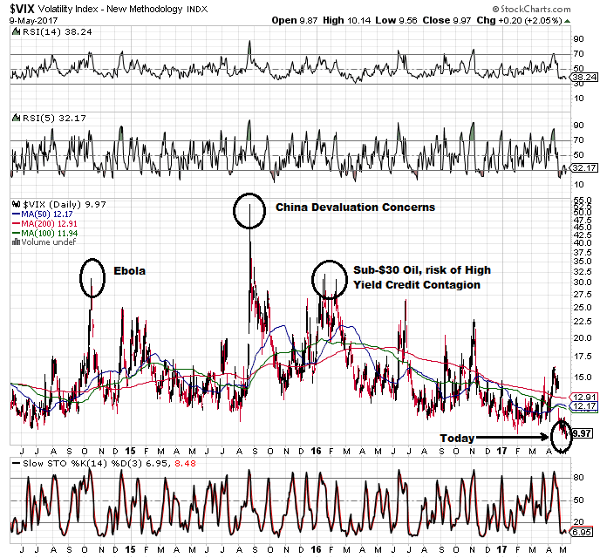 We have sunk below 10 on the VIX. A single-digit reading is very rare. And many market pundits are pointing to data sets that show a high VIX is a much more reliable indicator -- meaning a high VIX reading can reliably provide for good (low) entry points for buying stocks, but a low VIX reading does not necessarily mean a market drop is around the corner.

One thing a low VIX almost certainly doesn't mean, however, is that large gains should be expected for the broad indexes. In fact, we've had a sub-10 reading on the VIX on nine separate occasions since 1990. Every single one was followed by negative returns for the S&P 500 over the subsequent 12 months. You can read more about that here.

Many are speculating as to the reason for the persistently low level of volatility, especially given the current geopolitical risks in plain sight, the Federal Reserve's newfound comfort level with raising short-term interest rates, and continued uncertainty about everything eurozone. Explanations range from the increased popularity of "passive investing" via index funds and ETFs; the ability for hedge funds to get stock market exposure by shorting volatility -- via the VIX itself or other VIX-related products -- since the two tend to move opposite of one another; and I've even heard some people argue that there are simply no headwinds to the market now and that we are in the early innings of an expansion.

What I know is that the small-caps, financials and transports are all considered leading indicators for the broader markets. And they are all signaling trouble. 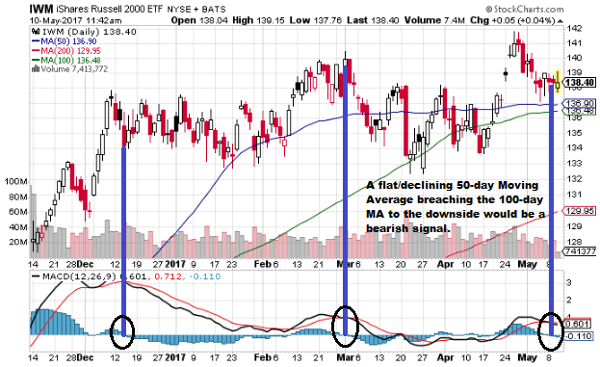 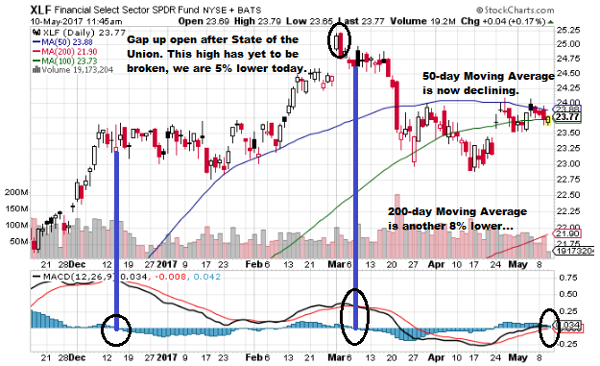 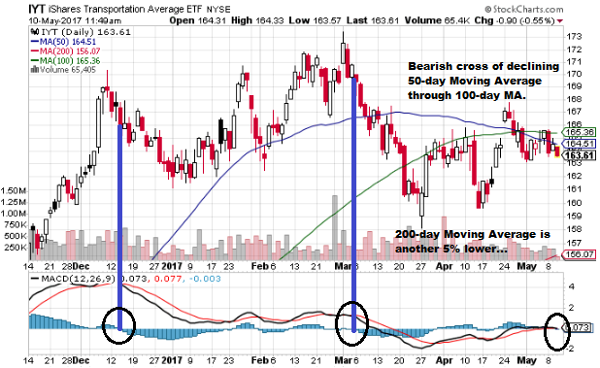 Financials were a big post-election story, enjoying a tremendous rally on hopes of higher interest rates --either because of increased growth expectations, or the fact that President Trump has been an outspoken critic of Fed Chair Janet Yellen, or both -- and also the hopes of deregulation. However, what we've seen instead is a flattening yield curve (the differential between short-term and long-term interest rates). It is this margin that drives a great deal of banks' profits, as they borrow on the short end and lend on the long end. Not only is the picture a bit murky for net interest margins (NIMs), but loan growth is also slowing, as shown below: 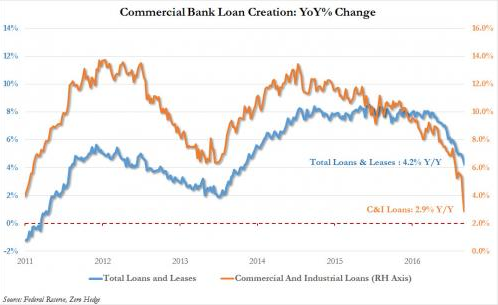 So, yes, you'll see data demonstrating that the number of loans being issued is at a record high -- which is true -- but the rate at which they are increasing on a year-over-year basis is heading toward zero. The first derivative is always more useful.

Another post-election narrative that has not played out has been in the energy patch. It's well known that Trump is pro-energy and has promised a push toward oil and gas development in an effort to move us toward energy independence. Unfortunately, he cannot control the price of oil. After an initial pop, energy stocks have given up all of their gains since Nov. 8 -- in fact, the only subsector of the energy space that is in positive territory since the election is infrastructure (the MLPs). 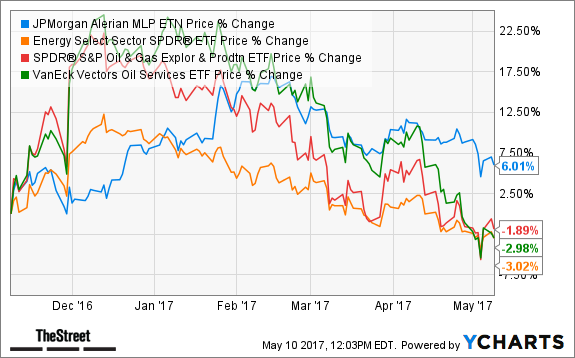 Not everything is as it seems. We are increasingly cautious on U.S. stocks and maintain that patience in deploying fresh capital will likely be rewarded.

Get an email alert each time I write an article for Real Money. Click the "+Follow" next to my byline to this article.
TAGS: Financial Services | Investing | Markets | Stocks