"Few men of action have been able to make a graceful exit at the appropriate time."

President Donald Trump pulled the United States out of the Iran nuclear deal Tuesday, as expected at 2 p.m. Actually, that deal expires this Saturday. The plan is apparently to move toward the re-imposition of sanctions on the western Asian nation. The problem, from the president's perspective, was that the deal as structured does not prevent Iran from making progress toward the enrichment of uranium, and the eventual acquisition of nuclear arms. Some larger U.S. multi-nationals do have something at stake.

Some see this move as necessary, others are critical. Opponents of exiting this deal see the potential for destabilization. Corporate America has something to lose. Boeing (BA) could lose order flow that was already in place. Orders from Iran for 110 commercial aircraft had been placed with the Chicago-based aerospace firm. At list prices, those aircraft (80 737s, and 30 777s) would come to roughly $20 billion worth of revenue.

I know this sounds like a lot, given that a brief look at Boeing's revenue history shows quarterly revenue that regularly prints at levels between $20 billion and $25 billion per quarter. The truth is that Boeing ended the last quarter with a production backlog of more than 5,800 aircraft that includes more than 4,600 737s. In other words, nobody likes to lose business, but this does not really slow this company down all that much. The obvious sectors to monitor for the short to medium term will be in both the energy and defense areas.

The president has accused Iran of lying when it comes to the development of the nation's nuclear capabilities. U.S. intent is to impose "the highest level of economic sanctions" on Iran. There will be a three-to six-month wind-down period. Iranian president Hassan Rouhani expects to meet with the other signatories to the deal over the next few weeks or so, and has threatened to resume the enrichment of uranium at the industrial level.

While the obvious move higher for crude prices late on Tuesday took the energy sector with it, defense and aerospace type names certainly saw benefit from that kind of talk.

The defense industry saw increased benefit as well from the Goldman Sachs' (GS) upgrade of Northrop Grumman (NOC) to "conviction buy" from "buy" early on Tuesday. Followers know that I have been supportive of this industry, given the growing defense budgets that we see around the planet, not just here in the U.S.

The industry, thanks to the nature of modern passive investment had taken a beating since the conciliatory stand taken by both the U.S. and North Korea in recent weeks. I remain long NOC, Raytheon (RTN) , General Dynamics (GD) , and Lockheed Martin (LMT) , and followers know that of the four, I have been adding to both RTN and NOC on weakness.

The fact is from my point of view, that there will always be trouble somewhere. Missiles, missile intercept, drones, and drone swarm technology are where defense money will continue to flow.

Treasury Secretary Steven Mnuchin indicates that the U.S. is talking to domestic oil producers about how to increase supplies in order to maintain balance as preparation for the re-imposition of sanctions on Iran. According to the Financial Times, Paul Sheldon of S&P Global Platts suggests that unilateral enforcement of new sanctions will be more difficult now than what was in place prior to President Obama's deal in 2015. That deal obviously had broader international support than does its exit. Sheldon adds that there could be just 200 thousand barrels per day (of Iranian exports) at risk by the fourth quarter of 2018. On top of that, Saudi Arabia has spare capacity, and has pledged to support the stability of these markets.

Crude prices recovered sharply from the profit-taking that we saw ahead of yesterday's news events, and it is in the Saudis' best interest to maintain higher market prices as long as the Saudi Aramco deal remains in the future. That said, the U.S. dollar continues to strengthen versus the greenback's peers, and that could act as a weight upon all commodity prices if that condition were to persist.

You've heard all about the bottlenecks in domestic distribution. Now, you've heard Secretary Mnuchin talk about production. Still, we have to get this stuff to market. When it comes to energy, I have focused on oil services, hence my well-known long positions in both Schlumberger (SLB) , and Halliburton (HAL) .

I have kept my toes in the water as far as production and exploration are concerned by maintaining a long in the blue-chip, under-performer, Exxon Mobil (XOM) .

However, I do not have a pipeline stock on my book. Generally, the group's debt levels, as I am one that still considers fundamental analysis, have kept me at bay.

Magellan Midstream is no different in that regard. Total debt just dwarfs cash on hand. That said, the firm's total assets dwarf the firm's total debt. Total assets are not generally very liquid ho,wever, and both the MLP's current and quick ratios are like something out of a horror movie. Buuuut... that said, there are positives. MMP trades at just 15 times forward-looking earnings estimates, and runs with some nice margins. Gross profit margin is lofty, at over 50%, while operating margins are still above 36%.

A sure thing? Of course not. One thing I promise you, a free lunch will likely remain elusive until the day you draw your last breath. Still, MMP does display some nice cash flows, while paying shareholders a 5.5% dividend yield to take on equity risk. Oh, and MMP beat first-quarter expectations for both earnings per share and revenues nicely. 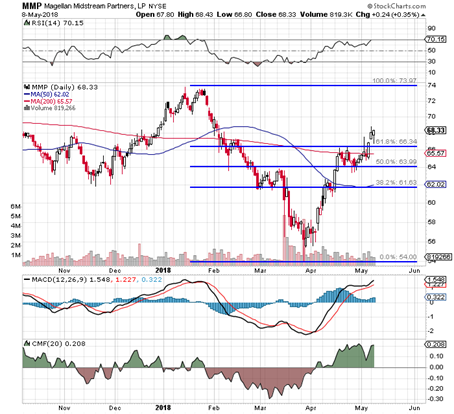 What's easy to see in the chart above is the breakout above former resistance at the $66.25 level. This came both in response to earnings and the double dose of news that volumes on MMP's Bridge Tex pipeline had gapped 50% higher in the first quarter while nearly all of the firm's clients on the Longhorn pipeline had extended their contracts for an additional two years.

Money flow popped, as did Relative Strength. I am a little late to this party. I would rather wait for a re-test of the $66.25 levels from above, but I am not sure we get one in this environment. That said, this is what I am going to do:

Buy small at current price levels with the intent to buy another small increment at expected support. On top of that, write puts with a medium dated expiration and a strike price that will place my basis, if exercised, against me down where I want it.

Potential Risk: Having to buy the additional shares at a net $64.30 by mid-June if the puts are exercised. (For the news kids... one options contract equals 100 shares of equity.)

Goldman Sachs, Raytheon and Schlumberger are holdings in Jim Cramer's Action Alerts PLUS Charitable Trust Portfolio. Want to be alerted before Cramer buys or sells these stocks? Learn more now.

Get an email alert each time I write an article for Real Money. Click the "+Follow" next to my byline to this article.
TAGS: Investing | U.S. Equity | Transportation | Energy | Industrials | How-to | Newsletter | Politics | Stocks