The Walt Disney Co. (DIS) was reviewed back on March 28th and I wrote that, "If DIS declined to its $91 price target it will have broken the September/October lows and open the way for a possible test of the 2016 lows around $90." DIS in the past five weeks has been testing and holding the $98 level but the bears have not given up the ghost.

With all the high-level negotiations for Twenty-First Century Fox's (FOXA) assets, another look at the charts seems like a good idea.

(For more on Disney, see Jim Cramer's: Disney, Walmart Stock Gets Whacked for Investing in the Future)

In this daily bar chart of DIS, below, we can see that prices recently rallied above the still declining 50-day moving average line. DIS is still below the declining 200-day line but a rally and close above $103.50 should break the line.

The daily On-Balance-Volume (OBV) line has been in a decline from early March to early May and suggests that sellers of DIS have been more aggressive. It is too soon to tell but the OBV line may have stopped declining in early May.

In the lower panel is the trend-following Moving Average Convergence Divergence (MACD) oscillator which generated a cover shorts buy signal in early April and is close to crossing above the zero line for an outright go long signal.

In this weekly bar chart of DIS, below, we can see a mixed picture for our favorite indicators. Prices are below the declining 40-week moving average line.

The weekly OBV line has been declining since January but looks like it may have broken that decline in April.

The weekly MACD oscillator has narrowed in recent weeks and could eventually cross to the upside for a cover shorts buy signal.

In this Point and Figure chart of DIS, below, we still have prices in a downtrend with a possible or potential target of $91.25. A rally to $103.41 would probably improve this chart. 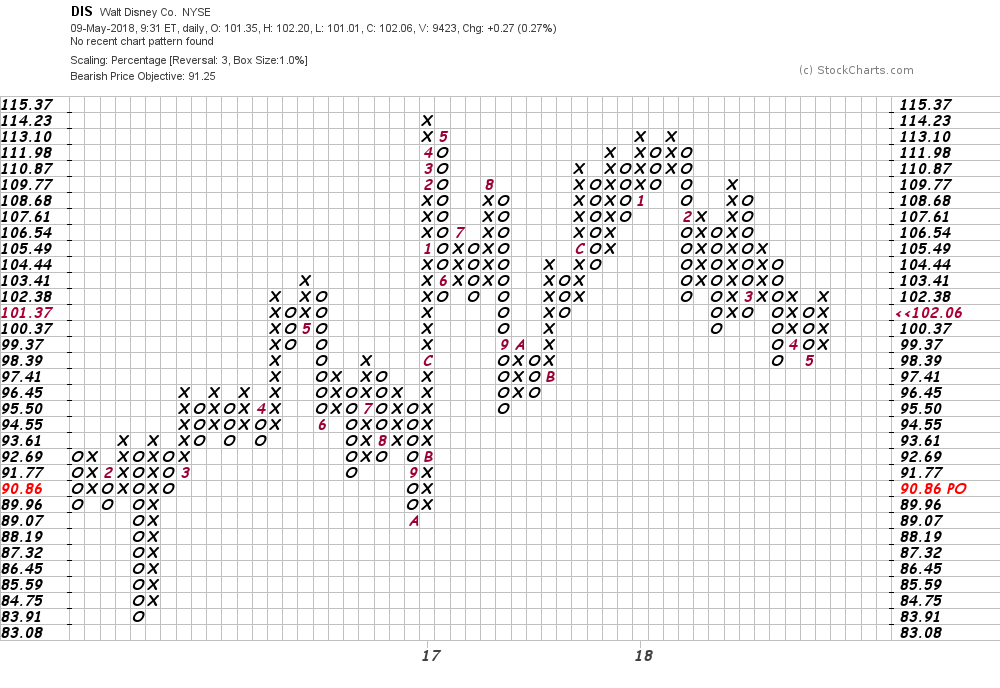 Bottom line: With more of our indicators in the bear camp I remain cautious on the long side of DIS. It may take a rally to $107 or even $108 on increased volume to convince me that the upside of DIS has promise.

Get an email alert each time I write an article for Real Money. Click the "+Follow" next to my byline to this article.
TAGS: Investing | U.S. Equity | Entertainment | Gaming | Stocks

Lucid Group Shares Appear in a Race to a Bottom

But it might not be 'the' bottom; let's kick the tires (and charts) of this electric vehicle stock.