Comcast (CMCSA) was last reviewed back in December, when I wrote, "the bearish weekly OBV line and a downside price target from the Point and Figure chart tells me to be cautious on CMCSA. A close above $42 would be bullish, while weakness back below $37 would be a negative." As things turned out CMCSA rallied further in December and January ultimately touching $44 but then declining and breaking below $37. The upshot is we would have been positive for a couple weeks before the decline got underway. With prices around $31 now, a fresh review of our charts and indicators seems like a good idea.

In this daily bar chart of CMCSA, below, we can see that prices are and have been below the declining 50-day moving average line since February. The slower-to-react 200-day average line has been declining since early March. The daily On-Balance-Volume (OBV) line peaked in February with prices and has trended lower signaling more aggressive selling. In the lower panel is the 12-day momentum indicator which compares today's price to the price 12-days ago. Price momentum has been improving slightly as prices have declined the past three months. While this is a bullish divergence it is not a particularly strong divergence.

In this weekly bar chart of CMCSA, below, we can see that prices are well below the declining 40-week moving average line. The $30 area is older support from 2016 and it may or may not act as support. The farther you go back in history the less reliable a support or resistance zone will be. Over time traders and investors can shift their positions and opinions. The weekly OBV line has been weak this year and suggests a fair amount of liquidation. The 12-week momentum study does not show a bullish divergence but should be watched to see if momentum slows from here.

In this Point and Figure chart of CMCSA, below, we can see the downtrend and a possible bearish price target or objective of $27.48. 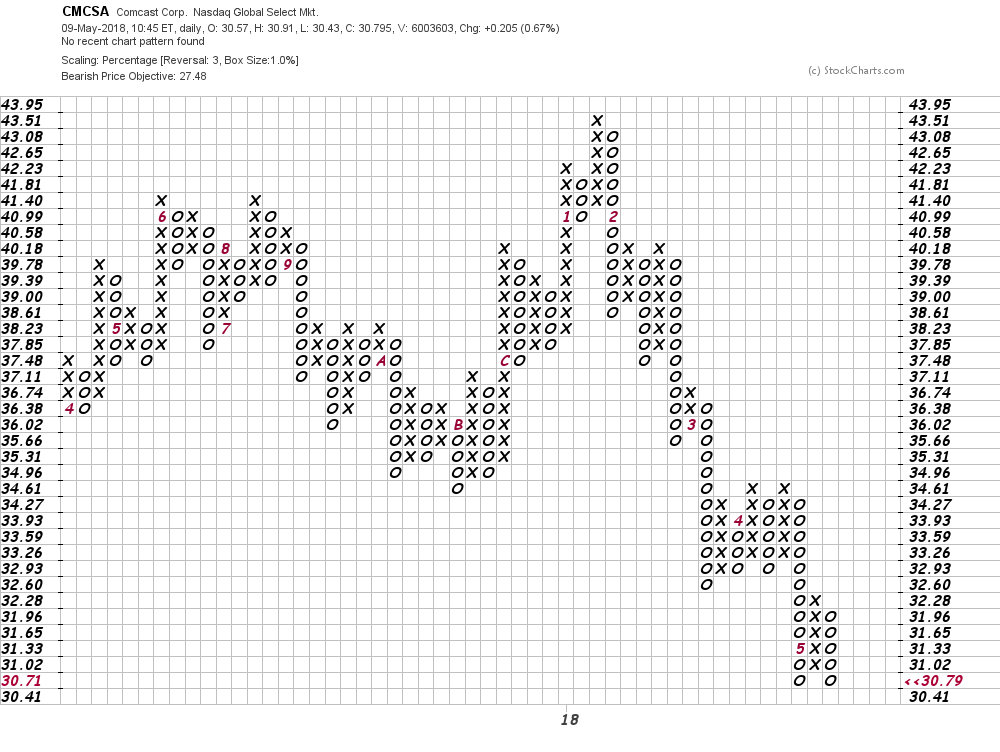 Bottom line: CMCSA is in the news with its rival bid for assets of 21st Century Fox Inc. (FOXA) and a press release on the deal could change things quickly. Add that element to a set of bearish charts and indicators and the bottom line becomes that I would avoid the long side of CMCSA for now.