Whiting Petroleum (WLL) was reviewed at the beginning of April, and I wrote, "Traders could look to go long WLL around $32 and to add on strength above $35. Risking below $28, my target is the upper $50s." Traders who followed this advice have some nice gains in their account. The president and CEO of Whiting was on Mad Money last night to discuss the company's outlook with Jim Cramer. With oil prices moving sharply today in response to Iran headline news and tweets, another look at WLL seems like a good idea today.

In this daily bar chart of WLL, below, we can see how prices have rallied from a low in September. Prices rallied and corrected a few times and in February the chart became stronger. WLL is above the rising 50-day moving average line and the rising 200-day line. The daily On-Balance-Volume (OBV) line gives a clearer representation of volume. The OBV line has been rising since September as buyers of WLL have been more aggressive. The line and the price action has confirmed each other. The Moving Average Convergence Divergence (MACD) oscillator is in a bullish configuration rising above the zero line.

In this weekly bar chart of WLL, below, we can see a large two-year base pattern. Prices are above the rising 40-week moving average line. The weekly OBV line is very strong and the weekly MACD oscillator gave an outright go long signal in March.

In this Point and Figure chart of WLL, below, we can see an impressive rally since March (look for the "3" on the chart). There is some potential chart resistance in the $50-$53 area but a trade at $54 would be a fresh breakout and could open the way to longer-term price targets around $94. 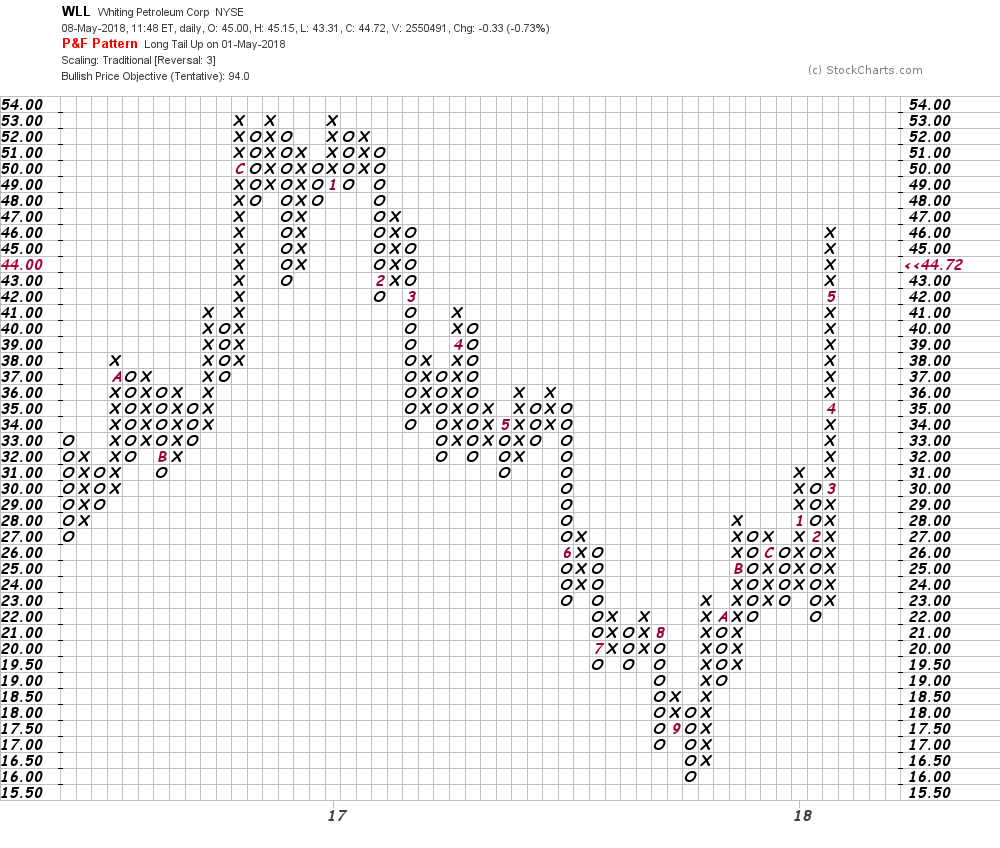 Bottom line: Traders should be happy with their gains so far. I would use a sell-stop at $37 now to lock in some gains. If you want to increase your energy exposure I would wait for WLL to close above $54 before adding new positions.