The stock market had been in significant rally mode, at least from early on in the Thursday session until Monday afternoon. Markets were boosted by Warren Buffett's optimism, and all of his "Americana", not to mention Bershire Hathaway's (BRK.A)   (BRK.B)  massive increase in the firm's holdings of Apple (AAPL) . WTI Crude was much stronger too, lifting it's head above the $70 per barrel level.

Then came the presidential tweet. Always seems to be one of those around the corner. The President, as if this were some kind of game show would announce his decision on the Iran deal today at 2 pm. Extension? Reimposition of sanctions? Why the drama? I can't answer that. I can tell you that algorithms hunt the 24 hour news cycle for key words, and markets turned. As there is some uncertainty around this event, even oil, prompted by yesterday's higher valuation is seeing a degree of profit taking ahead of this afternoon's headlines whatever they might end up being.

Something Calls To Me

Tuesday afternoon. You know the words. If you've been following along, then you are well aware that several names that I have focused upon report this afternoon. Two stocks that I am currently building long positions in, namely Walt Disney (DIS) , and Planet Fitness (PLNT) will put their quarterly numbers to the tape, as well as a third name that I have profiled, but never played for anything more than the short term, that being Diamondback Energy (FANG) . So much going on. So many names. So little time.

Before we even get to our Tuesday focus, let's keep an eye on Nvidia (NVDA) . That stock popped 4% on Monday, closing at $248.68 on considerably higher than average trading volume. This name reports after Thursday's close, and I am long the name. In fact, this one sometimes pushes me close to breaking my first rule of never falling in love with a stock. Problem here is, I would much rather see a name on my book struggle into an earnings release than ramp ahead into one. This kind of late surge can often leave no upside move in the stock once the data is digested. Stay tuned.

NVDA and PLNT are two names that have seen eight consecutive quarters of rising fund ownership, putting the two in some pretty slim company. Planet Fitness has been one my sleeper picks this year. Over the past month, I profiled this name for you in both print and on screen. Our breakout point if it could be held was $40.25. So far so good on that as the last sale now stands at $41.45.

You may recall that we have a $45 target price on the name, with an aggressive target of $51. We'll stand by this for now. Our panic point for the stock is $34.25, which is why we are short 35 puts that expire in a week and a half. That is where we back up the truck. The name is a little expensive at 28 times forward looking earnings, but in my opinion has the growth story comfortably in place, has a decent enough balance sheet, will have no problem meeting short to medium term obligations, and runs with gross profit margins of more than 50% and operating margins of more than 31%. Both of those metrics have been improving, by the way,and will be keyed on tonight.

Last Thursday, I put together a pre-earnings trade idea for Walt Disney that involved both the purchase of equity, as well as the sale of both puts and calls to drag in some extra revenue and reduce basis. The shares hit a trough that day, and if one followed along (I did), you got in about four dollars below where the shares went out last night. I usually do not like to go back to one of my trade ideas this quickly, but I think given the overnight news flow, and the quarterly numbers expected tonight, that touching base on DIS is imperative to any serious investor at this point.

Last night, Reuters reported that Comcast (CMCSA) was prepping an all cash bid for the assets of Fox that would top the $52.4B deal that The Walt Disney Company had in place. Shares of 21st Century Fox (FOXA) ran 3.8% in overnight trading. The catch here is that Comcast is waiting for a decision in the antitrust trial regarding AT&T's (T) planned takeover of Time Warner (TWX) . Key to this whole story is the fact that Comcast had originally offered to pay as much as 16% more than what Disney finally agreed to pay, but Fox's board decided to go with Disney due to regulatory concerns. Think this is complex? Don't forget that Fox owns 39% of Sky PLC in the UK, and Comcast has also made a $31B bid for Sky. Oh, and no word from Verizon (VZ) who at least a ways back had also shown interest in the Fox assets that Disney and Comcast are fighting over. The only sure thing is that these deals get pricier. Okay gang, now don't forget, before you try to price all of this in... Disney reports tonight. Get some.

Nobody caters to both the couch potato as well as the pursuit of the experiential lifestyle better than Walt Disney. The worries for quarter after quarter have centered not just around the decline of ESPN, but really the decline of cable television in general. The king of content has long been the model for monetizing the cable bundle as well as the movie going experience, not to mention successfully selling vacations not just domestically, but globally. Then there's character merchandise. Okay, we all know this already, this consumer based company virtually prints money.

The movie studios have become dominant. From "Black Panther" to "Pixar" to "The Avengers" to "Star Wars", I don't think this is a worry. How well Disney manages it's transformation from the small screen, while television is still a profitable business, to a streaming model that still drives enough revenue to keep that business line from showing too much decay, is the trick. How long it takes to show certainty in this area is how long the name could possibly underperform it's potential. Disney recently launched ESPN+. This new venture will likely garner more attention tonight than it should, but that is where analysts are going to go. They already know most of the other business lines are going to perform well. This is Disney's monster under the bed. I am still a buyer, especially on any kind of earnings related weakness. The industry is widely looking for EPS of $1.70 (whispers are for a few cents higher) tonight on revenue of $14.23B. If the firm hits precisely on revenue, this would represent 6.7% year over year growth. 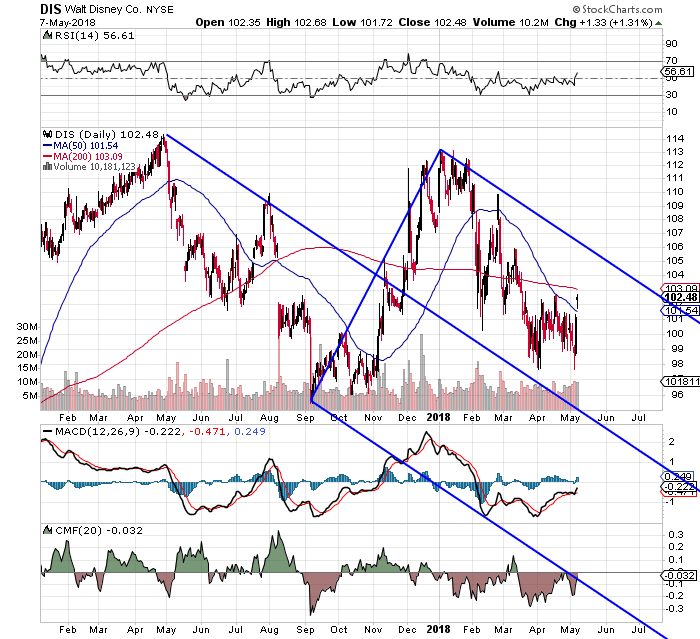 You can see clearly here that with the name headed into earnings, that DIS has colored within the lines, showing great respect for the boundaries of the Pitchfork's upper chamber. Both Relative Strength and Money Flow show improvement, but nothing to write home about. I would point out the suddenly positive looking daily MACD, but treat that subject to the news flow.

What does stand out is the quarterback sneak that the name pulled yesterday to get across the 50 day SMA, and approach the 200 day SMA. A little positive momentum could actually force a "Golden Cross" with a couple of weeks' time. My price target remains $110 for now. I still carry about 25% of my intended long position. I am short 92.50 puts that expire next week, and 87.50 puts that expire in September. I am also short 110 calls that expire in September. Right now, my basis after taking on all of these derivative positions is just above 96. My intention is to get that basis another dollar or so lower than it is.

September 90 puts went out last night at $1.23. Making that sale ahead of these numbers will likely offer more premium then waiting, while also allowing the name time to recover should there be a negative reaction either to the news flow, the data, or Bob Iger's conference call.

Get an email alert each time I write an article for Real Money. Click the "+Follow" next to my byline to this article.
TAGS: Investing | U.S. Equity | Technology | Earnings | Stocks | Entertainment | Gaming | Markets | Options