We've turned sanguine on oil companies in the last few months, now believing that the real renaissance of oil prices, and therefore oil stocks, has moved further out into the future than we once thought. We've attributed this tempered enthusiasm to the continued lunacy of U.S. oil producers who continue to push forward production increases despite low, and in many cases, negative margins -- planning for either OPEC production cuts to bail them out, or for naturally increasing demand to rebalance the marketplace.

While waiting for all this to happen, I have been advising to concentrate on US independent E+P's with strong balance sheets and limited growth plans -- those that will generate free cash flow at lower crude numbers while 'keeping their powder dry' on increasing production until the market conditions are truly right again.

What I've avoided for the most part are the supermajors, with their expensive stock buyback programs and especially dividends. These two are free cash flow killers and always call into question the survivability of both growth potential and the dividends themselves. I've almost hardly discussed any of them in the last year and a half -- save one. And that one has again proved that it is the only supermajor worthy of investment today: Total  (TOT) .

Dividends are the one stockholder perk of the oil companies that always supersedes all others -- supermajors are nearly always found in the portfolios of retirees and pension funds. Still, many of these supermajors will still struggle to generate a profit once dividends are paid out: Chevron, for example, generated $3.9b of free cash in the first quarter, but after using $3.3b for capex it only had $600m to cover a dividend of nearly $2b. They covered it with new debt and asset sales, precisely what we don't want in a 'lower for longer' oil price environment. 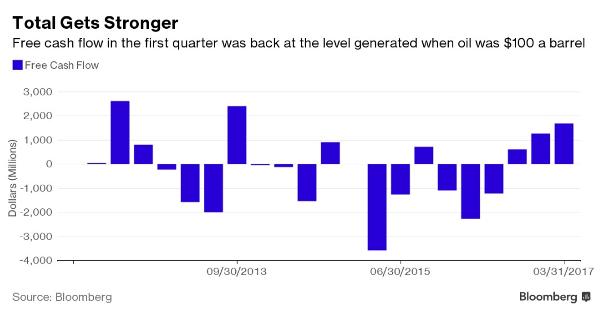 With Total, however, there remains cash after dividends this quarter, which has allowed them the freedom to invest in new projects -- particularly the Vaca Muerta play in Argentina, considered the next best shale play in the world. While the costs to develop Argentinian shale are still 2 to 3 times higher than here in the US, those costs are likely to drop quickly, and acreage lease costs are a fraction of what they are in the hot areas of the Permian and Eagle Ford.

And finally, as we are losing our enthusiasm in the midterm for US E+P's -- where would we probably do best? It would help to have a 'placeholder' oil name that will at the least hold its own, while paying a decent dividend. Total is right there with a more than 5% dividend, proven to be far safer than some others with their continuing improvements in execution.

In a portfolio shot full of holes in the last month by falling oil prices, one name of mine has done beautifully and retains my endorsement -- Total.

Get an email alert each time I write an article for Real Money. Click the "+Follow" next to my byline to this article.
TAGS: Investing | U.S. Equity | Energy | Dividends | Stocks