This commentary originally appeared on Real Money Pro on May 5. Click here to learn about this dynamic market information service for active traders.

It wasn't that long ago that the U.S. stock market and the price of WTI crude oil were almost perfectly positively correlated. I recall times at which the correlation was running about 90% (meaning that on any particular day crude oil settled lower, the S&P 500 would also settle lower and vice versa).

That correlation has quietly dissolved, however. When measured over the last 180 trading days, or roughly nine months of market action, the price of oil and the S&P 500 (in the futures market anyway) settled in the same direction a mere 17% of the time. For most traders, a correlation this small is considered to be no correlation at all. Thus, while oil has slid from $54 to $44 in a few short weeks, the equity market hasn't seemed to notice.

In our view, the positive correlation between stock and oil was more of an emotional one than a fundamental one. And of course, the algo-traders programmed their systems to buy or sell the S&P according to action in the oil market, which prolonged and exaggerated the phenomenon.

Although you couldn't have convinced investors in 2016 that a $10 drop in oil was inconsequential to the health of the economy, it is clear that at the moment investors believe it is. Nevertheless, that could change quickly if oil breaks below $40.

WTI crude oil in the $30s will likely trigger concerns over bank loan debt and more specifically the junk bond market because at such prices many of the U.S. shale oil producers start operating in the red. Until then, we suspect investors will be content putting their heads in the sand knowing that even $47ish crude is almost double what it was during the high-yield market panic that brought the broad market down with it. Since then, oil companies and banks have trimmed the fat and are better equipped for a sluggish energy market.

While we do think the U.S. stock market is overvalued, we don't necessarily think it will be crude that brings it down (if it ever does go into correction). Our analysis suggests that oil will take another leg lower but the low $40s should hold (although a temporary probe into the high $30s is certainly possible).

Let's take a look at the chart. 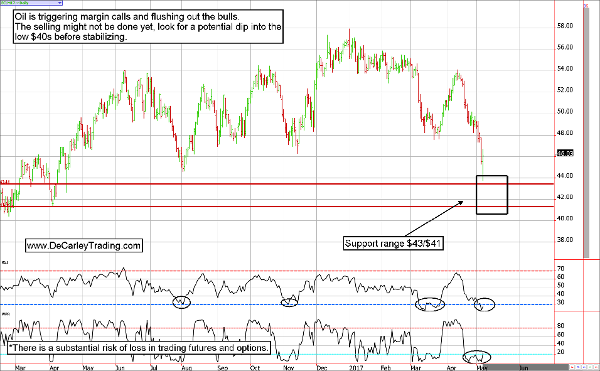 On a daily chart, the price of June WTI crude oil is clearly oversold. The RSI (Relative Strength Index) has fallen below 30 for only the fourth time in the last year. On previous occasions, the price of crude oil eventually rallied out of the hole. The Williams %R is under 20, which is also indicative of an oversold market. 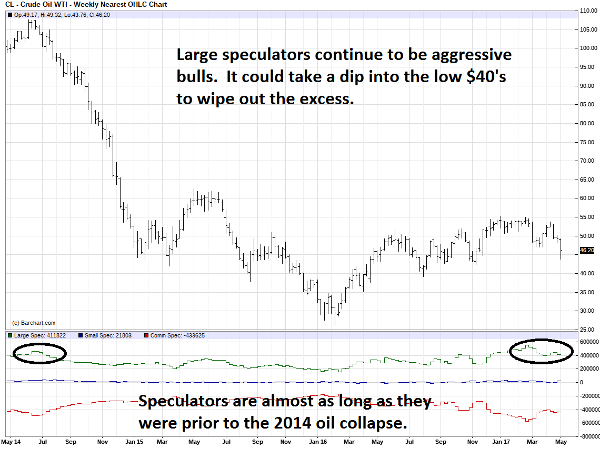 Some are arguing that Friday's overnight lows and subsequent recovery point toward a key reversal in crude oil. We agree this is a textbook reversal pattern but there are a few factors making us doubt the market's ability to recover without making a slightly lower low. We continue to see massive speculative long positions in this market, which work against the prospects of a technical bounce.

Large speculators (those trading crude oil futures and options in large contract sizes) have been relentless and aggressive bulls. During the most recent $10.00 plunge in oil prices, this group of traders shed a mere fraction of their bullish trades.

As you can imagine, those long crude oil futures from $54 are down roughly $10,000 per contract and are either getting uneasy, queasy or being badgered by the margin man to liquidate holdings. Thus, we have a feeling that the price of crude will, perhaps after a bit of a short-term bounce, make its way into the $43 to $41 per barrel area as traders lighten up to get into positions with more reasonable risk. This will give the market an opportunity to retest the April of 2016 lows as well as toy with psychological support near $40. 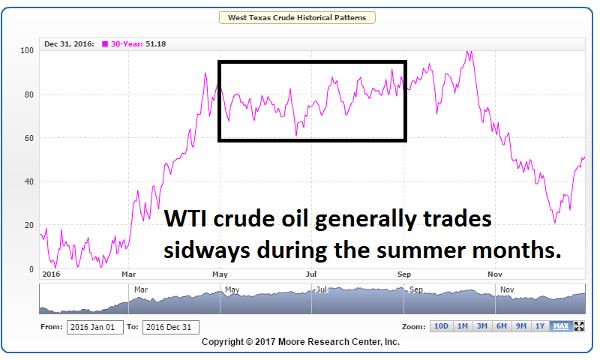 In addition, the MRCI (Moore Research Center Inc.) offers cash market data that point toward sideways action throughout most of the summer months.

In short, any oil rally will need to be supported by fundamentals because seasonals probably won't be helpful and speculators are mostly long so fresh buyers might be scarce in the short-run.

Get an email alert each time I write an article for Real Money. Click the "+Follow" next to my byline to this article.
TAGS: Commodities | Markets | Energy | Investing | Futures | How-to