"The Cold War is over but Cold War thinking survives."

What says Friday more than a disgusting, yet absolutely delicious plate of nachos? Gross, right? Yet, for traders, and even more so for investors, Fridays have at least recently brought with them a risk-off sentiment more often than not. Some way to ruin a weekend. With President Trump's economic team in China led by Treasury Secretary Mnuchin, any kind of positive breakthrough seems a little further away than it did just a few days ago, as China made their point by halting purchases of soybeans from the United States.

The U.S. team has made what any sentient being would consider to be quite reasonable demands. In full disclosure, I am American, love my country, and run the risk of bias here. Still, hear me out.

The U.S. had outlined an eight-point plan, and sent it to the Chinese government ahead of these meetings. Chief among the items that the president is trying to even up a bit would be the trade imbalance between the two nations. The U.S. has requested, according to the Wall Street Journal, a reduction of $200 billion in this imbalance by the end of 2020 (Bet we'd settle for less). That deficit in total ran as high as $375 billion last year.

The U.S. has also requested that China reduce tariffs on incoming non-critical products to levels equal to tariffs faced by Chinese products imported into the U.S. Problem with that? Then there's the whole intellectual property dispute, which is sure to be a sticking point, as the U.S. will take action in response, and the Chinese are sure to deny that this problem even exists.

Everyone will play nice in the sandbox on the surface. Still, the Chinese have something to lose here, and will not willingly surrender their position of superiority in trade. Markets have obviously been pricing in a certain degree of failure on this front, which will help push along the narrative on consumer level inflation. This expectation of a certain degree of failure is being most felt, in my opinion, across both U.S. tech firms, as well as large industrial firms. Perhaps this is what prompted what we saw occur on the Caterpillar (CAT) earnings call.

It may be as simple as the Chinese realizing two things about U.S. culture. For one, we as a people tend to be either unable, or unwilling to endure short-term pain, even if it would put future generations in a better position going forward. Secondly, President Trump faces political opposition, and perhaps vulnerabilities that President Xi never could.

Xi's plan could be simply to stall, and delay, gambling that over time, his opponent on these matters ends up in a place where fundamentally altering global trade relationships becomes either less of a focus, or less politically advantageous as a pursuit.

The FOMC left rates alone on Wednesday. No surprise there. No press conference. No economic forecasting. No plate spinners. No jugglers. No changes in policy. We've got that pattern down pat. Still there was enough of a change to the May 2 official policy statement from the release on March 21 to signal to those of us trying to play this game that Fed ChairJay Powell does not need much impetus to stay on course.

This subtle, yet striking change is the new Fed head letting investors know that he's still leaning quite hawkish. The very next line in the statement read "Market-based measures of inflation compensation have increased in recent months but remain low" in March, but saw the words "have increased in recent months" omitted in May. Hence, the Fed head is aware that this problem persists, and signals ahead just how important today's year-over-year wage print is.

For those of you currently reading the sports section on the way to work today, that number has been running at 2.7%. This is also today's expectation, and dwarfs the Non-Farm Payrolls number, and the headline unemployment rate in significance to the marketplace this morning.

Aren't top and bottom-line beats good enough? Apparently not when forward-looking guidance is weaker than expected, and especially when that news is leaked prior to its official release causing a trading halt during regular trading hours.

Shares of Activision Blizzard (ATVI) closed at $66.82 on Thursday, a 2.3% decline from Wednesday's close. The stock had been as much as 6% lower after the accidental leak, and prior to the trading halt.

Earnings were solid. On an adjusted basis, earnings per share saw a 23% year-over-year rise, while the all-important revenue number climbed 16%. It was that guidance, however, that gave investors pause. Current quarter sales are now expected to come in close to $1.38 billion, well below what had been consensus of $1.49 billion. The firm also guided the full-year revenue number to levels below what Wall Street had been looking for.

Activision Blizzard has 374 million monthly active users across its largest game franchises. You know the names: "Call of Duty," "Overwatch," and "World of Warcraft" are the significant business lines here. However, I am not really sure if we should be disappointed in the Overwatch League or in e-Sports in general. This is why I invested in this name, thinking that this was an area about to take off. Maybe it still will. The league has certainly attracted some big-name sports ownership such as the Kraft family (New England Patriots) and the Wilpons (New York Mets) among others. Then again, maybe not.

The villain, if you're an investor in, or a fan of ATVI would be the free-to-play game "Fortnite Battle Royal," an Epic games product. This is a game, where most of the planet's population is wiped out and the players are pitted against the backdrop of a zombie apocalypse. Fortnite has taken gamer attention away from publishers attempting to monetize the business.

The response (my response) would be for traders to work their way out of their long positions in ATVI. I am still long 35% of my original position, having based my interest on the Overwatch League and being mildly disappointed in the attention garnered by that league. I am likely to hang onto that 35% as I see no value in a fire sale.

Where did the money raised by my previous sales in ATVI go? While I have been raising cash -- you all know that -- I have also been building a long position in the ADR of Ubisoft Entertainment SA (UBSFY) . This cute little thing trades on the pink sheets, and has been on the rise, while other video game publishers have been a little wobbly.

Ubisoft is a French gamer company headquartered in Montreuil, France, not to be confused with Montreal, Quebec. This firm has subsidiaries all over the world, and you know their titles. How about "Assassin's Creed," "Prince of Persia," "Far Cry," and the Tom Clancy names. Yup, all these are theirs. Actually, in terms of revenue and market cap, this firm is fourth place in the Americas and Europe, behind ATVI, Electronic Arts (EA) , and Take-Two Interactive Software (TTWO) .

I am only long about 20% of what I would like to be long in UBSFY. The name ran on me over the past month, and the position is up a welcome 17.3%, but this move happened prior to the implementation of my full long. "Far Cry 5," the most successful Far Cry game has been the catalyst for this recent pop.

By my own rules, this is a trade, and not an investment. 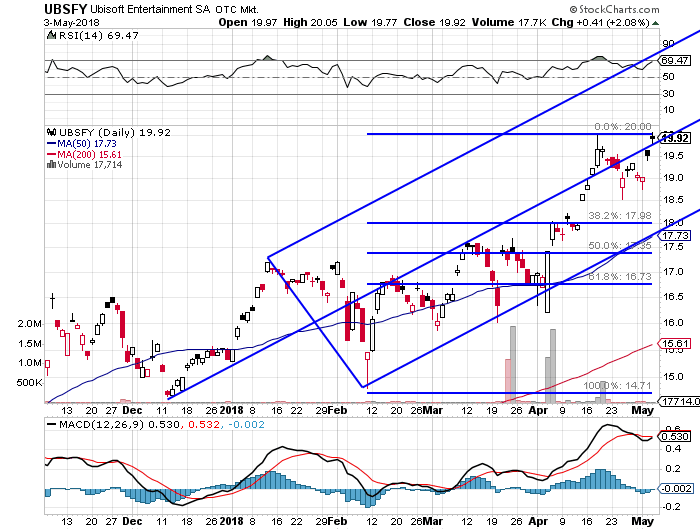 The $20 level is where this light trader potentially breaks out. We see a take and a hold there; I think we can see 22.50 or 23. A failure here, and the panic point comes in between $17.75 and $18, literally the difference between the 50-day simple moving average (SMA) and a 38.2% re-tracement from the top of this chart.