MGM Resorts International (MGM) was reviewed on Real Money in late January, where I wrote, "MGM might correct lower towards $35 or so before finding renewed buying interest. Our longer-term price target of $51 may not be seen until we have another period of sideways price action/accumulation. Traders should risk a close below $33."

Looking back over the price action the past three months I can quickly see that prices have behaved weaker than I anticipated. With MGM trading around $31 traders should be on the sidelines. Let's review the latest charts and indicators to see what the second quarter may bring for this stock mentioned last night by Jim Cramer on Mad Money.

In this daily bar chart of MGM, below, we can see that in late April prices gapped down and closed below the cresting 200-day moving average line. The shorter and quicker-to-respond 50-day average line has had a negative slope since late March. The daily On-Balance-Volume (OBV) line peaks in late January and shows me that sellers of MGM have been more aggressive the past three months. The trend-following Moving Average Convergence Divergence (MACD) oscillator is below the zero line in bearish territory.

In this weekly bar chart of MGM, below, we can see that prices have closed below the cresting 40-week moving average line. The weekly OBV line has bee neutral the past four months. The weekly MACD oscillator is in a bearish mode but still above the zero line.

In this Point and Figure chart of MGM, below, we can see a potential downside price target of $25 being projected. 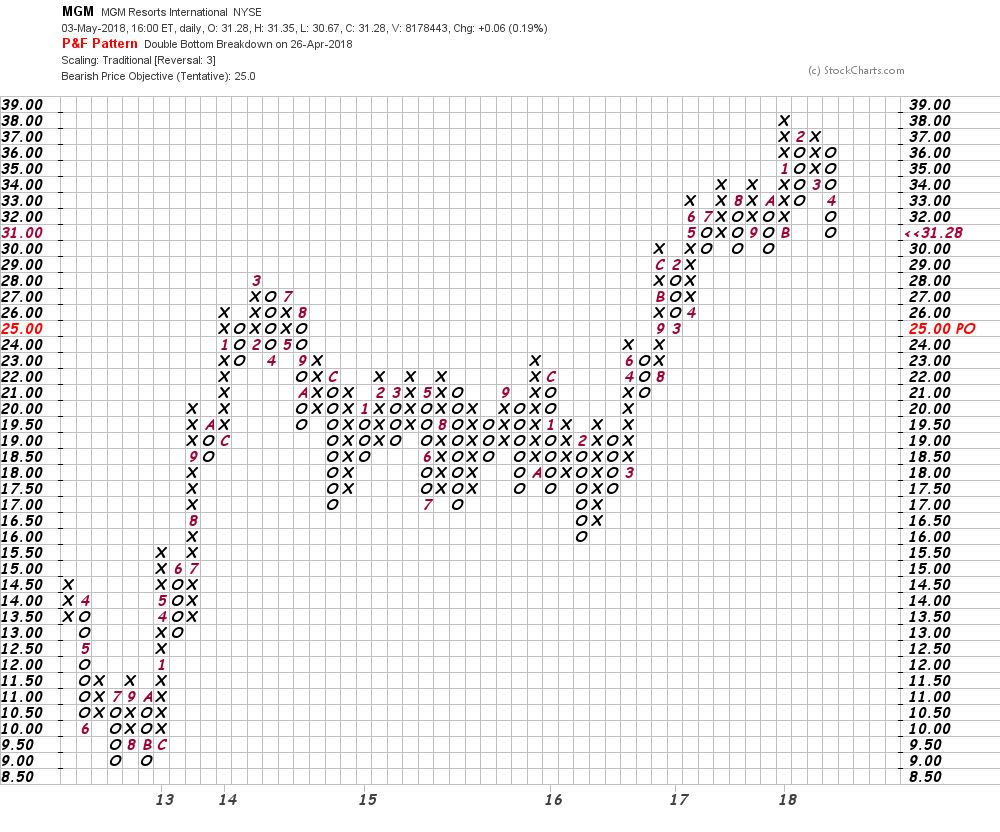 Bottom line: MGM has some chart support in the $31-$29.50 area and prices could hold around there and then trade sideways. However, if this support is broken then I would look for a test of the $26 area.

Get an email alert each time I write an article for Real Money. Click the "+Follow" next to my byline to this article.
TAGS: Investing | U.S. Equity | Consumer Discretionary | Gaming | How-to | Mad Money

As With Real Estate, Location Dictates Which Homebuilders to Favor

It's important to focus on those builders that primarily operate in the fast-growing, business-friendly areas of the country.

Jim Cramer: Lululemon's Lulu of a Story Again Shows the Power of the Rich

The maker of athleisure apparel unveils an upside surprise that illustrates how spending by people of means benefits higher-end names.

Apple Is Poised to Reach More Highs in the First Quarter

Does it get any better?

Lennar Could Build Strength but Its Charts Are Mixed

The home builder's technical signals are not extremely bearish but aren't pound-the-table bullish, either.

Not for the Faint of Heart: Alibaba Could Pass the $300 Area in the Months Ahead

Can we count on the recent uptrend to continue?