"I signed on as the clown, and, by golly, I'll keep up my end of the bargain."

Investors have long ignored fundamentals when placing value upon Tesla (TSLA) . Those who believe in the name, and it's CEO, Elon Musk, have been referred to as a cult following. That much is certainly true. What is also true is that the firm, in releasing information highlights the positive, always promising a sunny day, and the sweetest music that you ever heard in the future. The firm covers it's collective ears, and hums loudly trying not to hear. Ignorance is bliss as storm clouds gather. "Beat" EPS expectations by reporting $-3.35? No problem. Never mind that this is an adjusted number. Remove one time items, and the EPS number becomes an even nastier $-4.19. Remove one time items and the reported loss of $568M becomes a loss of $709M. Ugly with a capital U. Please let these numbers sink in.

Production of the Model 3 has ramped up to more than 2K a week for a whopping three weeks in a row. Standing ovation. That is until the firm shut down production for a week in order to "enable higher levels of output" The firm had targeted 2500 Model 3's per week by the end of the first quarter...and clearly failed to deliver on that target, but now wants you to believe that they will be able to produce 5K Model 3's per week within a couple of months. Tesla, while admitting that margins for the firm's vehicles are still negative, tells you that as production continues to expand that these margins will improve to "break even" in Q2 and then turn profitable. Of course they will. Sweet music indeed. Know what? Everyone else who manufactures autos can design and deliver electric vehicles. Get over yourselves, Tesla.

Know what? I try not to judge. Honest. Take stupid pictures and post them on Twitter (TWTR) ? So what. Poor taste? Of course, but not being an investor in the name, I took a pass on being too critical. Last night, around 4 pm, I tried to do what I often try to do around Tesla earnings releases. I tried to short the stock. I was informed that my order was in limbo because the name was hard to borrow. Instead of waiting around, possibly for hours to see if indeed I had a valid order, I cancelled, and watched. My instinct however, was correct.

Cash burn? Need to tap capital markets? Reservations for future sales? Spending levels? All valid questions, extremely valid questions for a publicly traded company that continues to lose money hand over fist. Officially, Tesla's statement will tell investors that these conditions, (though still fundamentally unacceptable, IMHO) are improving. Cash is higher than thought, though still dwarfed by debt. Cap-Ex should decline, though interest expenses are obviously moving the wrong way. These questions, though important to Wall Street analysts who represent institutional investors, are "boring", or "dry" according to the clown prince. In fact, Musk rudely cut off one analyst mid-question.

Ignore the hard questions and turn instead to a retail investor who supposedly has a YouTube channel devoted to the firm? Hmm. Can you say Eccentric? Genius? Childish? Yes, yes, and yes. You know how I feel. Perhaps the worst thing that could happen to this company could be to actually meet it's goals and turn itself into a profitable business. It is at that point that the cult following might fade, and the valuation would become something based on results, and not on a fairy tale. It is at that point that a certain level of professionalism might be required of the chief executive. Perhaps that is the bottom line. This stock remains trade-able. Once Wall Street actually sees some real progress, I think this one becomes a "Strong Sell."

The House of Mouse

Shares of Walt Disney (DIS) are exhibiting some weakness. The news flow has largely been positive. First, Pivotal analyst Brian Wieser upgraded Disney, though that upgrade was merely to a "hold" rating, and the revised price target still lower than the last sale. Then BMO analyst Daniel Salmon did something similar, placing a "Market Perform" on the name, and raising the price target to par (trader talk for $100). So what, you say? The ball might be starting to roll the right way, I say.

The latest "Avengers" movie is yet another smash hit for the studios. Disney seems to be pretty close to the only one that can still get the large audience to go out to the movies. Don't look now but there is another 'Star Wars" movie to your immediate front, and that's kind of what I am getting at here.

We make much in the financial media of two trending versions of modern culture... The "Stay at Home" economy, and the "Experiential" economy. Well, which one is it? Which trend will rule the day? Perhaps both. There is truly only one company that I can think of that will profit in either world going forward.

The pain comes from the slow death of cable television, and the highly profitable bundle package. Obviously, broadcasters must evolve, and Disney is well into that process. This has been, and is quite painful. Still it helps if one must evolve into whatever becomes of broadcast, to own one's own content. Stay home, watch a movie, or sports. Order a pizza, Disney makes money, or Disney will. Go to the movies? Profit. Family trip to a resort area? Disney profits. Go on an expensive cruise? Disney makes money. Merchandise sales related to a wide array of characters? Boom...you guesses it...Disney profits.

Yes, the company's evolution has been drawn out. Reports of the demise of one of the world's most well rounded consumer discretionary firms are however, greatly exaggerated. The name trades at just 13 times forward looking earnings, fyi. This becomes a question, for me...more of where to enter, not if one should. I am long the stock, but my position is very small, I am also short puts that expire in a couple of weeks with a much lower strike price. What to do next? Let's take a look. 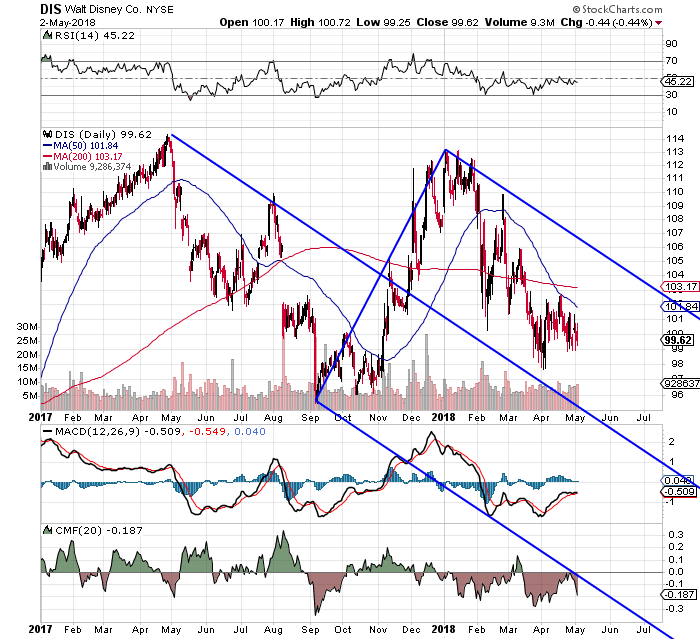 It rained on Disney in April. You all know what April showers bring, right? What I see is a nasty "death cross" that struck mid-month. This has allowed us to see prices below that $100 mark yet again. Money Flow has been awful all year, however you will not learn much from Relative Strength or daily MACD indicators. This firm reports next Tuesday after the closing bell, and that event will likely be our catalyst one way or the other. I almost hope there is a poor reaction, so that I can dig in at a lower price than simply profit on my currently tiny holding.

Over the past year or so, you can see the development of lower highs coupled with higher lows. There looks to be the early development of a Pitchfork pattern that I have illustrated for you, but this is not yet clear. My thought here is that this pitchfork does continue to fill out. I see support dropping into the mid-90's as we approach next week's release. I also see, if that support does in fact show up, resistance much higher in response to the anticipation of the "Star Wars" movie that will hit theaters on May 25. The name needs 104 to break out.

- Purchase DIS equity small right here (last:99.62). Prepare to at least triple the size of the position on a post-earnings dip below 95. Should the shares run higher on earnings, you have a trade, and not an investment. Both are positives here.

- Write both puts and/or calls in order to reduce net basis. Target strike prices that comfort you and fit your risk profile. I am currently short 92.50 May 18 puts. I sold those at 95 cents, they are currently worth roughly 35 cents. Right now, I am considering writing both September 90 puts at roughly $1.67, and/or September 110 calls at $1.51.

Understand that while these options trades would indeed expose me to having to purchase equity at 90, and limit my profit taking to a sale price of 110, they would also reduce the net basis on a like sized equity purchase by an incredible $3.18. You kids like discounts don't ya?

Get an email alert each time I write an article for Real Money. Click the "+Follow" next to my byline to this article.
TAGS: Investing | U.S. Equity | Consumer Discretionary | Transportation | Economy | Entertainment | Gaming | Options | Stocks