Proofpoint  (PFPT) has traded sideways in a tighter and tighter range since November (chart below). Some chart readers might call this pattern an equilateral triangle where a downward sloping trend line and an upward sloping trend line come together at an apex. It doesn't matter whether you believe in chart patterns or not, but you should at least see higher lows in December, March and April. Lower highs can be seen in November, February and April.

In this daily bar chart of PFPT, above, we can see other clues worth mentioning. The On-Balance-Volume (OBV) line confirmed the rally up until November. From November the OBV line drifts slightly lower until April. A downward sloping OBV line during a triangle formation should not be unusual as it is driven by shrinking volume within a tightening trading range. In the lower panel is the Moving Average Convergence Divergence (MACD) oscillator which shows two cover shorts buy signals -- one in December and the second one last month.

In this weekly chart of PFPT, above, we can see that prices are testing the rising 40-week moving average line. The weekly OBV line is neutral and the weekly MACD oscillator is above the zero line and getting close to a bullish crossover and buy signal. 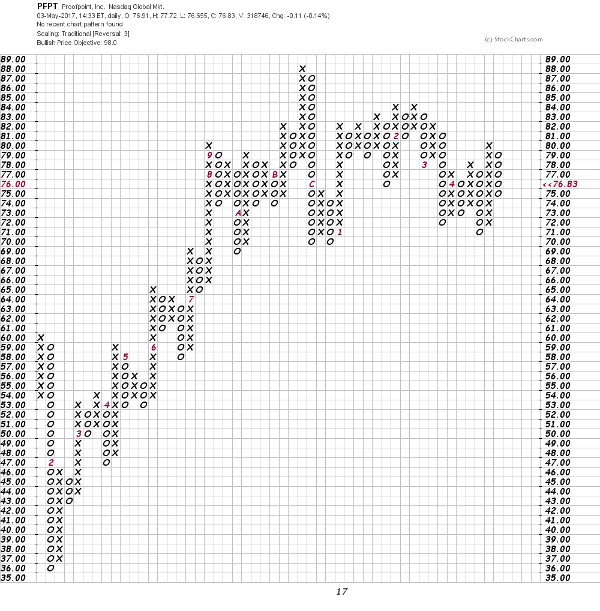 In this Point and Figure chart of PFPT, above, we get a different look at this triangle pattern. A trade at $81 is likely to start a move to the upside and potentially a breakout that can take prices to the $98 area.

Bottom line -- go long PFPT on a close above $81 and then risk a close below $74. The mid to upper $90s is our price target in the months ahead.