Martin Richenhagen, the chairman and CEO of AGCO Corp. (AGCO)  , appeared on "Mad Money" last evening. I last reviewed the charts of AGCO last year in the middle of August, suggesting that "If prices see renewed selling next week and close below the 200-day moving average line, we could weaken to the Point and Figure target of $56. I would look to nail down some profits on AGCO and see if we get a better buying opportunity in the next three months."

Checking out the charts today I can see that our price levels were pretty good but our timing was a few months off. Let's review the charts and indicators again.

In this updated AGCO chart below, we can see that there was a buying opportunity in November which was within our three month time frame from August. Prices recently declined to $59, a few dollars short of our $56 Point and Figure target. The November bounce developed problems in January when prices could not break above $74 and the On-Balance-Volume (OBV) moved up to a new high.

The new high in the OBV line told us that buyers of AGCO were more aggressive but it did not translate into price gains. When AGCO broke lower in early February we saw trading volume soar telling us that the longs from January were aggressive sellers. The slope of the 50-day moving average has been bearish since early February and it crossed below the cresting 200-day average line in the middle of March for a bearish dead cross.

The Moving Average Convergence Divergence (MACD) oscillator has been below the zero line since early February and is still in a bearish configuration.

In this weekly bar chart of AGCO, below, we can see a triple top pattern for AGCO around $75. In February prices closed below the peaking 40-week moving average line where they still are today.

The weekly OBV line has been drifting lower the past four months as sellers have been more aggressive. The weekly MACD oscillator is well below the zero line in bearish territory.

In this Point and Figure chart of AGCO, below, we can see the price breakdown and a bearish downside price target of $51 being projected. 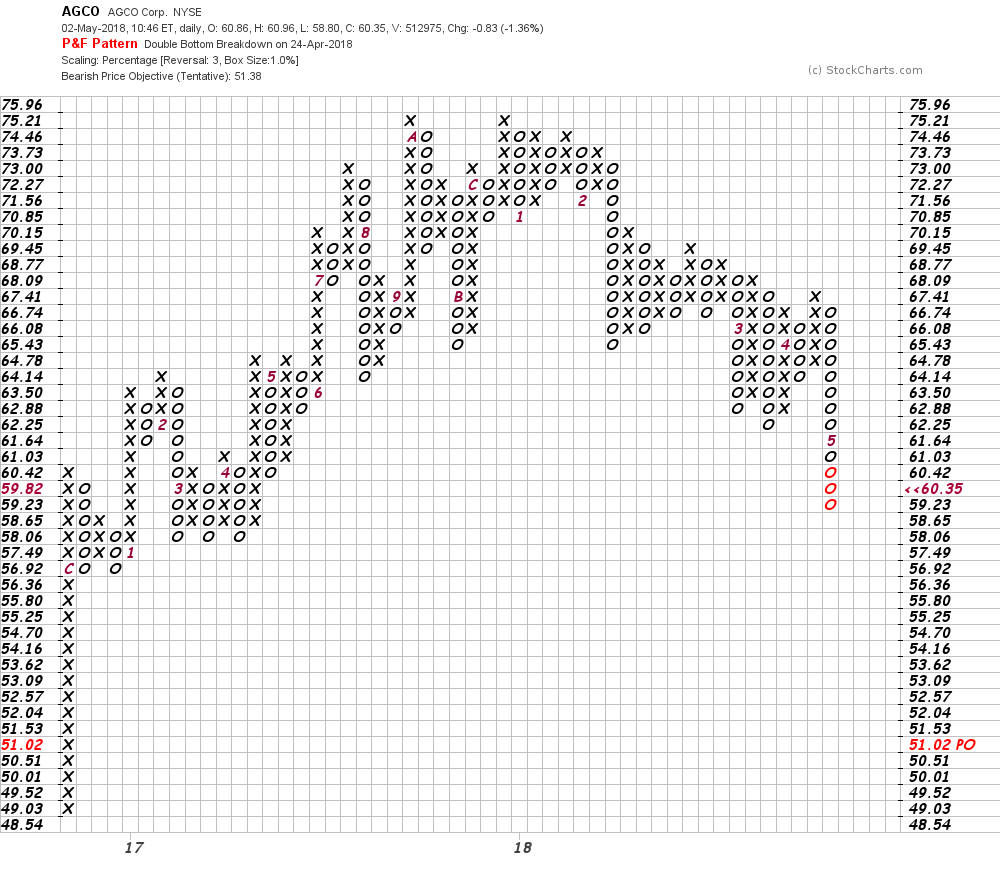 Bottom line: Prices are in a downtrend and could be considered extended or oversold, however this does not make it a buying opportunity yet. I would stand aside until a low and a retest has been made.