The daily On-Balance-Volume (OBV) line peaked in February and turned lower with the price action. A declining OBV line happens when there is heavier volume traded on down days, which implies that sellers of IBM are more aggressive. In the bottom panel of the chart below is the momentum study, which is not showing any slowdown in the price decline.

In this weekly chart of IBM, above, we can see how prices have declined below the flattening 40-week moving average line. The weekly OBV line has been in a downtrend the past three years and just made a new low, suggesting that traders have been liquidating longs for a long time. The bottom panel shows a recent downside cross of the MACD oscillator. This take-profits sell signal could be followed by an outright sell signal if the oscillator crosses below the zero line. 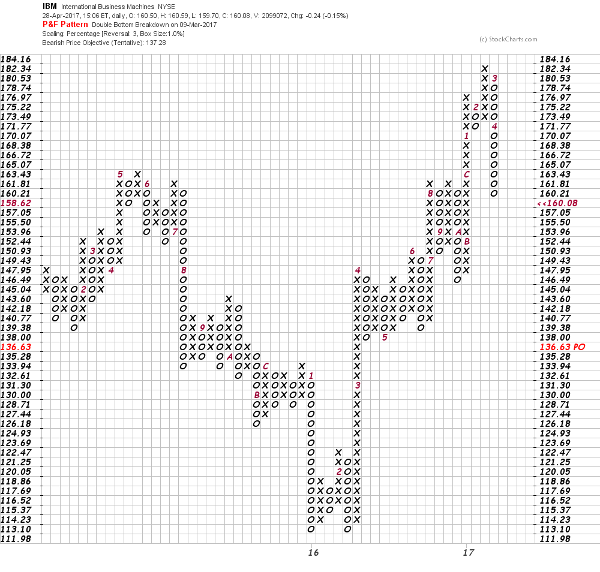 In this Point and Figure chart of IBM, above, we can see the breakdown in prices without the gap. Prices are back into the top of a prior congestion area, which may or may not halt the decline. If prices continued lower, this charting approach yields a downside target of $136 and change.

Bottom line: The chart and indicators of IBM look bearish at this juncture. Traders and investors should avoid the long side. Short-sellers should also avoid IBM as the risk is probably too high.