The head of American Electric Power (AEP) , Nick Akins, was interviewed by our one and only Jim Cramer last night on Mad Money. The president and CEO reiterated his full-year guidance. This morning let's see how the charts and indicators look for this utility yielding 3.6%.

We last looked at AEP at the beginning of the year and wrote: "AEP has pulled back and generated some bearish signals in the past month. This decline probably has further to go but our charts and indicators are not decisive. Traders should avoid the long side of AEP and investors may want to raise sell stop protection to a close below $70." AEP declined from around $71 to short of $63 in early February. Prices have recovered and are now on a stronger footing.

In this updated daily bar chart of AEP, below, we can see a new pattern of higher lows and higher highs from early February. Prices are above the rising 50-day moving average line but still, for now, below the flat 200-day line. Notice the heavier level of trading volume in January and February? This heavy volume may have been the changing of positions from weak hands to stronger hands.

The daily On-Balance-Volume (OBV) line shows a turnaround in February and early March followed by a rise. A rising OBV line signals more aggressive buying. The Moving Average Convergence Divergence (MACD) oscillator shows two cover shorts buy signals in January and February and an outright go long signal in late March as the oscillator crossed back above the zero line.

In this weekly bar chart of AEP, below, the decline from $78 to below $64 looks like a big correction in a longer-term uptrend. Prices are rallying back toward the underside of the declining 40-week moving average line. The weekly OBV line shows a rise for much of the past three years and looks to be firming again in the past three months. The weekly MACD oscillator has crossed to the upside for a cover shorts buy signal on this longer time frame.

In this Point and Figure chart of AEP, below, we can see an upside price target of $76.38. Not a new high but close. 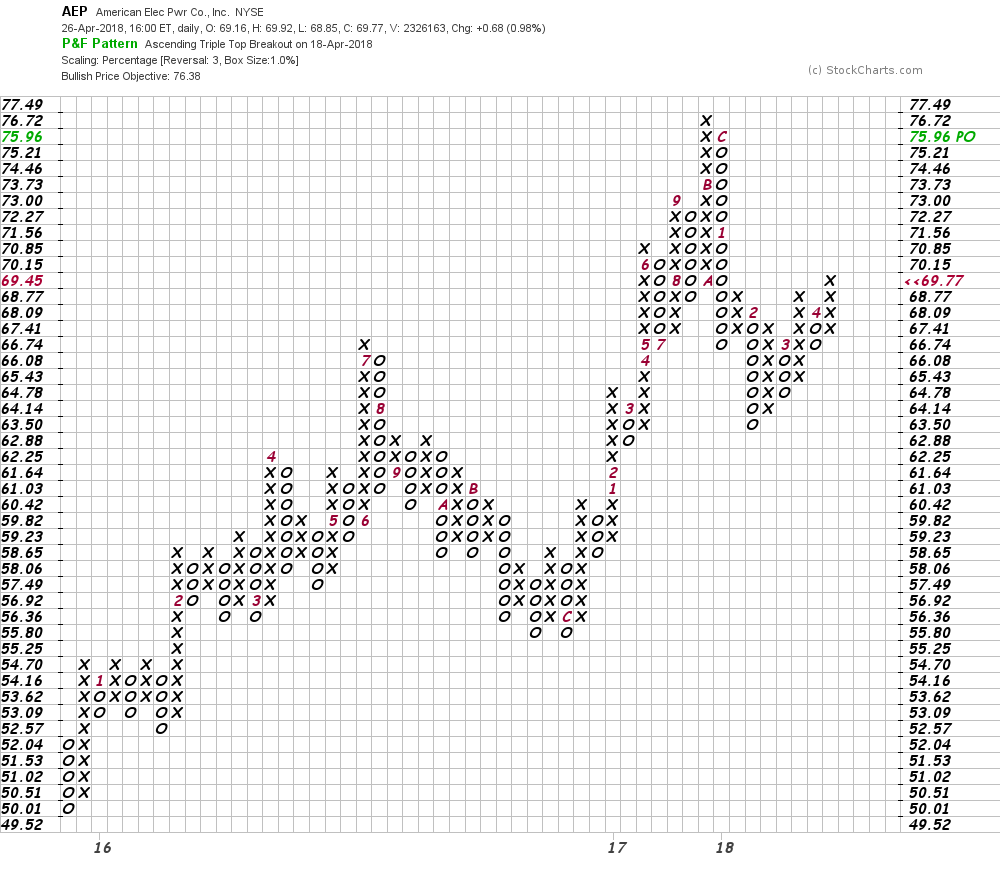 Bottom line: Traders or investors looking for yield and upside gains should take a look at AEP. I would buy AEP at current levels and on any dip to $68 or toward $67, if available. Risk under $65 looking for gains to the $76-$78 area again.

Get an email alert each time I write an article for Real Money. Click the "+Follow" next to my byline to this article.
TAGS: Investing | U.S. Equity | Utilities | Dividends | How-to | Mad Money