Domino's Pizza, Inc. (DPZ) gapped to the upside Thursday making a new high for the move up. This upside move gave us new price targets from our charts. Let's see what is in the "chart refrigerator" from last night and suggest a strategy with extra toppings.

In this daily bar chart of DPZ, below, we can see that prices were in a downtrend until January when the pattern of lower lows and lower highs was broken. In January, DPZ rallied above it October high. Prices started the year off with a gap higher above the rising 200-day moving average line. The slope of the 50-day average turned positive in early January and we can see a bullish golden cross of the 50-day line crossing the 200-day line in early February.

The daily On-Balance-Volume (OBV) line started to rise in December telling us that buyers of DPZ had started to act more aggressively with heavier volume being transacted on days when prices closed higher. The trend-following Moving Average Convergence Divergence (MACD) oscillator has been in a bearish mode (but not an outright sell) from late January but now looks to be to be turning up again.

In this weekly bar chart of DPZ, below, we can see that prices were below the rising 40-week moving average line for several months last year. Prices are now firmly back above this indicator. The weekly OBV line has been rising since early 2016 and is close to making a new high for the move up to confirm this price advance. The weekly MACD oscillator is clearly in a bullish configuration and close to new highs. 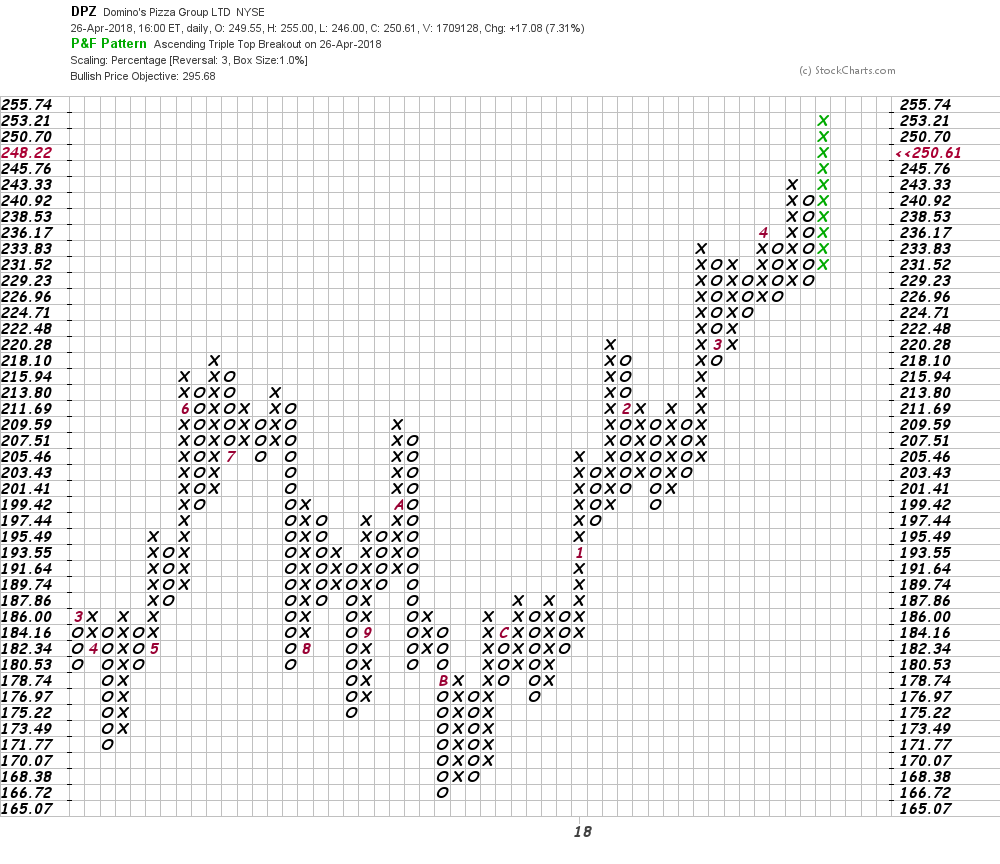 Bottom line: Full disclosure -- back in November I did not like the charts of DPZ ("DPZ looks vulnerable to further declines and the chart is not appealing right now no matter how many toppings are added."). So no victory lap for me. With a price target near $300 now from our Point and Figure chart I would suggest that traders try to go long closer to $240, risking below $230 looking for gains near $300.

Get an email alert each time I write an article for Real Money. Click the "+Follow" next to my byline to this article.
TAGS: Investing | U.S. Equity | Consumer Staples | How-to