"Personally, I have nightmares about the unstoppable monster."

Beast Mode. Amazon. The river and the rain forest are both mighty. Maybe just as mighty ... is the firm, still known as Amazon.com, Inc. (AMZN) . That firm is also known on Wall Street quite simply as "The Death Star" for it's ability to simply crush the competition.

The firm's website may still be the official name of the corporation, but quite honestly, the online retail business, suddenly... disappointed. Don't get me wrong, Amazon online stores still posted revenue of $27B, good enough for 13% year over year growth. That remains the core of the firm, but the driver of these quarterly results that just blew the lid off of the share price last night was the performance, or should I just say the outperformance of Amazon Web Services. To say that this business line is accelerating would in no way properly indicate just what is going on here. This cloud computing business printed revenue growth of 49%, with the number running up to $5.44B out of the firm's total revs of $51B. This group now generates 10.6% of the firm's entire ballgame, and accounts for some 73% of the firm's operating income of $1.9B. Makes me glad that I stayed long the name. Kind of makes me want to get the balance of my long in Oracle (ORCL) off of my book.

What of Amazon's retail business? There's a lot of news in that space. While the e-commerce business mildly disappointed on still significantly growing numbers, the firm's physical presence, still small in comparison, did slightly beat expectations. Last night, Amazon CFO Brian Olsavsky announced that there would be a price increase in the annual fee for Prime membership. In June, the cost of that "loyalty program" will rise from the current $99 to $119. Does this hurt the firm, or has Prime just become too convenient to the public for price point to matter. After all, in his annual letter to shareholders, CEO Jeff Bezos announced that global penetration for the program had reached over 100 million accounts. the additional $20 bucks a head should help cut into rapidly rising costs incurred just to deliver packages to your doorstep. Those costs ran up to $7.8B for the quarter reported, which comes to unacceptable growth of 66% year over year itself.

Now, what of the traditional retailers? Like the old slasher movies, the star of the show has them down, but are they out? Maybe not so fast on that front. We all saw Retail Sales surprise to the upside in March. That said, much of that positivity was centered around motor vehicles and not the core. Still sales of furniture, health & personal care, as well as electronics all grew nicely.

The Enemy of My Enemy

We have often spoken of Walmart (WMT) as the only legitimate rival for Amazon in the retail space. Walmart has done much to increase the firm's online presence across many fronts. The firm has teams up with Alphabet (GOOGL) in various ways to provide a type of online shopping mall as well as to try to provide fulfillment should verbal ordering through now popular home assistant technology ever really take off.

Now comes news that Walmart is modernizing it's website. The new site should be available to consumers in May, and will make it that much more convenient to reorder regularly used products. The new site will also aid consumers in discovering what is trending in their areas. According to comScore, Amazon.com attracts roughly 180M unique visitors per month. Walmart.com is well behind at 100M, but they are on the map. I know that when I think that I want to buy anything, I check both of these sites prior to laying out any of my hard earned dough.

When it comes to Walmart, pay attention to any breaking news over the next week or so regarding Indian e-commerce giant Flipkart. The expectation is that Walmart will pay up to $12B for a stake of 60% to 80% of that firm. Rumors are rampant that once Walmart takes a controlling stake in Flipkart that Alphabet (remember, we mentioned the burgeoning WMT-GOOGL alliance) will likely invest in the development of this business. Projections are that by 2027, the broad retail market in India will hit something like $1.8T, up from $650B in 2016. Total Indian consumption by that time is projected to reach $3.6T. Food and groceries will be the driver in India over these next 10 years, and Walmart is positioning themselves for relevance in a global economy by investing in this e-space as well as in both Indian agriculture and distribution. 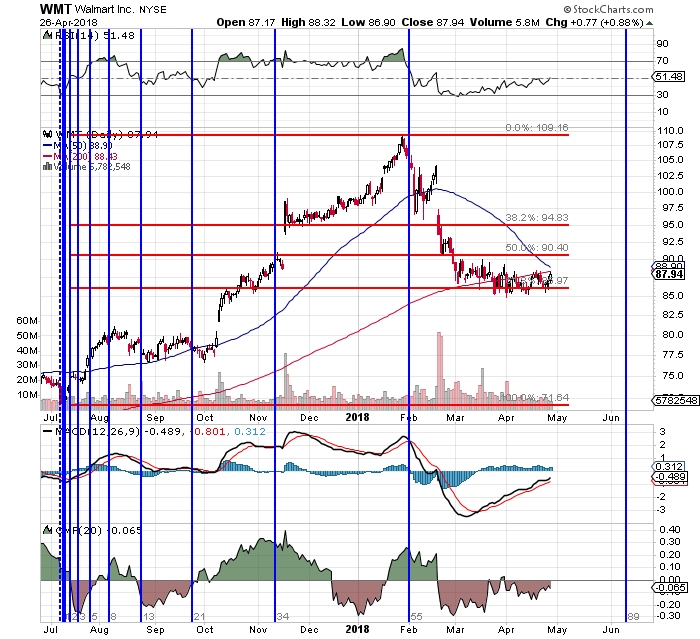 A couple of warnings stare back at the chart-gazer here. Lousy Money Flow, and a possibly imminent death cross would be apparent. Still, on the positive side, this name seems to have built a base along the 61.8% retracement level after never having recovered from it's February meltdown. Earnings are due for this name on May 17th. However, once a Fibonacci Time Zone model is laid over the chart, one can see that significant moves for the stock have come fairly close to occurring on schedule, and the next event, according to this model, does not line up until early June.

I own the name in very small size. What I am thinking is adding some additional shares now ahead any Flipkart news and ahead of earnings. On top of that, $80 June 15th puts went out last night at $0.75. These puts expire after the June timeline, which may or may not be there. That said, the 80 dollar level was a significant level for this stock last autumn, and could reemerge on negative news. If one takes a bite, I see reducing one's basis by three quarters of a point at the outset that exposes one to risk at a discount as a potential positive.

You all know that I love Kohl's (KSS) and have for quite some time. You may not know, depending on how closely you follow me is that I am flat the name. That was a target price thing. Remember, never fall in love. My thought after puking the shares in the mid-60's was to buy them back when they came in. They have come in, but not quite as far as I would like. My thoughts were in the mid-50's, but the name has found support in the upper 50's. Then I got to thinking about Macy's (M) . Macy's did not trade at an all-time high yesterday, but it did trade at it's highest point since the cows came home.

The truth is that both of these names look okay to me right now. While KSS has done the right thing by staying away from the mall, and cozying up to Amazon by accepting the death star's returns and test marketing some products on behalf of the e-commerce giant, Macy's has built a loyalty program intended to increase foot traffic in their stores and seems to cozying up to Apple (AAPL) much the same way that KSS did with Amazon.

Both firms trade at just 10 or 11 times forward looking earnings. Both sport healthy current ratios, and weak looking quick ratios, but that is not uncommon for large retailers as large inventories are required to run such a business. Both have suffered negative three year EPS growth, and negative three year sales growth, KSS less so than Macy's.... however, Macy's margins look to be in better shape than KSS. Both pay a nice dividend, yielding 4% plus. I like both, and I am flat both. Hmm. 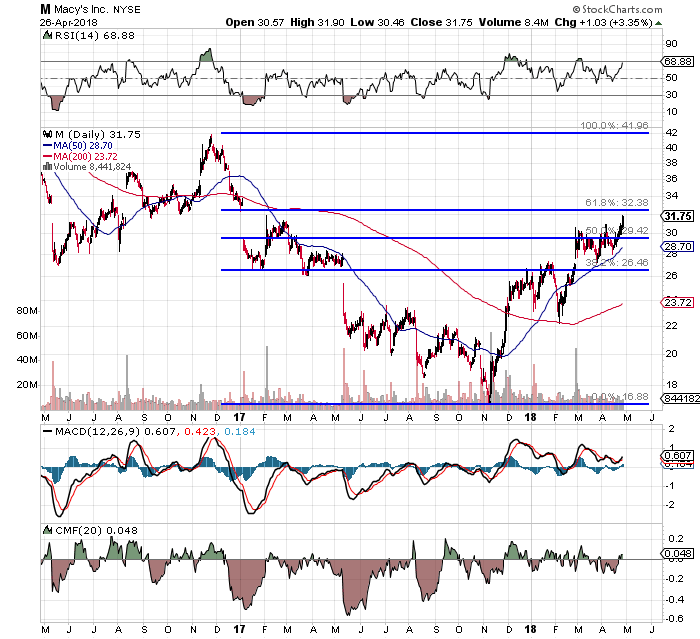 Having missed the recent positive movement in this name, I would rather wait to see if the shares can take and hold the 32.25 level before committing capital to equity. In the meantime, June 15 $26 puts went out last night paying 41 cents. Might as well raise some lunch money at a point of risk that looks like obvious support at a deep discount. 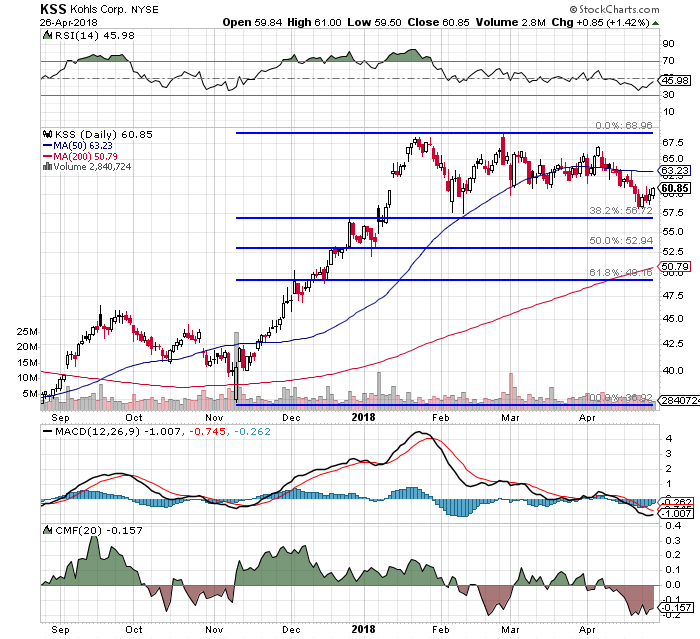 I think that I can still buy these back below $57. So, I will wait, and I will act when that time comes. This is one example where writing put options becomes really attractive. I already know where I like the name. Last night, June 15th 57.50 puts closed at $2.50. Hmm. Bring is $250 now, while reducing my net point of purchase to $55 should the shares collapse. My original plan was to buy these shares in the mid-50's. Even if the shares never come in...250 bucks is 250 bucks.

(Apple, Alphabet, Amazon and Kohl's are holdings in Jim Cramer's Action Alerts PLUS Charitable Trust Portfolio. Want to be alerted before Cramer buys or sells the stocks? Learn more now.)

Meet Jim Cramer, Stephen "Sarge" Guilfoyle and more than a dozen other top market experts on Saturday, May 5, in New York at How to Diversity Your Portfolio: A Boot Camp for Investors.

All attendees will also receive a free one-year subscription to our newest premium Web site, Retirement Daily (a $99 value).

Get an email alert each time I write an article for Real Money. Click the "+Follow" next to my byline to this article.
TAGS: Investing | U.S. Equity | Technology | Markets | E-Commerce | Stocks