Union Pacific Corp. (UNP) has been struggling the past four months every time it has reached the $140 area. Prices broke below the 50-day moving average line and the early April lows today. Is the marketplace telling us that the course of least resistance is lower or does UNP still have the ability to breakout to the topside?

When I looked at UNP in early December, things were steaming along as I wrote, "Maintain longs in UNP. Investors could raise their stop loss protection to a close below $110 and traders could use a stop below $115. A shallow dip toward $125 could be used to do additional buying." Prices continued higher in January and stopped short of our "intermediate-term price objective of $145.38."

Let's check out the latest set of charts and indicators.

In this daily bar chart of UNP, below, we can see that in late February, March and again in mid-April that resistance was encountered around $140. Each time prices failed to move higher. The level of volume has declined the past two months but what is interesting is that the daily On-Balance-Volume (OBV) line has risen the past three months telling us that buyers of UNP have been more aggressive.

The trend-following Moving Average Convergence Divergence (MACD) oscillator has moved sideways around the zero line the past two months and could turn up or down depending the price action going forward.

In this weekly chart of UNP, below, we have a more positive outlook with respect to the price action and the indicators. Prices are above the rising 40-week moving average line and the overall price pattern so far this year looks an equilateral triangle. Triangles usually break out in the direction of the previous trend which this case is up. Equilateral triangles are visually balanced and could break out in either direction.

The weekly OBV line shows a strong rise from early 2016 to this January and then a three-month correction. The OBV line looks like it has turned up again this month. The weekly MACD oscillator has been above the zero line since September and in February it gave a take profits sell signal. The MACD lines are narrowing again and could cross to the upside in the weeks ahead.

In this Point and Figure chart of UNP, below, we can see a downside price target of $113.71 being projected. 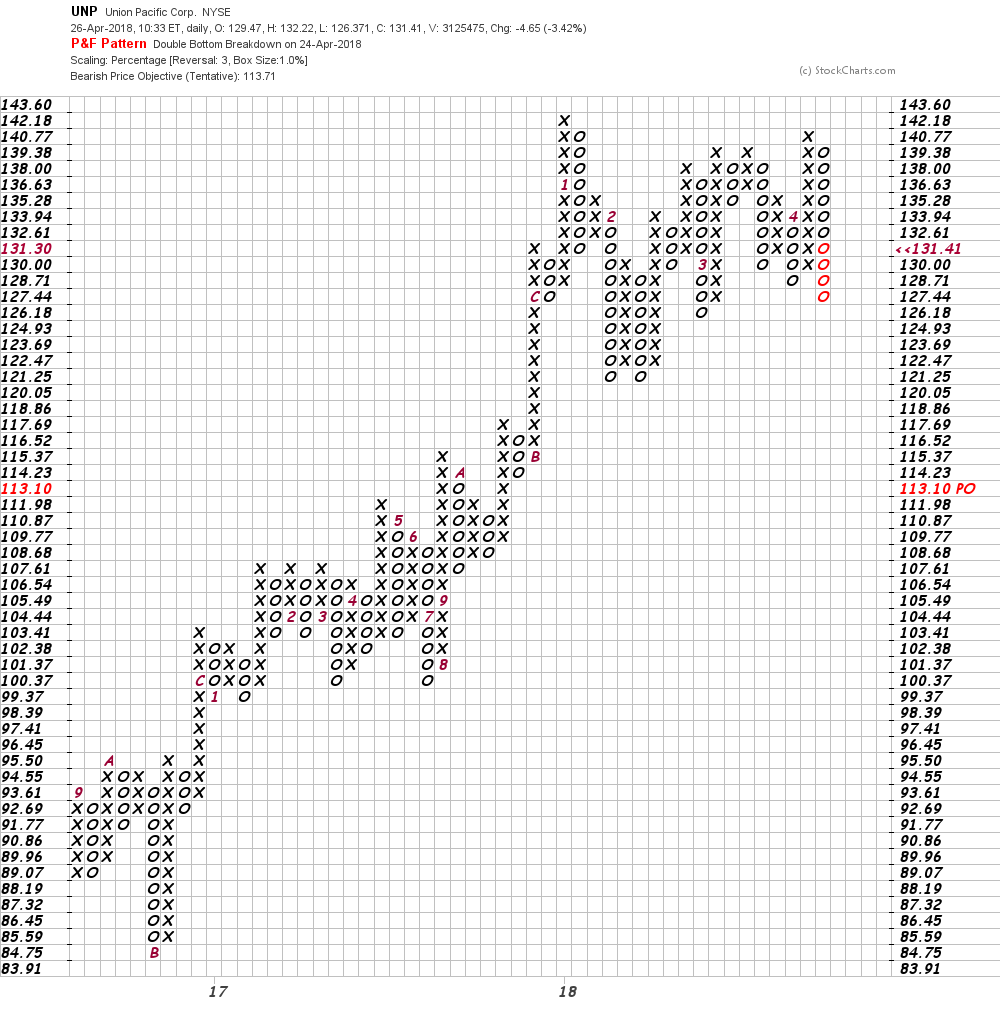 Bottom line: This is an interesting juncture for a technical analyst. We have a weak looking daily bar chart and a bearish Point and Figure chart yet our weekly bar chart is overall positive. The best course of action for me is to wait for a strong close above $140 looking for gains to the $160-$165 area.

It's Tempting to Quit This Portfolio While I'm Waaaay Ahead, but I Won't

The 2021 Tax Loss Selling Recovery Portfolio is killing it, which makes it tempting to shut it down and harvest the profits, but we'll let the experiment roll on.

Can Ford Keep on Truckin'?

We are updating our technical strategy on Ford.

I've seen this pattern on a number of SPACs since February.

The charts of the maker of electrified powertrain systems largely are painting a bearish picture for its shares.

Traders Get a Round Trip With Shares of Virgin Galactic