We reviewed Norfolk Southern Corp. (NSC)  in early December, noting that, "Prices are pointed up but some bearish divergences persist. Investors can continue to hold raising their sell stop to a close below $120 now. Traders should use a stop below $125 on new longs but a close below $135 will start to make me nervous."

With some hindsight we can see now (chart below) that prices moved higher into early January and then finally the bearish divergences impacted prices which corrected until early this month. Our suggested stop point below $125 was never reached and recently prices have reversed to the upside.

In this daily bar chart of NSC, below, we can see that a new pattern of higher lows and higher highs was established Wednesday with the sharp rally to the upside. The slope of the 50-day moving average has now turned flat from down and the rising 200-day line was successfully tested Tuesday.

Look at the movement of the On-Balance-Volume (OBV) line the past four months. Even as NSC corrected more than $25 to downside, the OBV line was steady and it has turned up to a new high in April. A steady OBV line in the face of a correction tells you that buyers largely held their long positions.

The Moving Average Convergence Divergence (MACD) oscillator in the lower panel gave a cover shorts buy signal in the middle of April and is nearly above the zero line for an outright go long signal.

In this weekly bar chart of NSC, below, we can see how the rising 40-week moving average line has defined the rally since early 2016. The weekly OBV line was very strong from late 2016 to its peak in January of this year. A new up-leg looks like it has begun this month. The weekly MACD oscillator is narrowing and could give us a new outright go long signal in the weeks ahead.

In this Point and Figure chart of NSC, below, we can see the recent move up and a $161 price target. 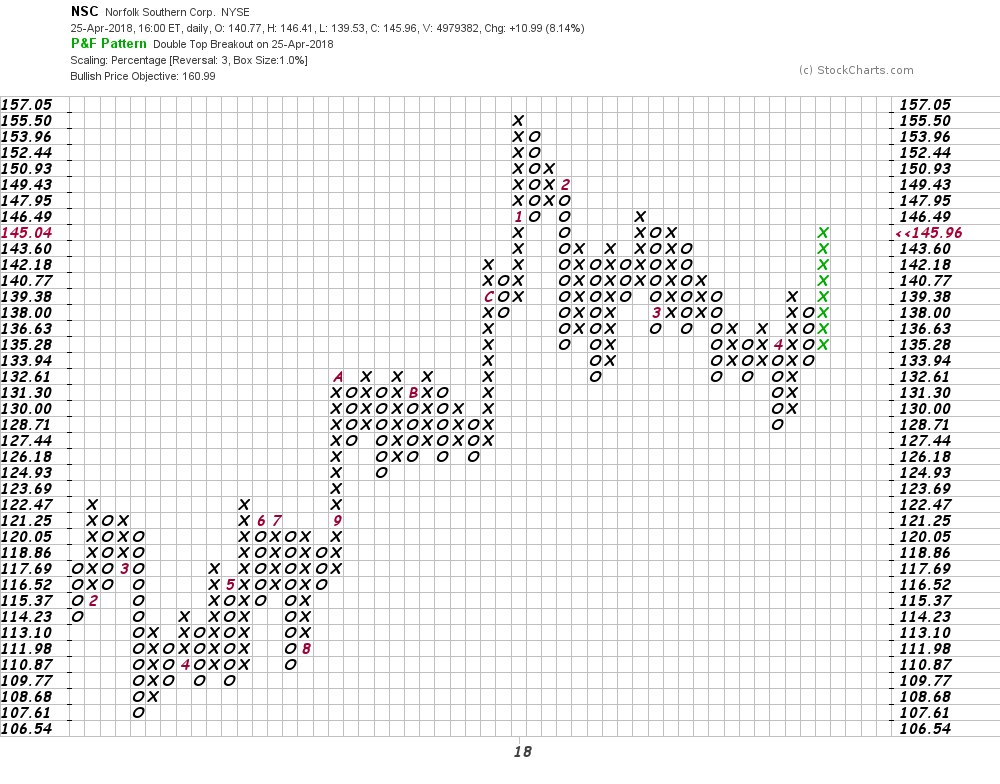 Bottom line: The recent sharp run-up in prices could see some corrective price action -- either sideways or lower. Traders looking to go long NSC should wait for a dip to around $143-$142 before probing the long side. Risk below $138 looking for gains to the low $160s.

The president takes aim at 31 companies that the Defense Department says have ties to the Chinese military.