Kansas City Southern (KSU) has been trading sideways for the past five months but an upside breakout could be in the cards in the near future. We last took a ride on KSU in early December, telling readers "Traders could go long KSU on a dip toward $110 if available. Risk a close below $104 looking for gains to the mid-$130s."

Traders got their dip later in December and a rally in January but KSU could not break out over $114 and prices fell to a lower low in February. KSU made a higher low in early March and is back up near the highs and ready for another possible breakout. Let's check further.

In this daily bar chart of KSU, below, we can see that prices are testing the flat to rising 50-day moving average line and the rising 200-day line.

The daily On-Balance-Volume (OBV) line has been roughly trading sideways the past three months. The Moving Average Convergence Divergence (MACD) oscillator crossed above the zero line in late March for a fresh go long signal.

In this weekly bar chart of KSU, below, we see a picture where prices look ready to turn higher. KSU has been testing the rising 40-week moving average line.

The weekly OBV line is showing some positive movement the past two months suggesting that buyers of KSU have become more aggressive.

The weekly MACD oscillator has narrowed and could cross to the upside soon for a new outright go long signal.

In this Point and Figure chart of KSU, below, we can see a bullish pattern and a trade at $116 would be a triple-top breakout. A $133 price target is being projected. 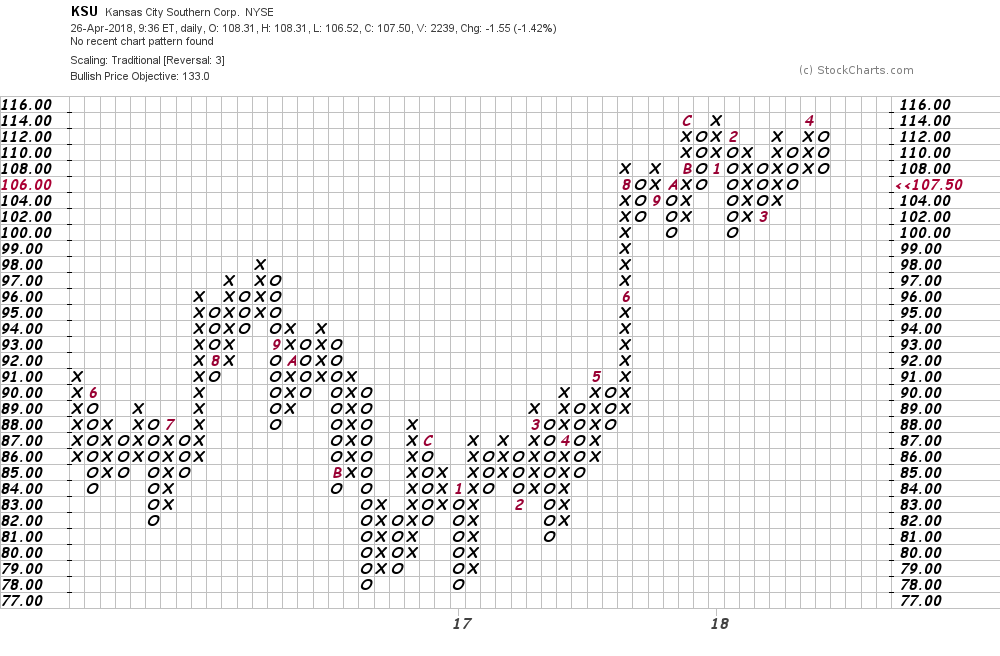 Bottom line: KSU could trade sideways in the near-term but the indicators suggest an upside breakout. Traders could go long above $115 and $116 risking below $108 looking for gains to the mid-$130's.