AK Steel Holding (AKS) share price topped out in December/January and declined the past four months. Prices are showing some stability around $6 and there is a bullish divergence between the price action and the momentum study since late January but this may not be enough to turn prices higher again. The shares also received an upgrade today from TheStreet's Quant Rating service.

Let's go through our favorite charts and indicators to see what sort of strategy may work at this juncture.

In this daily bar chart of AKS, below, we can see the price action and indicators over the past 12 months. Prices broke down in the back half of January as they closed below the peaking 50-day moving average line. The slope of the 50-day average turned negative in February and is still pointed down. AKS was testing the rising 200-day moving average line in late March and early April but it eventually broke and rebounded to fail at the underside of this longer-term indicator.

The On-Balance-Volume (OBV) line gave us some advanced warning on this price weakness when it turned lower in late December, diverging from the price action. The OBV line has continued to weaken and suggests that sellers remain more aggressive even after a $5 decline on an $11 stock.

In the lower panel is the 12-day momentum study, which shows a bullish divergence. Prices have made lower lows from late January into April while the momentum study has made higher lows -- prices have declined but the pace of the decline has slowed. Momentum is a leading indicator but not very precise in terms of timing. A divergence should be considered a "heads up signal" and not necessarily a buy or sell signal.

In the weekly chart of AKS, below, we see mixed signals. Prices have decline for about four months and have closed below the rising 40-week moving average line. This chart shows some support around $6 but more support is likely around $5. The weekly OBV line turned up in October and showed a strong rise or bullish confirmation of the price gains. The OBV line on this timeframe has remained steady even as prices weakened.

The trend-following Moving Average Convergence Divergence (MACD) oscillator crossed to a take profits sell signal back in January and is pointed down to the zero line. A decline below the zero line would be an outright sell signal.

This Point and Figure chart of AKS, below, is interesting in that prices were unable to break the high at $11.00. Support on this chart looks to be around $5.50 and $5.00. 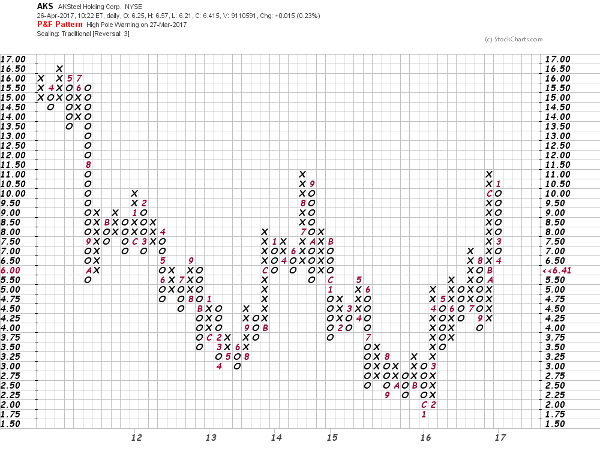 Bottom line: The bullish divergence seen on the daily chart between the price action and the momentum study is a start but more positive price action is needed to attract me back to the long side of AKS.

Get an email alert each time I write an article for Real Money. Click the "+Follow" next to my byline to this article.
TAGS: Investing | U.S. Equity | Basic Materials | Commodities