PulteGroup, Inc. (PHM) reported first-quarter earnings Tuesday and is higher early Wednesday morning. I have ignored PHM for more than a year, writing way back then "PHM is poised to break its 2013 highs and climb still higher. I would look to go long PHM in the $23-$24 area and add on a close above $24 with $33/$34 my upside price objective."

With the benefit of 13-months of hindsight we can see that PHM reached our price target in December and made a peak in late January. Let's take a look at the correction over the past three months and see what the charts and indicators look like today.

The On-Balance-Volume (OBV) line peaks in early December some two months before the price zenith, but the line does not decline much into February and has been stable since.

The Moving Average Convergence Divergence (MACD) oscillator also peaks in early December and crosses the zero line in early February for an outright sell signal. This indicator has improved the past two months and is right on the zero line waiting for the next signal.

In this three-year weekly bar chart of PHM, below, we can see a base pattern or consolidation pattern from 2015 to early 2017. Prices crossed above and below the 40-week moving average line until early 2017 and the slope has been positive since the middle of 2016. The volume of trading has declined the past three months which is typical during a pullback or correction.

The weekly OBV line did rise in 2017 but has been in a decline since early December suggesting that sellers of PHM have been more aggressive. The weekly MACD oscillator crossed to the downside in January and is close to crossing the zero line but the two moving averages that make up this indicator have been narrowing. A fresh go long signal could be coming.

In this Point and Figure chart of PHM, below, we can see a sideways consolidation pattern since February (look for the "2" on the chart). A trade up at $31.33 would be a double top break out and give us an upside price target of $33.79. This would be an OK rally but not a breakout above $34.96. 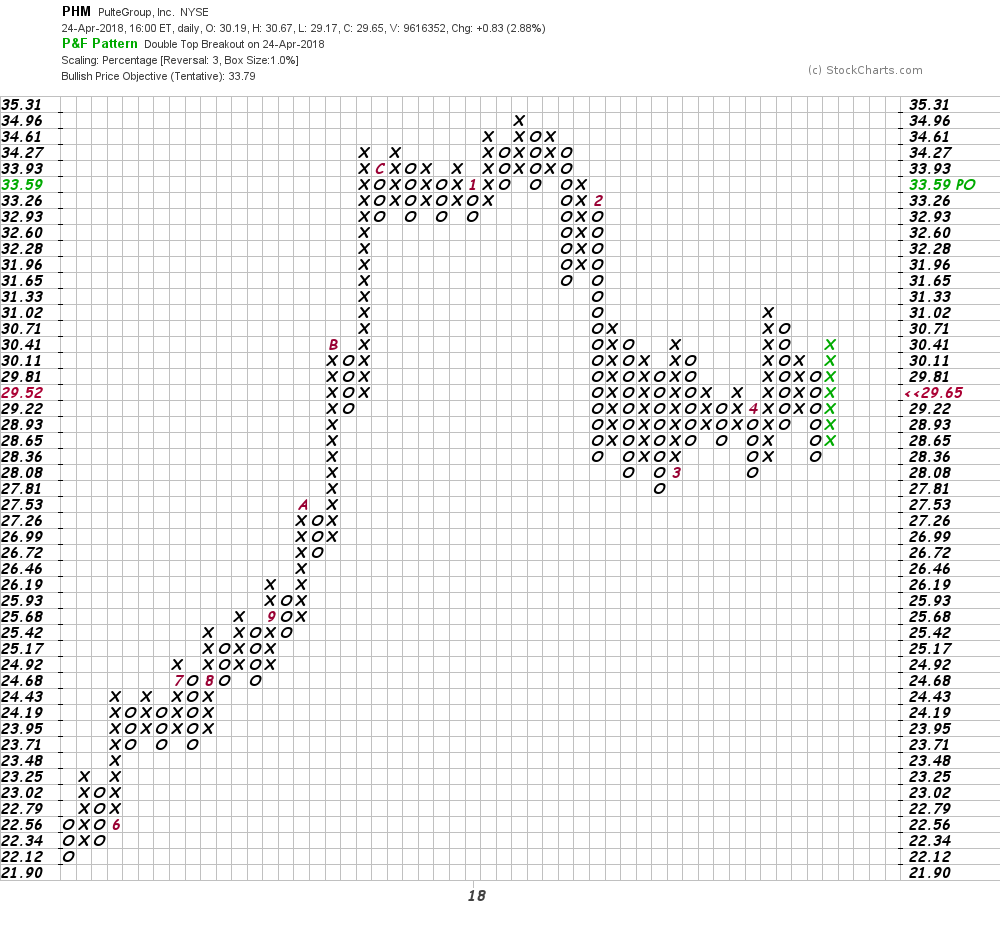 Bottom line: If PHM can close above $31 it will be a small upside breakout. Prices could stall at or below the $33-$35 resistance area from December/January however.

Get an email alert each time I write an article for Real Money. Click the "+Follow" next to my byline to this article.
TAGS: Investing | U.S. Equity | Basic Materials | Earnings | How-to