The mission was clear. Daedalus had warned his son to follow in his path of flight, to avoid the dangers of complacency and hubris. Keeping a level head was the only way that the two men could escape King Minos of Crete. Daedalus had fashioned wings of feathers and wax, and had tested them himself. You know the rest of the story. Icarus, the son of Daedalus, would become overjoyed in his flight. He would soar too close to the sun, the wax that held the wings together would melt, and this tale would come to a tragic conclusion.

Not quite as daring as having to escape an evil monarch, the Philadelphia Semiconductor Index had reached incredible levels by early March. On a one year chart, this industry specific index had been up 45% at that point, only to have surrendered more than 14% in little more than a month's time. Too close to the sun? Let's think on this. Do we have an actual distribution event, or a serious spate of profit-taking in a place where equity prices had run amok? Forget FANG, or FAANG, or FAANNG. Those acronyms are narrow, the semis are much broader, and are where many retail investors had planted far more seeds than they could in thousand dollar names. Low trading volumes on the NASDAQ may indicate nothing more than some profit taking or some kind of a rotation with an end date. Still, it sure does feel like the whole group is skating on this thin ice every day.

Many of these firms appear in great shape. Forward looking valuations, with the notable exception of Nvidia (NVDA) are very low. From Micron (MU) at 5 times and Western Digital (WDC) at just six times through the wafer manufacturers (Lam Reserach (LRCX) , KLA-Tencor (KLAC) , Apllied Materials (AMAT) ) all trading at 10 or 11 times on up through Intel (INTC) at 13 times, very few names in the group appear over-valued versus broader equity markets. By the way, all three of those manufacturers exhibit absolutely stellar earnings growth, and sales growth over a three year period, though both KLAC and AMAT have experienced some erosion in Operating Margin.

The best name in the entire space for me is the already mentioned NVDA, even with the firm's 31 times forward looking earnings valuation. The performance is incredible. The balance sheet? Pristine. Gross profit margin of 63%, and climbing. Operating Margin of 36% and climbing. Three year earnings growth rate of 75%. Three year sales rate of 30%. It's as if I am making these numbers up. Sounds nearly as farcical as home run totals did back in the steroid era. No steroids though. Just high end GPUs that focus on the needs of gamers, the data center (aka the cloud), autonomous driving, artificial intelligence, or basically every significant business that requires the use of chips or chip based platforms. One such platform would be CUDA, the parallel computing and application programming interface. There is no way that I could explain this product in the space of one article. Think of it as a continuously growing and updating way for Nvidia to keep their clients loyal. An Amazon (AMZN) Prime if you will for the high end firms that need these chips in order to produce their own products.

First off, the entire space is more highly exposed to the pending trade conflict with China than are most industries. It's not just revenue exposure, but also in many cases manufacturing and distribution will be impacted as well. Micron reported in March. As feared, NAND demand was again proving to be cyclical in nature. This not only took a bite of MU, but competitors such as WDC and INTC at the time. Lam Research reported a week ago. The firm was conservative on guidance on forward looking shipments. Taiwan Semiconductor (TSM) cut guidance on (gulp) revenue.

I have not been kind to the industry myself. I am still long many of the names that I was long at the beginning of the year. My position size in many cases though is down to 10% to 15% of my original size. The only name in the space where I am still carrying a full load is Intel, and that is after selling a sizable portion and buying it back. On top of Intel, I have some kind of a long stake in NVDA, MU, (STX) , LRCX, KLAC, and AMAT.

I have tried to trade both NVDA and LRCX with some decent results. Both of these names seem to lend to the trader a bit of momentum that will allow for a few dollars overshoot in the direction of the day. You won't make a fortune, but it does feel pretty good to take advantage of traders that rely on algorithms while reading the sports pages every once in while. Best part is they never know. Don't feel bad for that crew. These are the same guys that have no idea what's going on in Asia when they wake up.

Perhaps my least favorite name in this space is Qualcomm (QCOM) . The name has given up 21% in 2018, has seen recent declines in both gross profit margins and operating margins. The firm sports three year earnings growth rates and three year sales growth rates of -6%. Outstanding. Oh, and on top of that, the public market is now saturated with smart phones, and is exhibiting signs of lackluster interest in paying a fortune for the latest model in that space. The stock is approaching low levels that were tested three times in 2017. QCOM passed all of those tests. Will it do so again? The firm is subject to headline risk regarding US tariffs, and Chinese regulators regarding the intended takeover of NXP Semiconductor (NXPI) . The name also appears to be closing in on a death cross. 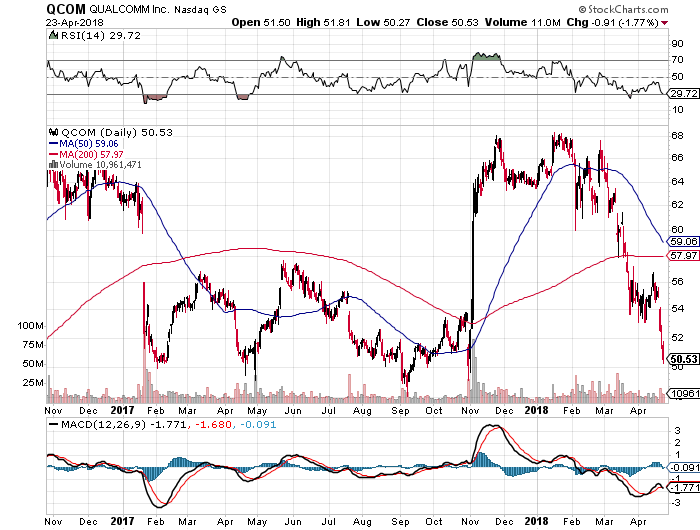 Best Case: Profit of $3.33. That happens if QCOM trades below $45 by June. (Should know more on tariffs sometime in May). Profit would be the $5 between strike prices less the initial debit.

Do You See What I See?

See where Micron is trading. Ugly right? More like ugleeeee. Yet, unbroken. Unbroken? What are you smoking, Sarge? Take a look my friends...it may be time to tip toe back in. Just a small piece at a time, friends. The evil rotation, the cyclical nature of NAND demand, and trade conflicts are still out there hunting you down like the dog you are.

Now, the name runs with a forward looking PE of 5, dudes. That means one of two things. Either the name is oversold, or the name is about to meet it's own version of Armageddon. Micron sports a very comfortable Quick Ratio, and wildly growing profit margins. Three year growth rates are strong for both earnings and sales. On top of that, the firm is not burdened by having to pay a dividend. (Dividend seekers wishing to play the space should find interest in either Intel for all around good performance and actual industry leadership, or Seagate for a higher payout, and a few more thrills than you bargain for.) 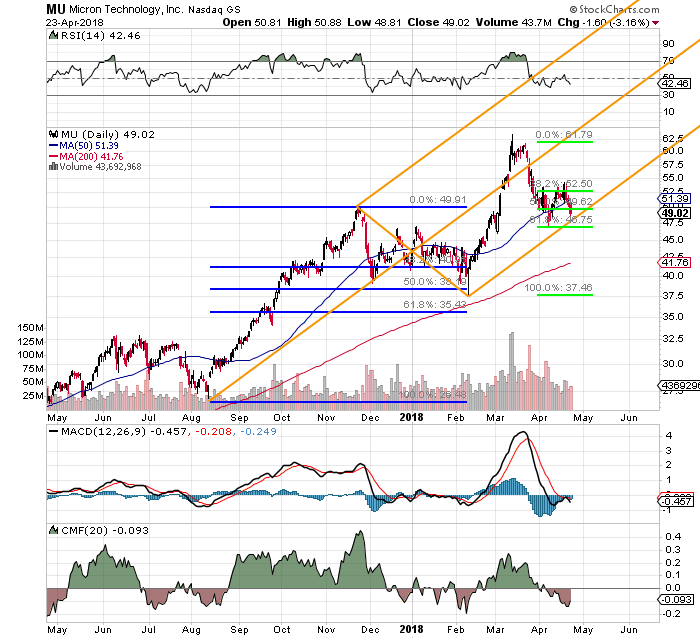 Currently, I am down to 10% of my intended long in this name. Today, I expect to take that number up to somewhere between 15% and 18%. Why, you ask? Easy, for the second time this month, the share price seeks the protection of both a 61.8% retracement of the low to high move of 2018, and at the same time, the lower trend line of our old friend the Andrews' Pitchfork.

Incredibly, after more than a 22% top to bottom free-fall, this name appears to be technically unbroken. Why buy just a smidge? That's all about having some dry powder, gang. The headline news situation is clearly fluid. Bad things could still happen to this stock, but the risk/reward possibility has turned in my opinion...in a more favorable direction.

Best Case: The stock rises in value, or decreases to a point where the chart again favors a small purchase.

Worst Case: The shares collapse. Rome burns. Civilization falls into ruin. The risk in this case is that you end up long 300 shares of MU by mid-June at an average price of 42.23, after accounting for the premiums that the trader raised on the initial trades.

Get an email alert each time I write an article for Real Money. Click the "+Follow" next to my byline to this article.
TAGS: Investing | U.S. Equity | Technology | Earnings | Economy | Markets | Stocks