We looked at Lowe's (LOW) charts and indicators in early December and we concluded that "LOW has some chart resistance above $80. It could challenge the resistance above $80 in the weeks ahead, but we are likely to see some sideways trading in the near term and intermediate term before an upside breakout."

Looking back at the price action since Dec. 8, we can see that view wasn't bad advice, as LOW was not able to break above $80 until early March. With a broad list of stocks turning higher this morning, a fresh look at the charts of Lowe's seems appropriate. Let's visit with the charts and indicators for a fresh strategy.

The On-Balance-Volume (OBV) line shows strength from early January into March, confirming the advance and a fresh new high would help confirm the current gains. The Moving Average Convergence Divergence (MACD) oscillator has been in a general bullish mode above the zero line since late November, and the two lines that make up this indicator are poised to cross to a fresh outright go-long signal.

In this weekly chart of LOW, above, we can see that prices are above the flat-to-rising 40-week moving average line. The weekly OBV line was in a decline from April 2015 until late 2016. It now looks like the weekly OBV line has begun to improve from a January 2017 low. The weekly MACD oscillator moved above the zero line in February for an outright go-long signal. The MACD oscillator is still bullish. 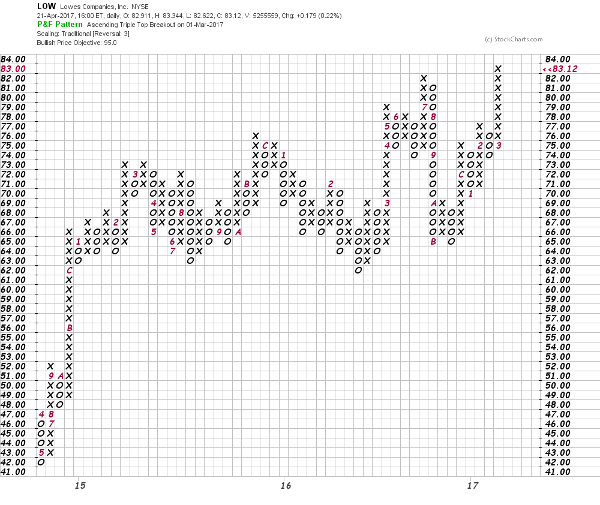 Sometimes breakouts on bar charts are not clear -- and that is when it pays to take a minute to look at a Point and Figure chart like the one above. In this chart of LOW, we can see the breakout trade at $83. The initial upside target for LOW on this chart is $95, but further gains would not surprise me.

Bottom line: LOW has broken out on the upside of a large consolidation pattern (see the weekly bar chart, above), and further gains are anticipated. Now, $83 is the breakout and traders could probe the long side of LOW as close to $83 as possible. A sell stop below $80 looks appropriate for now. The $95-to-$100 area is our potential price target.

Get an email alert each time I write an article for Real Money. Click the "+Follow" next to my byline to this article.
TAGS: Investing | U.S. Equity | Consumer Discretionary | Consumer Staples | Basic Materials | Markets | Stocks