Kimberly Clark (KMB) was reviewed in February, where I noted that, "In this Point and Figure chart of KMB a downside price target of $99.06 is shown but a trade down to $108.68 would be needed to weaken prices." Looking back at the price action since February we can see that prices began to accelerate to the downside in late March breaking below $108.68 and reaching the $99.06 price target. Now what?

In this daily bar chart of KMB, below, we can see a downtrend in place for the past twelve months. KMB is below the declining 50-day moving average and the declining 200-day line. The daily On-Balance-Volume (OBV) line moved lower from July to November telling us that sellers of KMB were more aggressive. The OBV line moved higher from November to late January suggesting that buyers were dominating but that trend has reversed in recent weeks. In the lower panel is the 12-day momentum study which shows lower lows in the momentum readings and thus no bullish divergence to suggest that the decline was slowing.

In this weekly bar chart of KMB, below, we went back five years to be able to show older support areas. Prices are below the declining 40-week moving average line. Prices have broken below the lows of 2017 and 2016. One has to look back to 2014 to suggest possible support zones knowing that the farther back in history you go the less reliable the support (or resistance) area can be. The weekly OBV line is in a long decline and tells us that sellers of KMB have been more aggressive since early 2017. The weekly Moving Average Convergence Divergence (MACD) oscillator is bearish.

In this Point and Figure chart of KMB, below, we can see the recent April decline (look for the "4" on the chart) and the nearby price target of $97. A close below $95 will probably open the way for further declines. 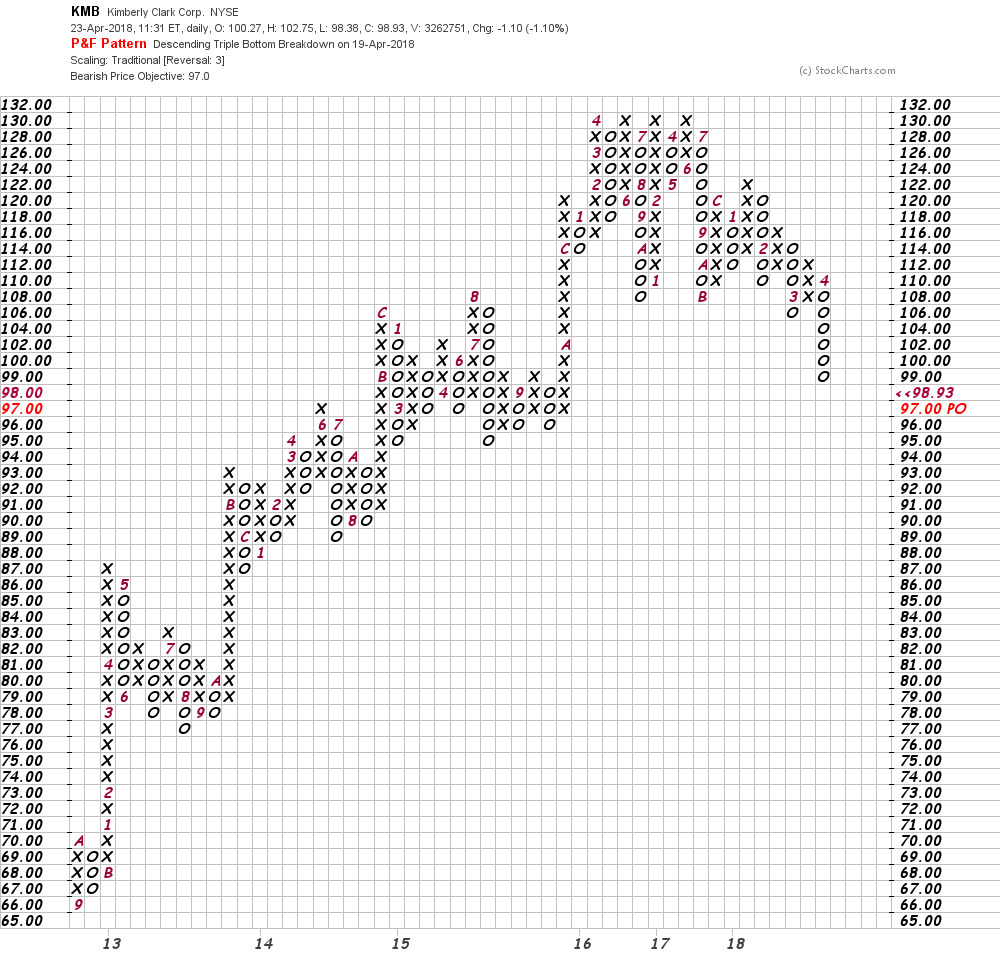 Bottom line -- KMB is stretched to the downside but that does not mean it cannot fall further. An oversold market can get more oversold. KMB might be considered "cheap" now and attractive from a fundamental perspective but we have no signs that the downtrend is over.

Get an email alert each time I write an article for Real Money. Click the "+Follow" next to my byline to this article.
TAGS: Investing | U.S. Equity | Consumer Staples | Consumer | Stocks