Action Alerts PLUS holding Snap-On (SNA) jumped higher this week, but is this enough to restart its uptrend? SNA shares saw a fair amount of liquidation/selling from the beginning of February until last week. In just a couple of sessions, SNA has shot straight up above the 200-day and  50-day moving averages.

The rally is welcomed, but is it enough to get SNA to break out over its 2017 high? Let's see what is in our technical tool box, starting with this daily bar chart, below.

In this daily bar chart of SNA, above, we can see a decline from May to a small double bottom in October and November. Prices rebounded fairly rapidly to a new high in January. Another retracement developed, erasing about 50% of the prior advance. The On-Balance-Volume (OBV) line remains steady throughout the first decline but it gives back all  its gains in the second, more recent decline. Overall, I would not consider this OBV pattern as bullish. The trend-following MACD oscillator moved below the zero line in February as prices fell. This tool only just gave a cover-shorts buy signal and is still not above the zero line for an outright go-long signal.

In this weekly chart of SNA, above, we get a longer-term perspective on the price action. SNA has performed strongly when the 40-week moving average line has been rising. The weekly OBV line moved up strongly in 2014 and into 2015, but its progress has been uneven since. The weekly MACD oscillator turned down in February, flashing a liquidate-longs or take-profits sell signal. The two moving averages that comprise this indicator are just starting to narrow and a crossover buy signal is not imminent. 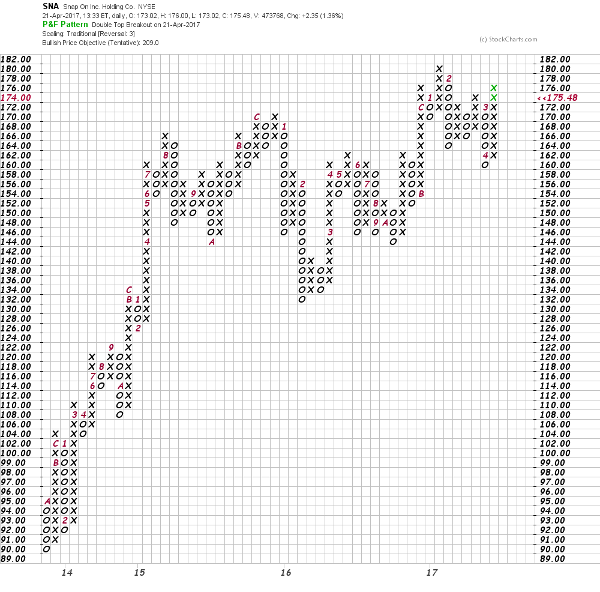 In this Point and Figure chart, above, we get a much more bullish outlook for SNA. There is a recent double-top breakout at $176 and a more important upside breakout will occur when SNA trades at $182. The potential upside price target will be $210 or so.

Bottom line: After the recent rapid run-up for SNA, a period of consolidation would be in order. After some sideways price action, traders could probe the long side of SNA and add on a move above $182. Our price target is $210 and I would risk $167.