"You can't create a monster, then whine when it stomps on a few buildings."

Monster In Your Closet

Something was learned in Thursday trade. That something is still feared. That something .... is inflation. Oh, the central bank has jawboned us long enough. Markets were rattled off of their highs back in January at the somewhat premature thought of what a pop in wage growth might do. Yesterday, even with a marketplace trading at significantly lower valuations, the creature from beneath your bed, or from the darkest recesses of your closet can still spook the marketplace.

Yes, Veronica, upward pressure on consumer level inflation is real. Very real, and the good people of the realm will understand this soon enough. To cement the concept in your pretty little heads, just take a look at the Bloomberg Commodity Index over the past year, as dollar valuations have declined. See where the heights that his index have reached this week? See where it was in January? 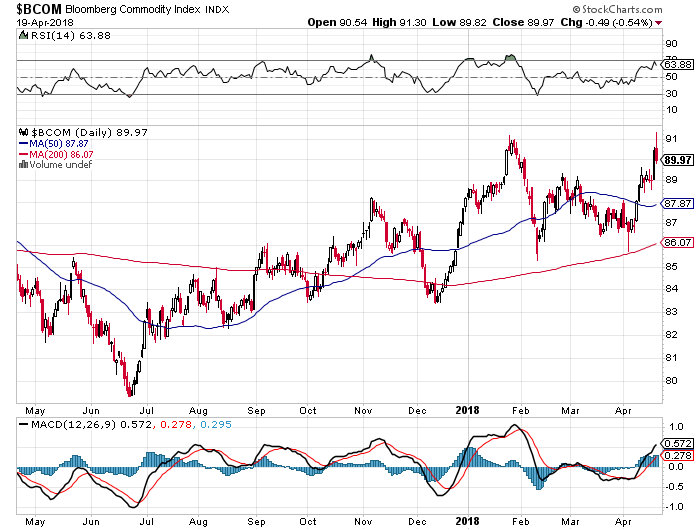 It's not just this. Take a gander at the April edition of the Philly Fed, probably the nation's most important regional manufacturing survey. Overall, the survey posted a very healthy looking and expansionary 23.2. Pop the hood, and what do you see? The Prices Paid component printed at an incredible 56.4. That my friends, is a seven year high, and up dramatically from a very strong 42.6 in March. This comes despite the apparent slowing of growth for the most important item in any manufacturing survey... New Orders (18.4, down from 35.7).

This wonderful news came after the Fed released the Beige Book on Wednesday, and seemed to almost signal fear regarding the impact of trade tariffs on the economy. We all read "Business(es) generally anticipate further price increases in the months ahead, particularly for steel and building materials," Hmm.

At what point do tighter monetary conditions mortally wound equity markets? The ten year is now yielding close to mid-February levels as a result of these inflationary pressures. The central bank is still pushing out the short end. At least the spread between the two has "gapped" up to 48 /49 basis points, which is why the banks caught a break yesterday. I remain long both Citigroup (C)  , and JP Morgan (JPM)  , and have recently added additional short positions in out of the money puts for both of those names.

The Cleveland Fed's Loretta Mester spoke last night. Mester is a well known policy hawk, and a voting member of the FOMC this year. She was cheerleading rate hikes again in this address. Mester contends that raising rates "ensure we avoid a build-up in risks to macro-economic stability that could arise if the economy were allowed to overheat." Now, you all know that I am a believer that money and credit are assets, and their value should be reflective of free market pricing. I was never on board with all of the loose policy that propped up the markets over this long, painful economic "recovery."

That said, I can not find anything in Mester's address covering balance sheet management. Does not anyone else feel that increasing short-term rates on schedule while drawing liquidity from the economy on an incrementally increasing basis is the least bit dangerous? Talk to the people? Yes, the economy is improving, but the folks? Many are still way behind. Taking a pass on that fourth rate hike later this year would only be appropriate (in my opinion), especially if the quantitative tightening program is to stay on track. By the way, the probability of that fourth 2018 increase in the Fed Funds Rate target, as priced in by futures markets in Chicago, now stands at 42%. Those odds were priced at 18% when Jay Powell took the oath.

A major part of the commodity story has been the oil story. Geopolitical concerns have put a bid under crude as key WTI technical levels at both $64 and $68 have cracked from below. Today both OPEC and non-OPEC oil exporters are meeting in Jeddah, Saudi Arabia. We all know that market prices for crude seem to run up in front of these meetings, and often enough lapse in the aftermath.

These exporters have been holding back production since January of 2017. Though it could hardly be considered to be unwise for one to take some profits out of the space given that trend, keep in mind that oil watchers are not expecting much more than a focus on market fundamentals today. Though US shale production is here to stay, the rig count in this country has not been a run away train, and the global oil glut that weighed down prices has largely dissipated.

My thoughts on this are simple. Demand for oil stays high, globally. For me that means that oil services remain the better investment than exploration. While some of the exploration names provide some nice dividend income, I will continue to hang onto Schlumberger (SLB) , and Halliburton (HAL) . SLB reports this morning. This Schlumberger call is probably the best, and most honest assessment of oil markets that investors might receive on a quarterly basis.

I may buy some of this today. No joke. 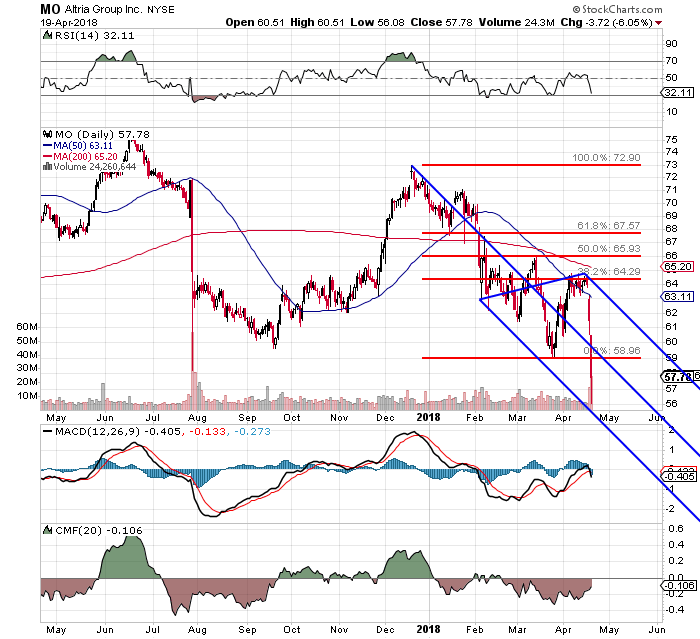 Call me evil. For one, I have no problem whatsoever with profiting from tobacco. On that day that you are wet, cold, covered in slime, and know you won't be able to seek shelter for another week, while having to remain motionless and silent... there is nothing in this world better than a good chaw. As you can see, this name fell out of bed while Phillip Morris (PM) was taken out behind the barn yesterday after that form reported. This firm Altria (MO) reports next Thursday. The chart is absolutely disgusting.

The daily MACD, Relative Strength, and Money Flow would all call the investor crazy for getting involved. The Fibonacci model that needed to hold at 59, simply did not. Do yo see what did hold? That's right, the lower trend line of our old friend...the Pitchfork.

Does resistance show at 59 on any rebound? Perhaps. You know...last night they were still paying 1.23 for June 15 $60 calls. Hmm. You kids know what a buy-write is? This is my thought in minimal terms. Obviously gang. there is risk.

This done, the investor has bought 100 shares of the stock at a net effective cost of 56.55. Very close to yesterday's disastrous bottom of 56.08. You still have equity risk. You may have to sell the shares at 60 in June if you do not cover the short options position. You'd be okay with that, right? Oh, and if you end up owning the shares for a while, they pay 4.85%. Better than a sharp stick in the eye.

Get an email alert each time I write an article for Real Money. Click the "+Follow" next to my byline to this article.
TAGS: Investing | U.S. Equity | Financial Services | Energy | Consumer Staples | Economic Data | Economy | Markets | Oil Equipment/Services | Stocks