Campbell Soup (CPB)  has not been attractive technically since the summer as it declined from near $68 to $53 by November. Prices recovered from November to February with a rally from $53 back up to $64. This rally ended abruptly with a gap to the downside and a decline to $56. A nimble trader may have been able to profit from those up-and-down swings but that may mean you won't be inclined to expect much from the next rally.

The next move to the upside could surprise in the next few months but don't take my word for it. Let's look at the latest charts and indicators and see if you agree.

In this daily bar chart of CPB, above, we want to focus on the price action this year. In February CPB turned down and then gaped to the downside. Volume was heavy. Prices moved sideways for a few weeks and then slipped lower into April. The decline was relatively sharp and included a gap but look at the On-Balance-Volume (OBV) line -- a small dip on the gap and then it improves before turning down again in March.

Overall, I would say that the bulk of the accumulation or buying in November-February stayed with those positions as prices declined. Now look at the 12-day momentum study. Momentum makes a higher lower from March to April while prices make lower lows. This slowing decline suggests that someone has bought on the decline and this probably foreshadows a rally in the days and weeks ahead.

This weekly chart of CPB, above, is bearish but it is also close to some positive reversals. Price-wise, CPB is poised to make a two-week reversal. A low close last week followed by a high close this week. The slope of the 40-week moving average line is pointed down but it is close to the current price and CPB could close above it.

The weekly OBV line has dipped in the past month but it is a shallow dip and it should not take much to see the line move up to a new high. The weekly MACD oscillator just moved below the zero line, so like the other signals noted above, it won't take much of a rally to produce a fresh go long signal. 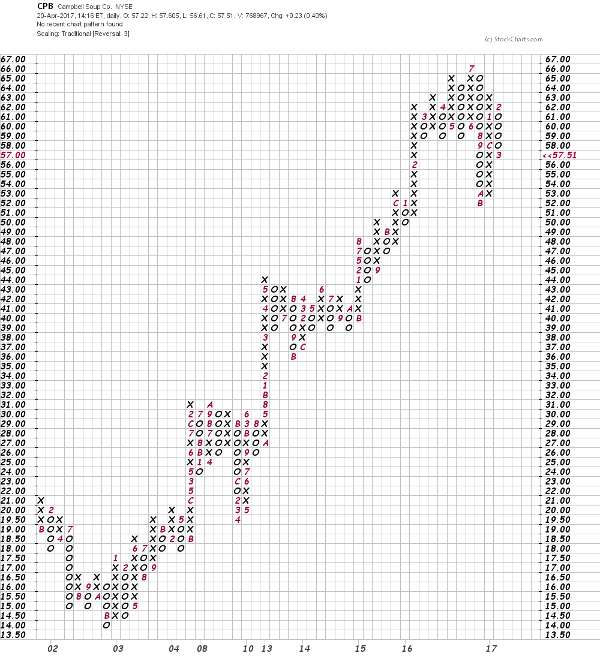 This Point and Figure chart of CPB, above, looks toppy but a trade above $63 or $64 would turn things more positive.

Bottom line: You may not be interested in soup as the weather turns warmer but as investors you may want to check out CPB. Consider the long side, risking a close below $55.

Charting 2 Household Names That Are Going Their Separate Ways

The technical signals for Clorox suggest more downside ahead, while Coca-Cola looks like it's preparing to head higher.