Maybe the public never hears of this if the video never goes viral. Two men arrested by six police officers as they reportedly wait for a third man with whom the two had scheduled a meeting. Two African-American men. One would think a business such as a coffee house would welcome a group of three planning to meet at this kind of establishment. The store manager at this particular location, a Starbucks (SBUX) in Philadelphia, did not see it that way. That manager called law enforcement with a trespassing complaint, indicating that the two men had not placed an order and refused to vacate the premises.

Was this complaint lodged only because the men in question were of African-American heritage? That's what former CEO Howard Shultz seemed to say on CBS television yesterday. Other customers are seen on the video trying to stick up for the two men, and obviously, the two were released after Starbucks did not press charges. This is disturbing, however, or at least it should be. There has been broad public outrage. As a middle-aged man of Irish ancestry, the very thought of being arrested while waiting for some kind of associate at a coffee house is foreign to me. I really cannot imagine it, and quite frankly neither should anyone else.

Ever hear of YouGov? This firm does a "buzz score" for businesses based on what people are hearing about individual brands. According to MarketWatch, this score can range anywhere from -100 to +100, with zero being perfectly neutral. Since last Friday, that buzz score for Starbucks dropped from +13 to -8, and this survey was done prior to a second video making the rounds that shows a Starbucks location in California denying another African-American use of their restrooms.

The company has at least tried to tackle this problem directly. The current CEO, Kevin Johnson, has publicly apologized. There are 8,320 corporate stores located within the United States. Those stores will close for part of the afternoon of May 29 for employees to undergo anti-bias training. Starbucks will put their folks through a program that will be designed to address unconscious bias, and to make all potential customers feel welcome.

Have you ever been trained to be able to tackle a new task? It's not easy. Takes far more than a couple of hours. How about being trained to change the way you think, especially if that thought process is unconscious?

Putting aside time to get after this is a positive. To be more effective, there will have to be something done on a more continuous basis, and there will have to be open communication. I am no expert, but I do have some life experience. I have seen, and I know that there is good and bad in everyone. I also know that without conscious effort, we are all capable of allowing ourselves to mentally go places that are unhealthy... for us, and for others.

Own the stock?.... No. The stock has traded precisely sideways for nearly three years, and has returned less than 2% in the last 12-month while the S&P 500 has given you 15.5%. On top of that, I am not a fan of the coffee, unless say I am stuck in an airport, and need a cup, a Starbucks happens to be right there, and the line isn't awful. Then maybe. Otherwise, I'll go elsewhere.

The stock is mildly expensive, trading at 21 times forward looking earnings, and just 19 times trailing earnings. Maybe that means something good is coming down the pike? Though somewhat cheaper under these parameters, Dunkin' Brands Group (DNKN) also trades at higher multiple going forward than looking back. One thing going for DNKN is a short interest that runs at 14.8%, as compared to just 2.3% for SBUX.

For my taste buds, and for my portfolio, you're not going to beat a McDonald's (MCD) cup of coffee. This is a name that I had held long-term, and then sold in 2016. I took a nice profit on that trade, thinking I was real smart only to watch the shares climb in price all year in 2017. This one really ticked me off, by the way. March offered opportunity. I swung at the fat pitch. Long about 15% of my intended position, I wait. I wait either for the dip that allows me to get longer, or the pop that offers me a larger profit.

What differentiates an investment from a trade? For me, it's simple. If I get my fill, it's an investment. If the name takes off before I get long enough, it's a trade. My target price for MCD is $175, which is also the January high. Where to panic? Not until the $141 level breaks. Have you tried the fresh beef yet? This is a home run for CEO Steve Easterbrook, in my opinion. It's as if I had never had McDonald's before. I believe. McDonald's reports on April 30.

The number that pops is 100 million. That's the milestone that membership numbers for Amazon Prime have surpassed. According to Statista, there were about 126.22 million households in the United States. Let that one sink in, gang. Prime provides to the parent a recurring revenue stream that keep the customer base loyal. So, how happy are the customers?

According to the American Customer Satisfaction index, Amazon has taken first place for eight consecutive years. Hmm. By the way, according to the Harris Poll, the employees feel the same way as the customers. Whoa.

Want to go to Amazon Web Services? The rapidly expanding service with the $20 billion revenue run rate? Yeah, that one. What's growing faster than cloud services? I can't think of anything either, and these guys are top dog. The firm reports quarterly numbers after the closing bell one week from today.

Yes, my friends, the Death Star is indeed just that, but for much more than simply retail.

Chart off The Day: Amazon (AMZN) 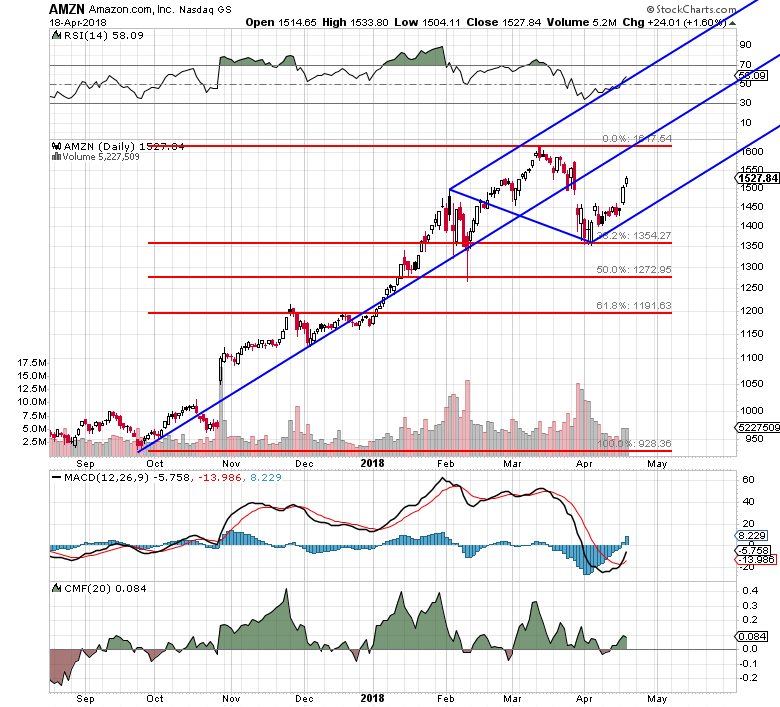 As the late Steve Irwin used to say, "Isn't she gorgeous?" Yes, I took half of my long position off in March. The president was beating up on Amazon, and I had to protect very large percentage gains in the name. Hey, thank goodness that I hung on to half. This chart is a beauty.

The daily MACD (moving average convergence divergence) just gave us a bullish cross-over. I think the minus signs in front to the 12- and 26-day exponential moving averages (EMAs) are easily explainable. Relative Strength is rising like a phoenix as well.

The truth is that anything can happen overnight next Thursday once earnings are released. If one is worried about protecting large gains in the name, one can never be second guessed for taking a profit.

Options become dangerous for some retail investors, because let's face it, the average kid cannot get his or herself on the hook either way for 100 shares of a $1,500 stock. Really, the powers that be should either consider splitting a stock such as this, or consider re-instituting the 10-share options contract for stocks with four figure share prices.

Note to Readers: I never thought that in my entire life that I would place $450 between target and panic for any stock. Is this nuts? No, gang, it's 2018.

Get an email alert each time I write an article for Real Money. Click the "+Follow" next to my byline to this article.
TAGS: Investing | U.S. Equity | Consumer Discretionary | Consumer Staples | Earnings | How-to | Newsletter | Politics | Stocks