American Water Works (AWK) made a steep correction to the downside in January and early February, but prices have since recovered and look like they are on surer footing now. Let's roll the dice and take a look at the charts and indicators.

In this daily bar chart of AWK, below, we can see a strong and supported rally from May to December. Prices were above the rising 50-day moving average line most of the time and the rising 200-day line.

The daily On-Balance-Volume (OBV) line rises from May to December and only makes a modest two month pullback before firming again. This OBV action tells me that despite the sharp price decline the buyers of AWK largely stayed with those positions.

The trend-following Moving Average Convergence Divergence (MACD) oscillator went to a sell in early January when it fell below the zero line but it is now back above it in a bullish mode.

In this weekly bar chart of AWK, below, we can see that prices spent a number of weeks below the rising 40-week moving average line this year similar to what happened in late 2016. The weekly OBV line hardly dipped and the weekly MACD oscillator is close to a cover shorts buy signal.

In this Point and Figure chart of AWK, below, we can see an upside price target of $87.58 being projected. This is not a new high but it is a start. A decline below $78.26 would be bearish. 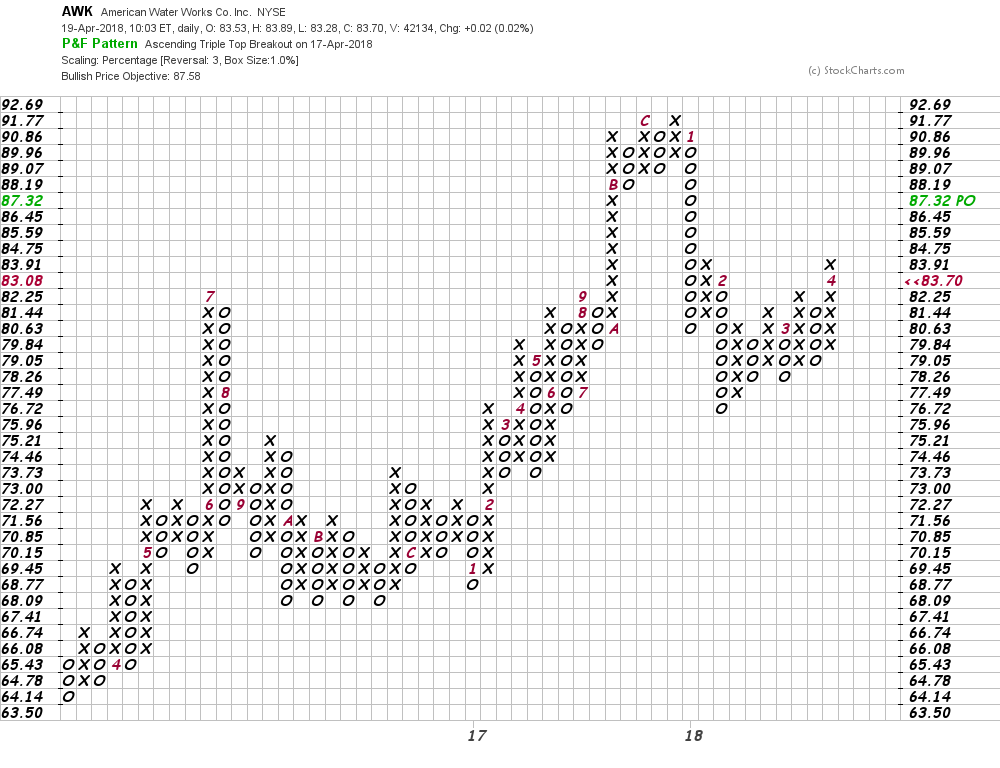 Bottom line: I don't expect to see AWK roar higher to erase the losses of earlier this year, but rather I envision a sideways to higher trading period between $83 and $90 before an attempt at new highs.

Get an email alert each time I write an article for Real Money. Click the "+Follow" next to my byline to this article.
TAGS: Investing | U.S. Equity | Utilities | Mad Money | Stocks

A Rare Beacon of Value in a Bubble-icious Market

The lack of opportunity for growth in this sector may just be its biggest strength right now.

Jim Cramer: Here's Who Would Bulk Up From a Big Infrastructure Bill

If a trillion dollar package were to happen, here are the companies -- and communities -- who would benefit most.

We don't have a reversal but I would not press the downside now.

The utility industry appears poorly insulated from the Covid-19 shutdowns and lockdowns, and shares of AEP could weaken more, according to the charts.