Myriad Genetics, Inc. (MYGN) was reviewed way back in August of 2016 where I wrote that, "How far MYGN will fall is a tough call at this point. It could work lower into the upper teens and if there is a bounce the $24 area will likely cap the upside (the midpoint of the gap)." With the benefit of hindsight we can see that MYGN declined to around $16-$15 by early 2017 before prices began to improve.

Prices rallied all the way back to the $40-$42 area but have corrected to the downside so far this year. Is this stock a buy? Hold? Or sell? Let's look at some updated charts.

In this daily bar chart of MYGN, below, we can see a sharp decline in early November and a sharp rise into late January - not easy to trade. Prices have been slowly declining the past two months or so, but volume has been light and price momentum has been improving. This suggests a rally ahead so let's look further.

Moving average signals always lag by definition. Last week we saw the 50-day line cross below the 200-day line for a bearish dead cross. It will take a rally above $31 to test or break the declining 50-day average line and a close above $32 to break the 200-day average.

Since October the On-Balance-Volume (OBV) line has been pretty featureless or flat - neither buyers nor sellers have been particularly aggressive. In the lower panel is the 12-day price momentum study which is showing a bullish divergence of higher lows from February to April when prices were making lower lows. This divergence could be foreshadowing a rally.

In this weekly bar chart of MYGN, below, we can see that prices declined to retest the lows of late 2017. MYGN is below the cresting 40-week moving average line but a rally above $32 would put prices above this longer-term indicator.

The weekly OBV line shows a rally from early 2017 to early 2018 and then a modest decline. Most of the buyers in 2017 have stayed with those positions.

The weekly MACD oscillator has just crossed the zero line for a sell signal but the two moving averages that make up this tool have already begun to narrow. This sell signal may well be short-lived.

In this Point and Figure chart of MYGN, below, we can see an upside price target of $32.78. A rally like this will not break all the overhead resistance but it is a good start. 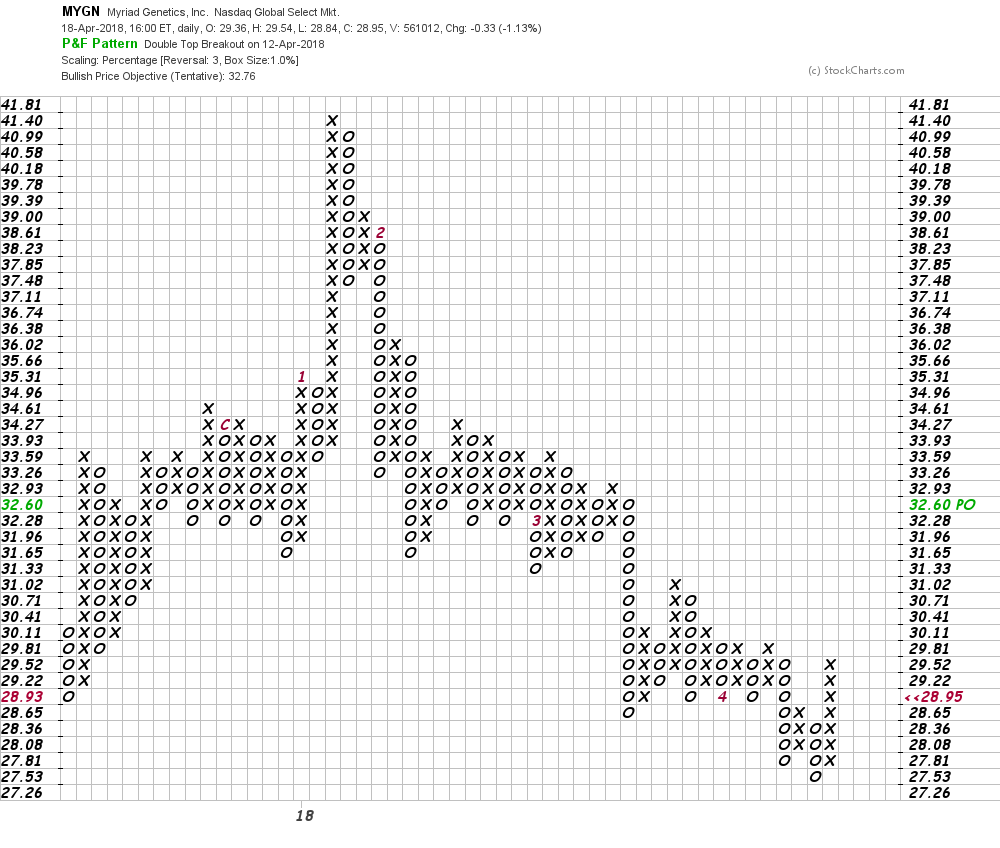 Bottom line: The trend is down but momentum shows a bullish divergence so traders should get prepared for a rally. Aggressive traders could probe the long side risking below $27 looking for a bounce into the $32-$34 area. A break above $34 will improve the chart more.

How to Play AstraZeneca as Earnings Approach

Let's see how the charts are shaping up ahead of the numbers Friday.