Our very own Jim Cramer interviewed Gary Wojtaszek, president and CEO of CyrusOne Inc. (CONE) last night on "Mad Money" and that prompted me to check out the charts of this data center REIT. The fundamentals sound strong but it is always a worthwhile exercise to check the charts and technical indicators. As Jim tells his viewers it is important to know the risks.

In this daily bar chart of CONE, below, we can see that prices have been trending lower from November. Prices broke below the 50-day moving average line in December and the slope of this indicator turned negative. The 200-day moving average line was broken in early January and by the end of the month we saw a bearish dead cross as the 50-day fell below the 200-day line.

The trend-following Moving Average Convergence Divergence (MACD) oscillator gave a cover shorts buy signal in early March and another one the other day. This indicator is not far below the zero line now. Crossing the zero line would be another positive for this stock.

In this weekly bar chart of CONE, below, we can see that prices are below the declining 40-week moving average line. The weekly OBV line shows a mild decline since November but the line may be turning flat now. The weekly MACD oscillator is narrowing towards a cover shorts buy signal on this longer time frame.

In this Point and Figure chart of CONE, below, we can see an upside price projection of $56. A rally to $56 would put CONE slightly below the 40-week moving average line. 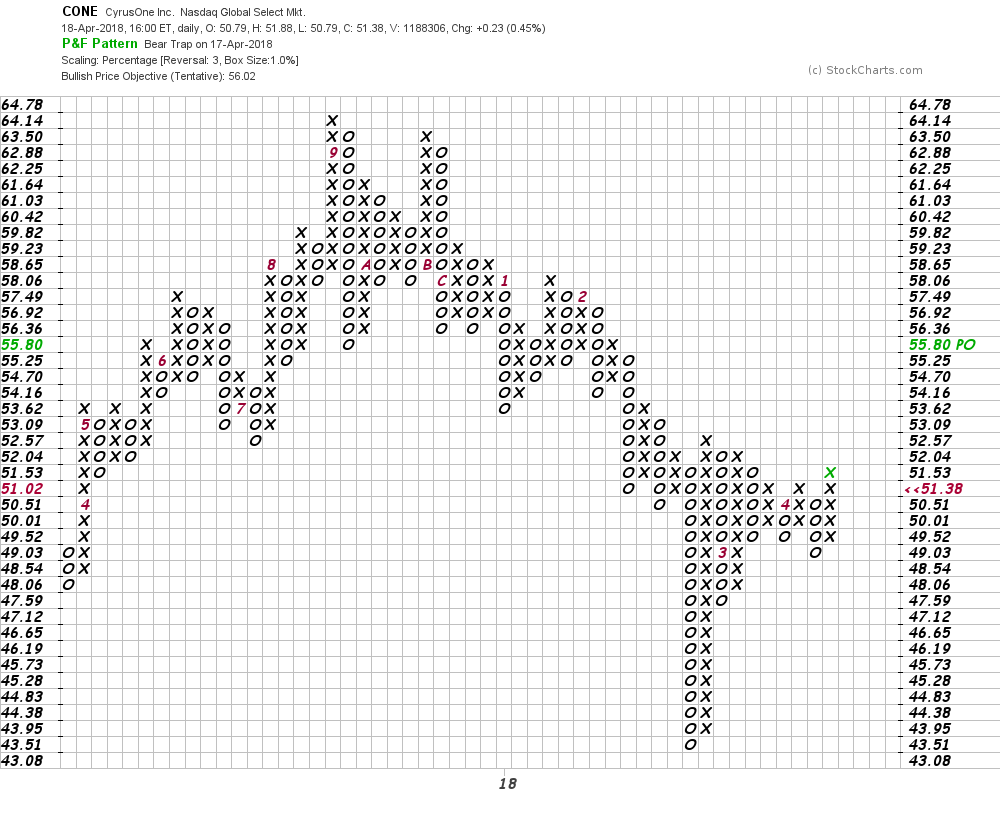 Bottom line: it looks like the correction in price that shares of CONE have made since November is coming to an end. More sideways price action is possible but aggressive traders could probe the long side of CONE on a close above $53 (the March highs) risking below $48.

Get an email alert each time I write an article for Real Money. Click the "+Follow" next to my byline to this article.
TAGS: Investing | U.S. Equity | Real Estate | Financial Services | Executive Interview | Mad Money | Stocks