We last looked at Royal Bank of Scotland (RBS) ADR at the end of 2016, when we concluded, "RBS has several months of resistance in the $6-to-$7.50 area and we are likely to see more sideways price action before RBS can attempt a rally into this resistance zone. Further downside testing of the $5-to-$4.50 area could also be possible in 2017." Let's examine the latest charts and indicators to see if our analysis from December needs updating.

In this updated daily bar chart of RBS, below, we can see that it was not until February that RBS was able to push briefly above $6.00, towards $6.50. Prices retreated quickly and have declined back into the $6.00-to-$5.50 area. Prices have rallied back to the 50-day moving average line today, but it remains to be seen whether this move up can continue. The 200-day moving average line is still pointed down/flattening/bottoming.

The On-Balance-Volume (OBV) line shows only modest gains from July to February and has weakened in the past two months. The pattern of volume activity is hard to read, but the declining OBV line since February tells us that sellers have been more aggressive. In the lower panel is the Moving Average Convergence Divergence (MACD) oscillator, which peaked in December and has now moved below the zero line for an outright sell signal.

In this updated weekly chart of RBS, above, we can see that the chart resistance in the $6.00-to-$7.50 area has not gone away. If we look close enough, we can see the probe of that resistance zone in February. Prices are above the 40-week moving average line, and that line is just starting to have a positive slope. Volume has actually declined in the past five to six months -- not what the bulls want. The weekly OBV line is not moving up with the price action and does not support the price advance. The weekly MACD oscillator has been above the zero line since last January, but it has just crossed to a take-profits sell signal. 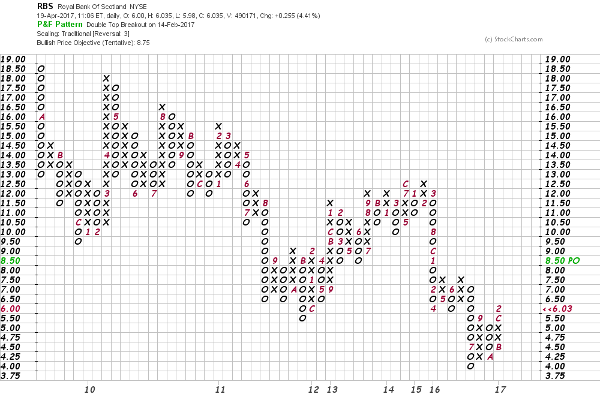 In this Point and Figure chart of RBS, above, we can see several months of resistance in the $6.00-to-$7.50 area. Further sideways-to-lower price action is likely before RBS may launch a rally to $8.50 -- the potential upside price objective from this chart.

Bottom line strategy: Between overhead resistance and a flat-to-declining OBV line, we have to side with the bears and look for a decline into the $5.50-to-$5.00 area in the intermediate term.