Barclays (BCS) looks vulnerable to further declines as volume has been lacking and the "trend strength" weakening. Since early December, Barclays has made a number of rally failures in the $11.50 to $12 range, telling us the path of least resistance may be down.

Barclays had been finding buying support around $11 since late December, but that level gave way this month. With next downside support not visible until the $9.25-$9 area, an update of BCS looks timely.

In this daily bar chart of BCS, above, we can see the quick June downside washout. Trading volume or turnover was heavy and suggests a measure of capitulation or "throwing in the towel." Despite the heavy liquidation, we don't see aggressive buying after the plunge. It took more than five months for BCS to recoup its June losses -- probably longer than most other foreign banks and not the kind of price action that says a great buying opportunity had passed.

There is a bullish golden cross of the 50-day and 200-day moving averages in late November -- well off the bottom -- again suggesting that going long BCS was a conviction recommendation. The On-Balance-Volume (OBV) line was flat from July to early November and then rose only modestly in November and December. From late March, the OBV line has weakened. The whole action of the OBV line since July does not support a bull move in BCS, unfortunately. The Moving Average Convergence Divergence (MACD) oscillator has been trending lower since December and it slipped below the zero line this month for an outright sell signal.

In this updated weekly chart of BCS, above, we can see a weakening chart picture. BCS is less than a dollar above the rising 40-week moving average line and a test of the line is likely in the days and weeks ahead. The weekly OBV line shows a weak or declining pattern from mid-2014 and the sharp plunge in mid-2016 has not been erased. Weakness in the OBV line the past four months points to weak prices in the near term. The weekly MACD oscillator gave a take-profits sell signal at the end of February and could slip to an outright sell soon. 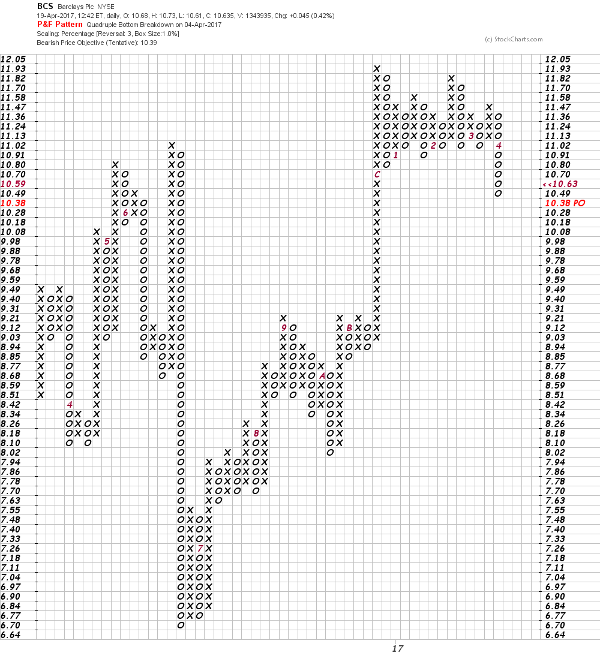 In this Point and Figure chart of BCS, above, we can see prices met a near-term downside price target but there is no support until the $9.21-$8.85 area.

Bottom line: Securities tend to move in the direction of least resistance and BCS has shown us this is likely to be down. I would look for declines to the $9.50-$9 area in the weeks ahead. Keep your powder dry.