Credit Suisse (CS) made a 60% rally from its early June low -- impressive. Over the past three months, CS has given back just $2 of its $6 mark-up. If you went long at $16 you may not be happy, but let's put some perspective on this.

Some 115 years ago, Charles Henry Dow wrote about markets correcting one third, one half or two thirds of the prior major move. CS has corrected one third of its prior advance.

Now that we know that the pullback in CS is normal, the next questions are: is the decline over and do we want to go long for hopefully the next leg to the upside?

In this daily bar chart of CS, above, we can see the seven-month rally phase from early July to January. Both the 50-day and 200-day moving averages responded to the advance, and the slope of the 50-day turned up in September and the 200-day in January. The 200-day average line is still rising, but the quicker-to-react 50-day average line turned down last month.

The On-Balance-Volume (OBV) made a strong advance from June to December, confirming the price gains. The OBV line has eased a little lower since December and suggests only minimal liquidation of the past four months.

There is a bullish divergence from the lower lows in price seen from February into April and the higher readings from the 12-day momentum study in the lower panel. This bullish divergence tells us that the pace of the price declines has slowed and this can sometimes foreshadow a turnaround on the charts.

I don't anticipate that the 40-week moving average line will be broken on a closing basis. The weekly OBV line is interesting, or a problem. The OBV line on this timeframe has been in a decline since early 2016 and only made a modest recovery when prices rallied 60% from their lows.

For the past five months, prices have been steady but the OBV line has declined to a new low. How should we interpret this "odd" behavior? Is it bullish that prices are steady when selling pressure, seen through a weak OBV line, is increasing? Or should we expect that prices will eventually get the bearish message from the OBV line?

In the lower panel is the weekly Moving Average Convergence Divergence (MACD) oscillator, which has signaled a take profits sell signal last month, when the two moving averages crossed to the downside. 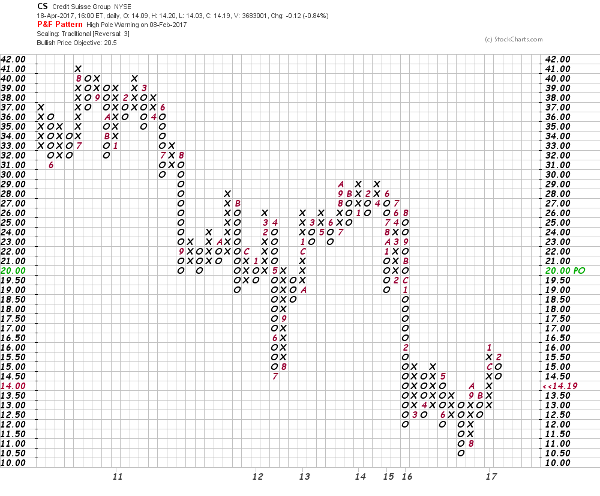 In this Point and Figure chart of CS, above, we focus just on the price action and ignore the volume and confusing indicators like the OBV line. We can see a bigger decline than seen on the one-year and three-year bar charts. Prices peaked in late 2010 around $41 and turned down to touch $10.50.

Most of the price action in 2016, on this chart, is a bottom formation that some books would call a fulcrum bottom. The rally to $15.50 was a breakout and yields a potential upside price objective of $20. Prices are currently in a down column (Os) with support at $14 and lower and a rally to $16.50 needed for a fresh breakout.

Bottom line: when I am confronted with a conflict or ambiguous technical indicator, I typically go with the price action. Volume is important, but price is more important. Keeping that in mind, with CS near support after a 1/3 retracement I would approach CS from the long side. Aggressive traders could go long here with a sell stop below $13 and they could add to longs on a close above $15.25.

Get an email alert each time I write an article for Real Money. Click the "+Follow" next to my byline to this article.
TAGS: Investing | U.S. Equity | Financial Services | Markets | How-to