Dollar General (DG) was reviewed in early December, where I wrote, "The price of DG has become a bit extended since early November so a sideways move or even a small downward correction would not be out of the ordinary. Traders and investors should use a shallow correction to probe the long side anticipating longer-term gains to the $120 area. A close below $86 would be my risk point." DG continued higher into late January and nearly touched $106. Prices corrected lower into early March before turning back up again. DG was also considered in Jim Cramer's Mad Money recap. Let's check out the latest charts today to see if we need to adjust our strategy.

In this daily bar chart of DG, below, we can see a strong looking chart. Prices did correct lower in March but notice the island reversal? Now look at the volume pattern and the On-Balance-Volume (OBV) line -- volume was not that heavy when prices gapped lower in early March but it was heavy when DG gapped to the upside. Light volume on the downside and heavy volume on the upside is what we like to see. The OBV line is largely steady from January and does not show much liquidation in March with the line actually now near its highs. The Moving Average Convergence Divergence (MACD) oscillator crossed below the zero in February and turned back above it this month.

In this weekly bar chart of DG, below, we can see that prices are above the rising 40-week moving average line and there was a test of that line in early March. The weekly OBV line made a peak in January and declined for six weeks before turning up again. The weekly MACD oscillator is narrowing towards a fresh go long signal.

In this Point and Figure chart of DG, below, we can see that a trade at $106 will be a fresh upside breakout and $120 is still the potential price target for this retailer. 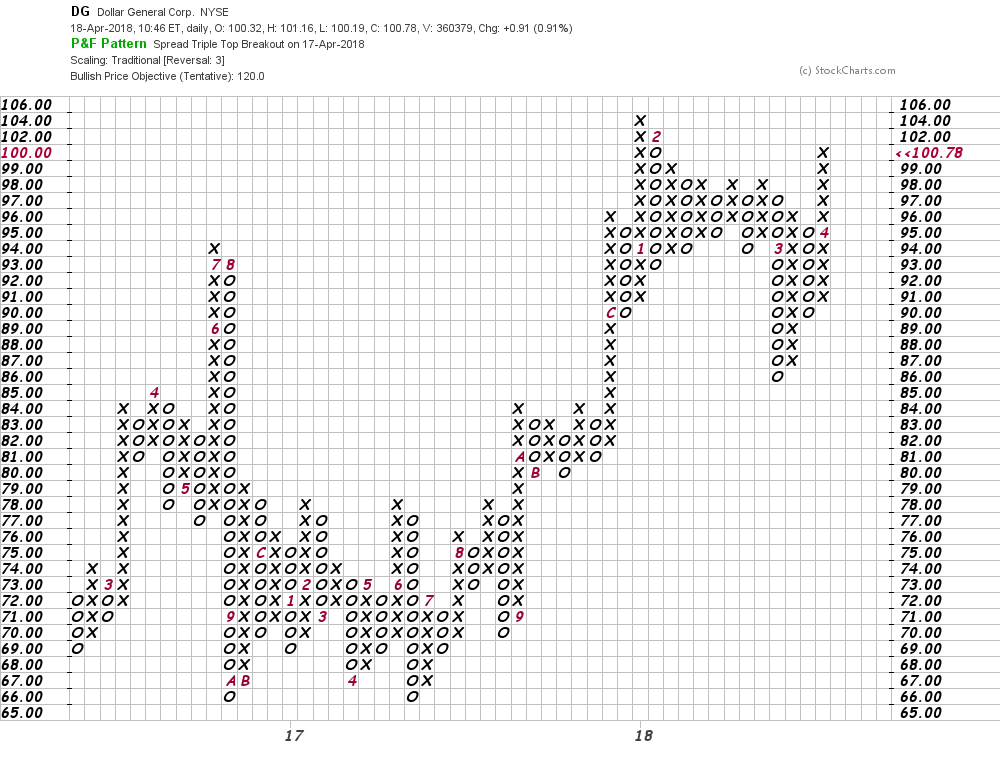 Bottom line -- DG could trade sideways around $100 before taking a run at the January highs. Traders should stay long risking below $90 now (up from below $86). $120 is our price target and aggressive traders could add to longs above $106.