Devon Energy (DVN) looks like it has run out of energy and the bears are gaining the upper hand. The next few dollars up or down could be critical to the balance of the year. Let's spend some time going over the latest charts and indicators.

In this daily chart of DVN, below, going back twelve months, we can see how DVN rallied from the April/May lows to a December/January high. As DVN traded sideways in January it eventually broke the rising 50-day simple moving average line. As DVN weakened in February it pulled down the 50-day average. In the first half of March DVN broke below the rising 200-day moving average line. DVN held the $38 level in late March and rallied to the underside of the declining 50-day average and the 200-day average before turning down. The 50-day average has also crossed below the 200-day average for a bearish death cross. The On-Balance-Volume (OBV) line is neutral, chopping up and down the the price action since August. The Moving Average Convergence Divergence (MACD) oscillator signaled a cover shorts buy signal in late March but it has since moved up to the underside of the zero line.

In this weekly chart of DVN, below, we have some warning signs. DVN is below the cresting 40-week moving average line. The weekly OBV line has been neutral/flat for the past five months. The MACD oscillator is crossing below the zero line for a weekly outright sell signal.

In this Point and Figure chart of DVN, below, we can see that the uptrend started in 2016 has been broken. DVN has met a short-term downside price target of $39 and there is support on the chart from $38 to $34 but that may or may not be significant in restarting the rally. 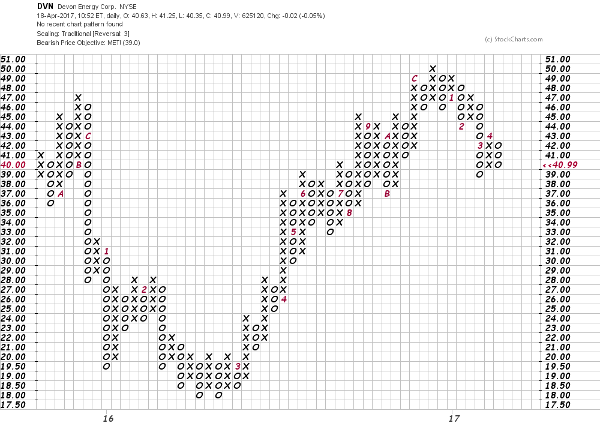 Bottom line -- a close above $44 will break the five month downtrend and a close below $38 will strengthen the bear case.