It's a showdown at the "OK Corral", with the Federal Reserve on one side and the massive bond market on the other side. They have both taken positions, dug in their heels and for the first time in a long while they are staring each other down.

It's not common to see divergences between these two factions, but that is indeed what we have currently. The stakes are high. Investors and traders are watching both sides carefully, but for now there is no clue, and that is why uncertainty is high, the volatility index is rising (one reason) and markets are on edge.

Who is going to be right this time around?

I am a big believer the bond market tells us what we need to know about the economy. Price action is the final arbiter of truth, and the price of bonds has been steadily rising on the longer end of the curve. The notion here is that inflation is not going to rise much, the economy won't grow that much, and getting a 2-3% yield on the long end of the curve seems a safer bet than stocks or any other asset class.

If the long end of the curve does not buy into the Fed's thinking (they hardly ever do, it's just the other way around), then a flat yield curve forces the Fed's hand to do something -- that would be lowering the funds rate yet again, probably toward zero. The Fed cannot seemingly create inflation with all the dollars sloshing around in the system. On a technical basis, the 10-year yield is very oversold (see relative strength). 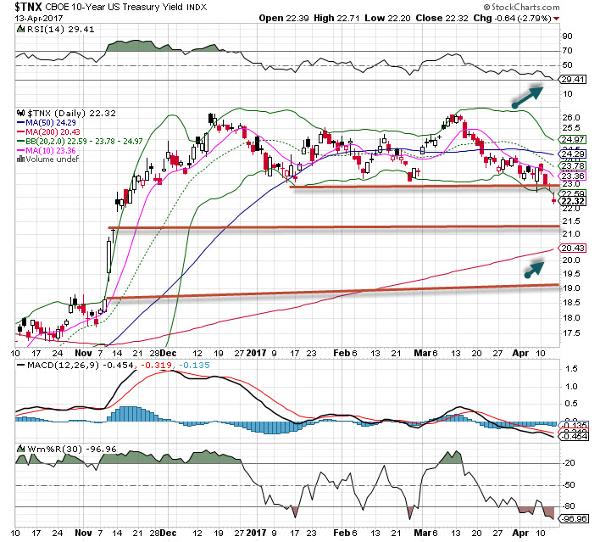 The bond market is usually right. In fact, the Fed often listens to the message of the bond market as part of its guidance. If that were the case currently, the Fed would not be in a rate-hiking mode, as the message being sent clearly is to keep rates low. Inflation expectations, while rising late last year, have started to decline; economic projections are not rising and the bond market is sniffing out this apparent weakness.

This time around, the Fed has established a verbal mandate and are raising interest rates on the short end of the curve. They see a strong economy -- certainly that cannot be argued with, judging by the strength in the employment situation. Even with last month's hiccup (probably due to poor weather, data reporting) the economy seems to be on sound footing. But is it good enough to handle several rate hikes?

That is the question for the bond market, and the traders are not believing it. The ratio between fed funds (overnight) and the 10-year Treasury yield is as narrow as it has ever been. The 10-year bond hit 1.3% just less than a year ago, yet the Fed Funds rate was 0.25% (the spread on the chart is dividing fed funds by the 10-year yield). 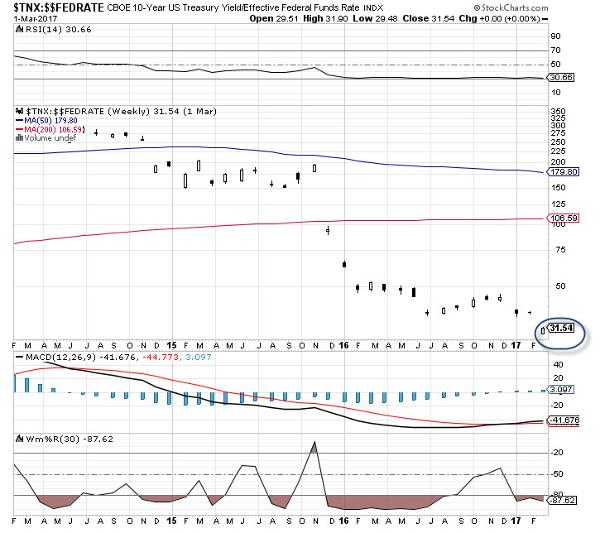 The 10-year yield has now broken and there is room to move even lower, threatening the Fed's thesis. That will move that ratio even lower.

The election was up for grabs back then, and Brexit had just "shocked" the world. This time around, there are other issues (geopolitical, European uncertainty) that cause some worry. Rates rose smartly off that low in July 2016. Barring any catastrophe, that should happen again, but not likely to the Fed's liking.

If that data come in poor, then it is highly likely the Fed will come to the side of the bond market's view, and chatter of fewer rate hikes will be heard. For now, let's wait and see how this plays out.

Get an email alert each time I write an article for Real Money. Click the "+Follow" next to my byline to this article.
TAGS: Fixed income | Investing | Rates and Bonds | Markets | Treasury Bonds | Financial Services | How-to | Risk Management