Canadian Solar (CSIQ) has been finding buying interest below $12, but this may not be enough to call an end to a long decline. CSIQ has been under selling pressure since mid-2014, and it will likely take a longer period of consolidation and base building to prepare CSIQ for a sustained rally.

In this daily bar chart of CSIQ, below, we can see a downtrend from April to November and a sideways pattern from September to now. Since September, the price of CSIQ has fluctuated above and below the 50-day moving average line. Currently, it has rallied above the flat 50-day moving average line and above the declining 200-day moving average. The price action suggests that buyers have come in below $12 a share to buy, but prices/buyers have not been strong enough to push CSIQ above chart resistance in the $15 to $16 area yet. Without breaking above nearby resistance and moving up to an uptrend, CSIQ is still in a neutral pattern.

The On-Balance-Volume (OBV) line has been neutral since September, and this flat pattern suggests that buyers have not become aggressive in acquiring shares of CSIQ. Bulls on the stock would want to see a rising OBV line before prices tried to push up through overhead resistance.

A rising OBV line would suggest that buyers had become more aggressive and that a new uptrend might be sustained. The Moving Average Convergence Divergence (MACD) oscillator just signaled a cover-shorts buy, but it remains below the zero line for an outright go-long signal.

In this weekly chart of CSIQ, above, we can see how prices have come down from $40 to near $10 over the past two years. Prices are back below the declining 40-week moving average line, but CSIQ did manage to close above the line for four weeks earlier this year. The weekly OBV line is neutral at best. The Moving Average Convergence Divergence (MACD) oscillator is below the zero line and in bear territory, but if CSIQ can rally from here, the MACD oscillator should follow and move above the zero line. 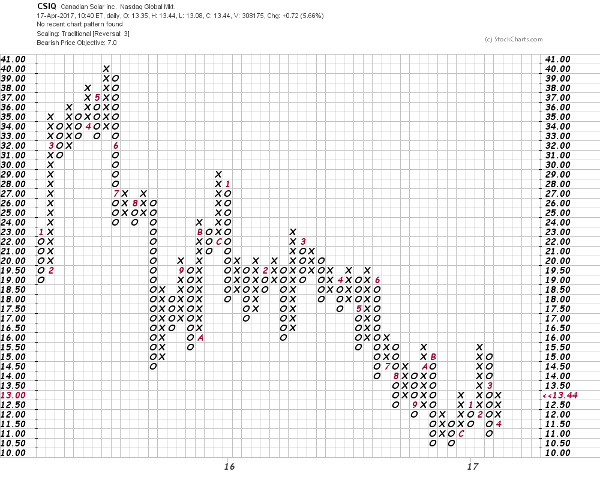 Bottom line: CSIQ could be bottoming, but more work and more improvement from our indicators are needed before the bear is sent back to hibernation.

Get an email alert each time I write an article for Real Money. Click the "+Follow" next to my byline to this article.
TAGS: Investing | U.S. Equity | Energy | Markets | Stocks | Agriculture